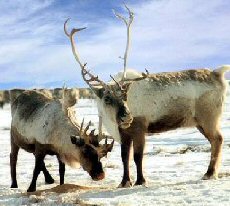 Unlike Rudolph the red-nosed reindeer, white reindeer really do exist in
Lapland.

Dreaming of a White Christmas?

A Russian couple were strolling down the street in Moscow, when the
husband felt a drop hit his nose. 'I think it's starting to rain,' he said
to his wife.

'I don't think so, it felt more like snow to me,' she replied.

'No, I'm sure it was just rain, he said.' Well, as these things go, they
were about to have a major argument about whether it was raining or snowing.
Just then they saw a minor communist party official walking toward them.
'Let's not fight about it,' the man said, 'let's ask Comrade Rudolph whether
it's officially raining or snowing.'

As the official approached, the husband stopped him and asked, 'Tell us,
Comrade Rudolph, is it officially raining or snowing?'

'It's raining, of course,' he answered and walked on. But the woman
insisted: 'I know that felt like snow!' To which the man quietly replied:
'Rudolph the Red knows rain, dear!'
See more on Rudolph the Red Nosed Reindeer 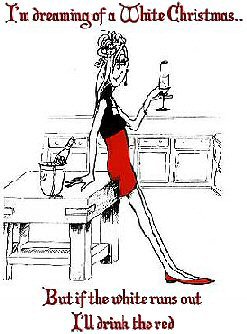 Footnote:
Please send us your pictures of
white reindeer.