Patrick, of considerable fame after the true story at Portchester car park has another tale to tell:

On New Year's
day at about 3.30 in the afternoon, having enjoyed an excellent lunch with his wife,
children and grand children, Patrick knew it was time to take Roxy, his well-loved mongrel dog for his afternoon's
constitutional.

Unable to find his usually clutch of plastic bags for collecting the
Roxy's '
doings'
he called to his wife that he would take, instead, the fancy gift bag in which he had recently received a small present from his grand-daughter.

He strode purposefully down Leith Avenue
and into Hill Road, Roxy on his lead and the pretty gift bag swinging freely in his hand. The dog stopped on two occasions and Roxy's 'doings'
were transferred into the gift bag for later disposal.

Hill
Road narrows as it approaches Portchester railway station and joins with Station Road. A narrow path is the only pedestrian way under the railway bridge and it is very close to the road.

Patrick carefully
manoeuvred himself and the dog along the narrow path. At this moment, two youths aged approximately 13 or 14 years old came cycling, at considerable speed up the road. Shouting and laughing at Patrick, the
youths grabbed and stole the colourful gift bag and sped off into the distance.

Patrick and I have often wondered what happened next.

Opportunist thieves received a shock when they snatched an Austrian woman's handbag totally unaware, just like in Patrick's story, what it contained.

The
two muggers struck as Hilda Morgenstein, 42, was about to catch a train at Baden to the countryside with her daughter to bury the pet rabbit which was contained inside her handbag. She commented wryly,

'They saved us the trip - I told my young daughter that they were angels and were taking bunny to a better place.' Police are still searching for the couple of criminals.

Percy walks into the Tiberius Casino in Southsea and he is flabbergasted to see two dogs sitting at a
poker table playing texas holdem with three men.

'Yeah, but they ain't very good gamblers,' replies one of the players. 'Whenever one gets a good hand he wags his tail.'

Fiona is driving through small
villages in Yorkshire when she sees a sign in front of a house: 'Talking Dog For Sale'.

She rings the bell and the owner tells her that the dog is in the garden at the rear of the house. Fiona hurries round
to the garden where she finds the dog, a golden Labrador retriever sitting quietly.

'Do you talk?' Fiona inquires of the dog.

'Yes, I do,' the Labrador replies.

'Well!' exclaims the stunned Fiona, 'can
you tell me about it?'

The Labrador looks up and says, 'Well, I discovered that I could talk when I was pretty young. I wanted to help the government, so I told the SIS [Secret Intelligence Service] about my
gift, and in no time, at all they had me jetting from country to country, sitting in rooms with spies and world leaders, because no one figured a dog would be eavesdropping. I was one of their most valuable
spies for eight years running. But the jetting around really tired me out, and I knew I wasn't getting any younger so I decided to settle down. I signed up for a job at the airport to do some undercover
security wandering near suspicious characters and listening in. I uncovered some incredible dealings and was awarded a batch of medals. I got married, had a mess of puppies, and now I'm just retired.'

Fiona
is completely amazed; she goes back in and asks the owner how much he wants for the dog.

'£10, ten pounds, good grief and your dog is truly incredible. Why on earth
are you selling him so cheaply?'

'Aw, my girl, because he's a liar. He never did any of that stuff.' 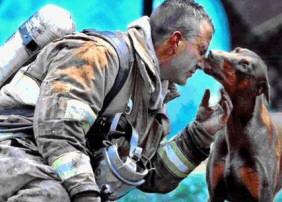 The dog is pregnant, the fireman had just saved her from an inferno in her house. The brave fireman rescued the dog by carrying her out of the house into her front yard, while he continued to fight the fire.

When he finally
got done putting the fire out, he sat down to catch his breath and rest.  A photographer from the Charlotte, North Carolina newspaper, noticed her in the distance looking at the fireman.

He saw the dog walking
straight toward the fireman and wondered what she was going to do.  As he raised his camera, she came up to the tired man who had saved her life and the lives of her unborn babies and kissed him just as the
photographer snapped this photograph.