The study of unusual place names is called Toponymy.  Have you ever
lived in a place with a strange name?  What happens is that everyone
who lives there becomes oblivious of the name's amusing connotation.

Another common occurrence is that people in the area refer to the place with a strange pronunciation.  For example, I stayed for a while in charming village in Cornwall called Mousehole.
Did the people who live nearby pronounce it Mouse Hole?  No, they refer to it as 'Mousle', the aitch is silent.

Here are
Will and Guy's favourite examples
of toponymy, we hope that at least one makes you smile:

Will and Guy's Top Ten Selection of Funny Place Names May Make
You Laugh.....or at least smile.

The tourist trap in this town 15 miles north west of Ann Arbor
advertises:
"A MARRIAGE THAT BEGINS IN HELL HAS NO PLACE TO GO BUT UP!"

Footnote:
This last item was kindly sent in by Joy.
Please send us your unusual place name.

Boring in Oregon, USA - Paired with Dull, in Perthshire, Scotland 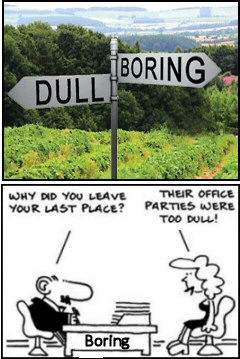 Would you believe such a funny story?  Will and Guy are fascinated
with the fact that these two places are linking their townships.

Boring, in Oregon, was named so after William H Boring a former Union
soldier and resident in the area. Dull, on the other hand, is a small
Scottish village and was possibly named after the Gaelic word for meadow or
perhaps snare - the true derivation remains unknown.

In order to improve tourism the two places have arranged to pair up. They
each could benefit by the sale of road signs, souvenirs and memorabilia.

Footnote:
Will and Guy believe there are dozens more
possiblilites for 'Twinning' towns in the manner of Dull and Boring.
Those on holiday are particularly likely to see unusual place names that
could combine humorously with their home town.

Play a Game of Twinning Towns, For Example

Romeo in Michigan, USA with Joliet in
Illinois, USA [Juliet].

There is village called Ugley in Essex, furthermore they have an Ugley
Women's Institute. **   We have also heard reports of an Ugley
Landfill site!

** Yes there is, they're in the Essex Federation of Women's Institute!  I used to live nearby.

The village also has a newspaper, Ugley Village Magazine
Indeed, the Ugley Friendship Club meets there.
Thanks to Hannu Ylioja for the extra information on this toponym.

Update, A.N. reports there
is an Ugley Landfill Site.  He points out the derivation of the word
/ village is from the Saxon description of Ugga's Meadow.

Footnote:
One for the men: 'Idle' Working Mens Club
near Bradford, Yorkshire.

It took us a while to find 'No Place', people reported it existed then
Stephen Scullion of Gateshead pointed the way to this hamlet near Stanley.
The nearest towns are Consett, Chester-le Street and Durham itself.
The name 'No Place' seems rather modern, that is 20th century.  As
usual, there are several theories for the origin of No Place, but our
favourite is that none of the local parishes wished to own this collection
of houses.

In Newark Nottinghamshire, there is a country road called: BIBLE
THUMPERS LANE!

The weekend of July 6th -7th 2013 saw the annual convention of the unique
'Association des Communes de France aux Noms Burlesque et Chantants',
(French villages and communes with funny names). Here's a selection of some
of the towns and villages who are proud members.

Their first official meeting was held in Minjocèbos ("eat an onion" in
Occitan , a hamlet of Saint-Lys ) in 2003. The location of this year's
annual get together was Vinsobres or "sober wine" in the Drôme department of
south east France.

Bouzillé -a quaint village in the Maine et Loire
department of western France has the same sound as "bousiller" the French
verb which means "to cock up" or "screw up".

Corps-Nud – meaning Naked Body, often inspires visitors
to this Brittany village to strip off to have their photo taken right next
to the sign.

Monteton - The Village of "My Nipple" is in the Lot et
Garonne department of south western France.

Trécon - The village of "Very stupid" or "Big idiot"
(Tres con, as it is written normally) is a charming little place in the
Marne department of north west France, but perhaps not one to have your
picture taken next to the sign.

Arnac La Poste - "Fraudulent post office", or "Post
office scam", whichever ever way you prefer. The key is 'arnac' which is
pronounced the same as the French word 'arnaque' which means "scam" or
"con". The village stands half way between Paris and Toulouse in Limousin.

Coubisou - The beautifully village of Coubisou is
situated in the Aveyron region of southern France and literally means "neck
kiss", whether that's because it's what the locals demand when you turn up
is unsure.

Footnote:
Please send us any good examples of funny place names (Toponyms) from your part of the world.
For example Stephen sent in: 'Pity Me', Durham, England.