The ultimate tomato throwing festival takes place in Buñol, Spain, on the
last Wednesday in August.

What Happens at the Tomatina Tomato Festival

While there are no official rules for the Tomatina, there is an
unofficial code of conduct.  For instance, tomatoes should be squished
before throwing.

The biggest
discrepancy between is supposed to happen, and what actually happens is the
wearing of shirts.  Officially, you are not supposed to pull another
people's shirt off their back.  Actually, anyone wearing a T-shirt soon gets it ripped
off.

However, I get ahead of myself, the Tomatina starts at about 10:00 am.
The plan is that before the first tomato is thrown, someone
must succeed at shinning up a greasy pole to reach the coveted ham at the top.  In
practice, the water cannons discharge a quick squirt of water and a torrent
of tomatoes is let loose on the crowd.  Thinking about it, what a great
idea to have an early morning start before the participants could do any
serious drinking.

Origins of the Tomatina Tomato Festival 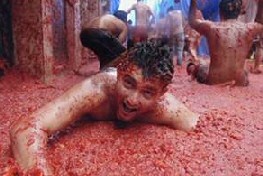 Although the festival has
only been going since the 1940s, what triggered the first Tomatina is
unclear, Will and Guy's favorite story is that a group of drinkers threw
tomatoes in an attempt to silence a particularly tuneless busker.

Will and Guy's Tomato Humour

Gordon Graham of Edmond, Oklahoma, USA, holds the honour of growing the
world's largest tomato, which he cultivated in his greenhouse some time ago
in 1986.

In fact, the entire plant became record-setting when it grew to 53 feet
and 6 inches, the longest tomato vine ever grown.

Tomatoes - Food for Health
A study at Harvard Medical School in 2001 of 124,000 men and women showed
that those who ate the most tomatoes reduced their chances of getting lung
cancer by 25%.

Robert, who was 6 years old, was looking at the red ripe tomatoes growing
in Farmer White's garden.  'I'll give you my two pennies for that
tomato,' said Robert pointing to a beautiful, large, ripe fruit hanging on
the vine.

'No, I can't do that,' replied Farmer White, 'I can get a dime for a
tomato like that one.'

So Robert pointed to a smaller green tomato, 'Will you take two pennies
for that one?'
'Oh, yes,' answered the farmer, 'I'll give you that one
for two cents.'

'OK,' said Robert smiling, sealing the deal by putting the coins in the
Farmer White's hand, 'I'll collect it in a week's time.'

Will and Guy's
Top Ten Tomato Fun Facts and Trivia