A zoo in California, a mother tiger gave birth to a rare set of triplet tiger cubs. Unfortunately, due to complications in the pregnancy, the cubs were born prematurely and due to their tiny size, they died shortly after birth. 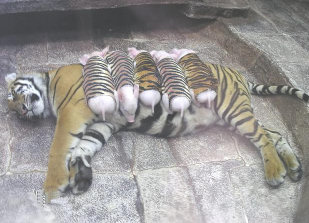 The mother tiger after recovering from the delivery suddenly started to decline in health, although physically she was fine. The veterinarians felt that the loss of her litter had caused the tigress to fall into a depression. The doctors decided that if the tigress could surrogate another mother's cubs, perhaps she would improve. After checking with many other zoos across the country, the depressing news was that there were no tiger cubs of the right age to introduce to the mourning mother. The vets decided to try something that had never been tried in a zoo environment. Sometimes a mother of one species will take on the care of a different species. The only ' orphans' that could be found quickly, were a litter of wiener pigs. The zookeepers and vets wrapped the piglets in tiger skin and placed the babies around the mother tiger. Would they become cubs or pork chops? Take a look...

What did the Tigress say when she taught her cubs to hunt? Don't go over the path until you see the zebra crossing.

This tiger has been the mother to this piglet for over a year now. Sai Mai, a tiger at Sriracha Tiger Zoo in Thailand's Chonburi Province has adopted a piglet 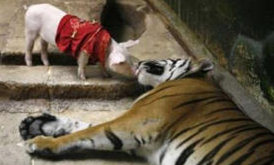 3) Also a Bengal Tiger in China - With Piglets

Three abandoned tiger cubs are being nursed by a pig at a zoo in China. The three Bengal tigers reportedly enjoy their playtime with their piglet foster brothers and sisters. A spokesman for Chimelong Xiangjiang Safari Park, in Guangzhou City, said the cubs had been rejected by their mother. He said that the cubs had rejected bottle feeding so the zoo bought a sow who had just given birth and brought her to the zoo with her newborn piglets. 'The tiger cubs are tamely sucking the milk, and the sow accepts her three new sons,' added the spokesman. 'We are feeding them meat as well now, and hopefully with the meat supplement they'll grow stronger'. 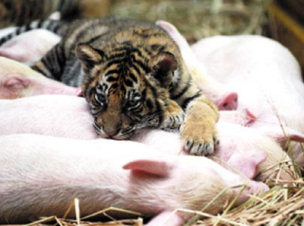 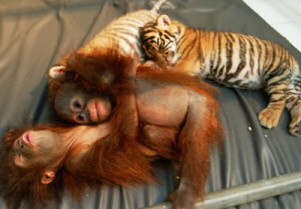 A pair of Sumatran tiger cubs and a set of young orang-utans, all abandoned at birth, have become inseparable after sharing a room at an Indonesian zoo. The friendship is not destined to last as tigers start eating meat when they are three months old and will need to be separated from their new playmates 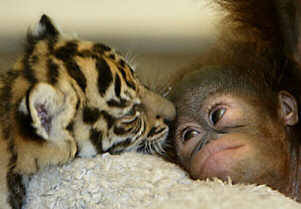 At their conservation refuge on Kaja Island in Borneo, Orang-utans have been learning some new behaviours by copying men.  Firstly they have learned to fish.  They have adapted several human techniques, hunting fish with spears, and also taking fish from unattended lines used by the men on the island. Secondly, the Orang-utans have learned to swim.  Previous naturalists had not realized that these apes could swim, but pictures confirm that they are comfortable swimming as they seek fish.  It seems their stroke is a cross between doggy-paddle and the breast-stroke. It is a shame these apes are facing extinction, it is tantalizing to wonder how much they could learn given the right circumstances. 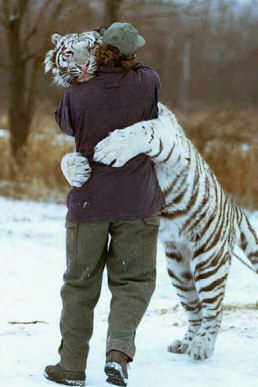 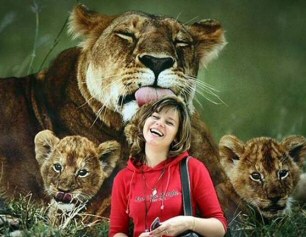 Footnote: Please send us your interesting pictures of lions or tigers.