Mrs Turner was stunned when she opened the bill from her electricity
suppliers Npower, particularly since she pays as you go by using a meter. 'I
shouldn't even be getting any bills from them because I pay in advance,' she
instructed reporters.

Will and Guy have worked out that to have a bill that large, Npower's 13p per
unit tariff, then Alison would have to consume 700 million units to rack up a
£90 million bill, which, even if she operated a domestic electric blast furnace
consuming 1000 units per day, would take almost 2,000 years. Alison, 50,
commented, 'I know electricity bills have gone up recently, but this is
ridiculous. I was shocked to say the least.'

We are pleased to pass on to our readers that Npower have since cancelled the
bill.

Freddy the Cat
Almost Gets the Shock of His Life 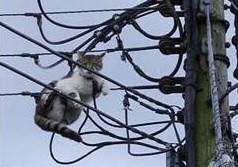 Will and Guy have discovered that poor Freddy spent almost 24 hours trapped
on 25 foot high power lines in Amesbury, Wiltshire, England.  He was seen,
hanging on and using up one of his nine lives, straddling the earth wire with
the rest of him inches from the live wires which undoubtedly would have
electrocuted him had he touched them.

Southern Electric Engineers, the RSPCA [Royal Society for the Prevention of
Cruelty to Animals] and the Fire Service rescued Freddy and sent him scuttling
home with a note attached to his collar.  Just how Freddy did not suffer a
fatal electric shock is a mystery know only to St Gertrude the patron saint of
cats.

Freddy's owner agrees that he is a scamp and suggests that it won't be long
before his gets up to more mischief.  Guy thinks that the picture above
right shows the sinister menace of an impending shock.

The Funny Tale of the Gas Bill

Commenting on a complaint from a Mr Arthur Purdey about a
large gas bill, a spokesman for North Westgas told Will and Guy, 'We agree
it was rather high for the time of year.  It's possible Mr Purdey has been
charged for the gas used up during the explosion that destroyed his house.'

Two
workmen were digging foundations when one of them started shouting and
jumping about.  The other one thought his partner had hit an underground
power cable and was being electrocuted so following good health and safety
practice used a shovel to separate him from the electricity.

Luckily for the
first worker he wasn't getting an electric shock but was panicking after a
wasp had flown up his trousers.  Fortunately he didn't get stung, but the second
worker hit him so hard with the shovel that his shoulder was dislocated.