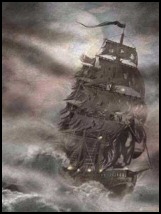 Will and Guy's collection of jokes, articles and amusing pictures of
the sea.

One morning the shipwrecked mariner noticed something floating towards
the deserted island that had become his home since his ship sank six months
ago. As the object came closer, he realized that it was a large barrel. He
very soon thereafter realised that hanging on to the barrel was a very
scantily clad woman. In fact she was the most beautiful woman he had ever
seen.

Arriving on shore the woman left the barrel and slowly and suggestively
walked toward the sailor. She whispered into his ear, 'I have something you
want!'

The mariner broke into a run towards to breaking waves yelling, 'Don't
tell me you've got beer in that barrel.'

Will and Guy's Five Favourite Seafarer Funny Jokes and Stories

# An "old salt" in the English speaking naval services is often a
raconteur, or teller of sea stories. Much of the history and traditions of
the naval services are passed from generation to generation of service
members by these sea stories as told and retold by old salts. Sea stories
may be truthful, half-truths, or falsehoods, however they always enhance
the reputations of naval and marine units, or individuals. 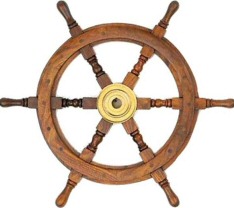 1. The Tale of Two British Sailors

PJ and Ross, two British sailors, attended a church service in
Cherbourg. Not speaking a word of French and not wishing to appear out of
place they sat behind an important looking man and when he stood up or
knelt down, they did the same.

At the end of the service, the priest made what was evidently an
announcement, whereupon the man in front of PJ and Ross rose to his feet,
and they did likewise - to a roar of laughter from the congregation. 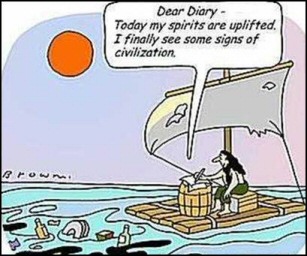 As the sailors left the church, the priest spoke to them in English, so
they asked him the reason for the laughter.

'Oh,' he said smiling, 'I mentioned that next Sunday morning there was
to be a service of baptism and would the father of the child please stand
up.'

Dave Foley, *MBE, is a friend of Guy and Will. He left the Royal Navy,
after serving 33 years, some years ago as a Lieutenant. This is a sea
story he told when he was a Petty Officer mechanic on HMS 'Pompey' [name
made up to protect the guilty].

The ship was returning to Devonport from a tour of duty as a protection
ship to the Antarctic research group. They were asked to transport some
penguins back to the UK. The penguins were about a metre tall. [Height is
important to the story].

As the ship arrived in the tropics and had begun to cross the equator
it was realised that the penguins might not survive in such high
temperatures. Quite sensibly the penguins were put in the showers used by
the NCOs [non-commissioned officers]; this group included Dave.

The penguins were a lively and friendly bunch and readily made friends
with the sailors, pecking and waddling around and enjoying the showers and
running water, which was keeping them cool.

Problems arose when the sailors went for their shower; the penguin's
beaks were at a dangerous level, which resulted in all NCOs having to
shower in their swimming trunks.

*Member of the British Empire. This rewards an achievement or service
in or to the community which is outstanding in its field and has delivered
a sustained and real impact which stands out as an example to others.

The power of the Chief Petty Officer in the USN is wonderfully shown
here in this funny story.

As a crowded airliner is about to take-off, the peace is suddenly
shattered by a five-year-old boy who picks that moment to throw a wild
temper tantrum. No matter what his frustrated, embarrassed mother does to
try to calm him down, the boy continues to scream furiously and kick the
seats around him.

From the rear of the plane, an older man in the uniform of a US Navy
Chief begins to make his way up the aisle. Stopping the frustrated
mother's upraised hand, the white haired, courtly, soft-spoken Chief leans
down and, motioning toward his collar, whispers something into the boy's
ear. Instantly, the boy calms down, gently takes his mother's hand, and
quietly fastens his seat belt.

All the other passengers burst into spontaneous applause.

As the Chief slowly makes his way back to his seat, one of the cabin
attendants touches his sleeve. 'Excuse me Chief,' she asks quietly, 'could
I ask you what magic words you used on that little boy?'

The Chief smiles confidently and gently confides, 'I showed him my
anchors, service stripes, and battle ribbons, and then explained to him
that they entitled me to throw one passenger out of the plane.'

Once upon a time there was a famous sea captain; we shall call him
Captain Philip Anson. This captain was very successful at what he did; for
years he guided merchant ships, from a world famous company, all over the
world.

Never did stormy seas or pirates get the best of him. Captain Anson was
admired by his crew and fellow captains. However, there was one thing
different about this captain. Every morning he went through a strange
ritual. He would lock himself in his captain's quarters and open a small
safe.

In the safe was an envelope with a piece of paper inside. He would
stare at the paper for a minute, and then lock it back up. After, he would
go about his daily duties. 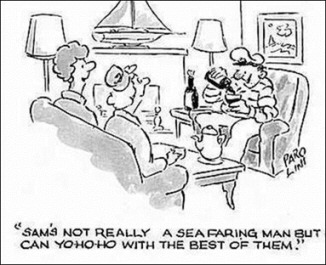 For years this went on, and his crew became very curious. Was it a
treasure map? Was it a letter from a long lost love? Everyone speculated
about the contents of the strange envelope.

Sadly, one day Captain Anson died at sea as he would have wished. After
laying the captain's body to rest, the First Officer led the entire crew
into the captain's cabin. He opened the safe, got the envelope, and opened
it.

Lieutenant Commander Andrew Craig, the first officer and the ship's
navigating officer, turned pale and showed the paper to the others.

Four words were on the paper, two on two lines:

The old and bold Chief Bosun noticed a new apprentice seaman one day
and barked at him to come to attention.

'What is your name?' was the first thing the Chief asked the youngster.

The Chief scowled, 'Look, I don't know what kind of bleeding-heart,
liberal pansy stuff they're teaching in boot camp today, but I don't call
anyone by their first name. It breeds familiarity and that leads to a
breakdown in authority. I refer to my crewmen by their last name only -
Smith, Jones, Thomas, Baker - that's all. I am to be referred to only as
"Sir." Do I make myself clear?'

'Good. Now that we got that straight, what is your last name?'
The
seaman recruit sighed and said, 'Darling. My name is Bert Darling, sir.'

Think of Trafalgar and you think of Admiral Nelson.  One of the
most famous association is the 'Blind Eye' incident. 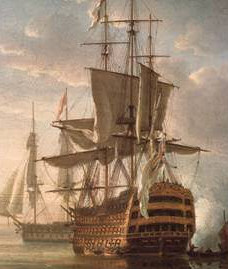 It happened during the battle of Copenhagen in
1801.  What happened was that the commander of the British
fleet, Admiral Sir Hyde Parker II signalled to Nelson that he stop attacking
and fall back.  Nelson refused and later remarked, that he had a
blind eye and sometimes had a right to use it.

Later Hyde Parker II admitted that had Nelson obeyed his order, then the
fleet would have been at risk from a counter-attack.

The Royal Navy and Marines are issued with fitness reports is the S206. The following are actual excerpts taken from
people's '206s'....

Jackson saw an old seafaring friend walking along the sea front at Southsea. 'Hello Harry,' he said, 'How are you?'
It was only then that Jackson realised that Harry only had one leg!

'What happened
to you?'
he inquired. 'My wife left me so I jumped in front of a train but it only took my leg off.'

Jackson then noticed that Harry only had one hand and in its place was a hook. 'What happened to
your hand?'
he asked.

'I tried it again, 'he replied,' and the train just took my hand off.'

Jackson, again noticed that Harry also had a glass eye. 'What's
up with your eye?'
he asked, this
time with considerable trepidation.

'Well,' said the Harry, 'after two
attempts to take my life I thought God doesn't want me to die, so I looked
to the sky and said 'thank you, God', and a passing
seagull made a deposit right in my eye ! ! !

'But you can't
loose an eye through bird muck.'
insisted Jackson.

Harry looked down at the floor and said, 'I'd only had the hook for three days!' 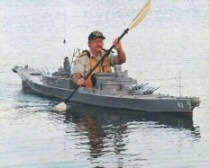 Details have been released regarding Britain's introduction
of the next generation of fighting ships. The Royal Navy is proud of the
cutting edge capability of the fleet of Type 45 destroyers.

Costing £750
million, they have been designed to meet the needs of the 21st century; in
addition to state of the art technology, weaponry, and guidance systems, the
ships will comply with the very latest employment, equality, health and
safety and human rights legislation.  See picture right.

The U.S.S. Constitution (Old Ironsides), as a combat vessel, carried
48,600 gallons of fresh water for her crew of 475 officers and men. This
was sufficient to last six months of sustained operations at sea. Unlike
ships today, she carried no evaporators (i.e. fresh water distillers!) .

Her mission: "To destroy and harass English shipping."

Making Jamaica on 6 October, she took on 826 pounds of flour and 68,300
gallons of rum.  Then she headed for the Azores, arriving there 12 November. She
provisioned with 550 pounds of beef and 64,300 gallons of Portuguese
wine.

On 18 November, she set sail for England. In the ensuing days she
defeated five British men-of-war and captured and scuttled 12 English
merchant ships, salvaging only the rum aboard each.

By 26 January, her powder and shot were exhausted. Nevertheless,
although unarmed she made a night raid upon the Firth of Clyde in
Scotland. Her landing party captured a whiskey distillery and transferred
40,000 gallons of single malt Scotch aboard by dawn. Then she headed
home.

Footnote:
Please send us your stories of the sea.