Will and Guy's
True Story - The Boarding Party

Trouble erupted on the Mediterranean island of Cyprus in the mid 1950's. The role of the
Royal Navy was to provide a squadron of warships to patrol the seas around the island to prevent arms and ammunition reaching the EOKA terrorists [Ethniki Organosis Kyprion Agoniston] led by General George
Grivas based in Cyprus.

This true story is about one of those Royal Navy warships as told to Will.

One calm and sunny
March day, HMS
Pompey* was
patrolling off the coast of Cyprus when on the radar and then later on the horizon, appeared a tanker flying the Italian flag. Orders were to stop all ships within territorial waters and this would be no
exception. The Italian tanker was told to heave to and a small motor launch set off to search the ship from Italy.

* HMS Pompey was not the real name of the Ship.

On the cutter was Petty Officer [PO] electrician Gawtry who was in charge of the boarding
party. PO Williams, who was a stoker, helped him and is, in fact, the person who told Will this tale. Other troops included a party of armed seamen. Throughout the story the reader must remember that PO Gawtry
was a real character, difficult to befriend, rather headstrong and very sure of himself. The seamen were armed with Lanchester submachine guns and the PO's
carried .38 revolvers, while PO Gawtry also carried a
Bren gun with bandoliers around his shoulders making himself look not only ridiculous but also like a bandit. What the boarding party expected to find was not clear.

The cutter pulled alongside the tanker
and a rope ladder dropped down the side. PO Gawtry climbed the ladder first. At the top he committed the first cardinal sin of boarding a suspect ship; as he climbed over the gunwale he handed his loaded weapon
to the nearest 'enemy' sailor. PO Williams was horrified. However, at this point all was well as the party was led to the bridge where they came upon the captain. He was a corpulent, small red-faced man who was
beside himself with rage at the indignity of being stopped at sea.

He ordered the party to leave his ship and bridge immediately and did not recognise nor acknowledge their right by marine law to read his
ship's
manifest or their right to search his hold for weapons. His pigeon English worsened as his fury rose.

PO Gawtry also became agitated and demanded that the Italian captain comply with the British
Government's
orders for those waters. As the captain became belligerent he advanced towards Gawtry who, struggling with the weight of the Bren gun and the bandoliers, attempted to pull his .38 from its holster.
As it left the confines of the holster the gun went off with an ear splitting noise.

The bridge emptied immediately of all tanker sailors and the seamen. PO Williams and PO Gawtry looked on in horror. The
captain fell to his knees babbling and bleeding, the top of his ear shot off. He gibbered to PO Gawtry that he could do what he liked and then he was to get off the ship.

Dumbstruck, PO Gawtry and the
party left the ship and returned to HMS Pompey*. It never came to light what, if anything, happened to Gawtry.

Names in this story have been changed to protect the guilty. Will has been assured that the
tale is true.

The Anglo-French navy needs a rousing motto in English.

The form used for Royal Navy and Marines fitness reports is the S206. The following are actual excerpts taken from
people's '206s'.... 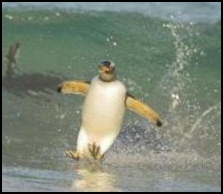 Dave Foley, MBE, is a friend of Guy and Will. He left the Royal Navy, after serving 33 years, some years ago as a Lieutenant. This is a story he told when he was a Petty Officer mechanic on HMS
'Pompey'
[name made up to protect the guilty].

The ship was returning to Devonport from a tour of duty as a protection ship to the Antarctic research group. They were asked to transport some penguins back to the
UK. The penguins were about a metre tall. [Height is important to the story].

As the ship arrived in the tropics and had begun to cross the equator it was realised that the penguins might not survive in
such high temperatures. Quite sensibly the penguins were put in the showers used by the NCOs [non commissioned officers]; this group included Dave.

The penguins were a lively and friendly bunch and
readily made friends with the sailors, pecking and waddling around and enjoying the showers and running water, which was keeping them cool.

Problems arose when the sailors went for their shower; the
penguin's beaks were at a dangerous level, which resulted in all NCOs having to shower in their swimming trunks.