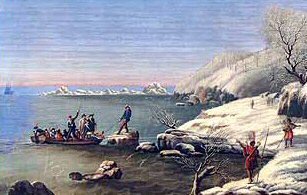 This is an early engraving depicting the Pilgrims landing; it's based on
1799 engraving by Samuel Hall.

While it represents an idyllic version of the landing this Thanksgiving
picture has charm.

However, historian criticise the picture on the ground that the costume
is more 1800s than 1620.  Also, according to contemporary journals the
Pilgrims did not meet Indians until several week after the initial landing.

What was the Pilgrim Fathers and Mothers favorite dance?
The Plymouth Rock 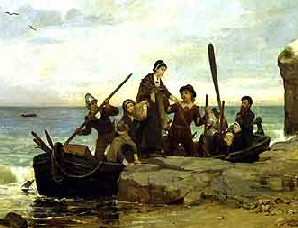 According to legend it was Mary Chilton who first stepped ashore from the
Mayflower at Plymouth Rock.

Mary was only 15 in 1620, unlike many including her parents, Mary
survived the first winter, and later married John Winslow in 1624.

Below is Jennie Brownscombe's interpretation of the Pilgrim Fathers
celebrating the First Thanksgiving.
This picture has become a symbol of Thanksgiving and was printed in Life
magazine

Governor William Bradford famously sent 'four men fowling'. They returned with deer, wild ducks
and geese. While they probably did not have turkey as we know it, the Pilgrims coined the word 'turkey'
as a generic term for any wild fowl. The resulting feast was more like an English harvest festival than a
true Thanksgiving observance.

Why the Pilgrim's pants always falling down?
Because they wore
their buckles in their hats.

What happed to the Pilgrim who was shot at by an Indian?
He had
an arrow miss.

'Nathaniel you know an ancestor of mine came over on the
Mayflower.'
Nathaniel replied: 'Really? Which rat was he?'

Why did the hungry Pilgrim eat the last candle
He wanted a
light snack.

'I was going to serve sweet potatoes with Thanksgiving dinner,
but I sat on them.'
'So what are you serving now?'
'Squash.'

Now where is that Turkey?

One hunter has two blunderbusses.

The second pilgrim asks, 'Why do you have two blunderbusses?'

The first pilgrim explains, 'I usually miss the first time I shoot. By
taking two I can shoot again.'

The second pilgrim thinks for a while and then says, 'Why not just take
the second one, and only shoot once?'