This photo is absolutely beautiful, be sure to read the text below to have a better understanding of what you are viewing.   The image is historic too as this is the last mission for Columbia. The photograph attached was taken by the crew on board the Columbia during its last mission, on a cloudless day. 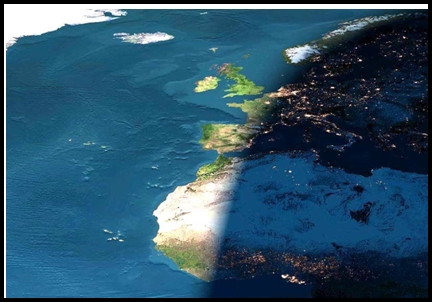 The picture is of Europe and Africa when the sun is setting. Half of the picture is in night. The bright dots you see are the cities lights. The top part of Africa is the Sahara Desert. Note that the lights are already on in Holland, Paris, and Barcelona, and that's it's still daylight in Dublin, London, Lisbon, and Madrid. The sun is still shining on the Strait of Gibraltar. The Mediterranean Sea is already in darkness. In the middle of the Atlantic Ocean you can see the Azores Islands; below them to the right are the Madeira Islands; a bit below are the Canary Islands; and further south, close to the farthest western point of Africa, are the Cape Verde Islands. Note that the Sahara is huge and can be seen clearly both during Daytime and night time. To the left, on top, is Greenland, totally frozen.

The Truth: A photograph of a Model - kindly supplied by Chris Hills

There are six clues that it was not taken from Space Shuttle Columbia during its last mission:

1. It's taken from much too high up, the shuttle never leaves low earth orbit.

2. The night-time area should be black.

3. The terminator is too sharp.

4. Details of the sea floor are visible.

5. There are no clouds. 'A cloudless day' is a local phenomenon and could not possibly cover the whole of Europe and the North Atlantic.

6. In January/February the North Pole should not be sunlit.

7. Conclusion: It's clearly a picture of a model.

Spectacular pictures, evocative images, amusing photos.  Find a picture which will make you think.  Will and Guy hope that you enjoy our selection of amazing pictures.