Keep In Touch with a Mobile Phone

Frank wants to get his beautiful wife, Betty, something nice for their first
wedding anniversary.  So he decides to buy her a mobile telephone.  Betty is excited, she loves her phone.  Frank shows her and explains to her all the different and varied features on the phone.

On Monday Betty goes shopping in the local supermarket. Her phone rings and it's
her husband, 'Hi ya, Betty,' he says, 'how do you like your new phone?'
Betty replies, 'I just love it, it's
so small and light and your
voice is clear as a bell, but there's
one feature that I really don't
understand though.'

'What's that, Betty?' asks the husband.

'How did you know that I was at Tesco?'

Funny Story About
a Mobile Phone

Fred rushes in and announces loudly, 'I tell you, women drivers are a
hazard to traffic.  Driving to work this morning on the freeway, I looked
over to my left and there was this woman in a Jaguar doing at least 70 mph with
her face up next to her rear view mirror putting on her mascara.

I looked away for a couple seconds and then the next thing I knew was she
was careering all over my lane.

It scared me so badly that I dropped my
electric shaver into my coffee, and it spilled all over my mobile phone.' 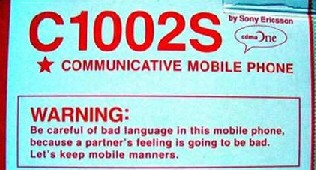 Perhaps this should be the saga of the immobile phone!

Having just moved into his new office in Whitehall, pompous, newly promoted Lieutenant Commander Rodney Grant [Royal Navy] was sitting at his desk when Leading Seaman Jones knocked on his door.  Particularly
aware of his new position, the commander quickly picked up the phone, told the seaman to enter, then said into the phone, 'Yes, Admiral, I'll be seeing him this afternoon and I'll pass along your message.  In
the meantime, thank you for your good wishes, sir.'

Feeling as though he had sufficiently impressed young Jones man, he asked, 'What do you want?'

'Nothing important, sir,' Jones replied without batting
an eyelid, 'I'm just here to connect up your new telephone.'

Clara works in the customer service call centre of a national pager company. There, she deals with the usual complaints regarding poor pager operation, as well as the occasional loony caller demanding to be
paged less often, more often, or by more interesting people.

A good call came from Arthur, who repeatedly complains that he keeps being paged by 'Lucille.'

Arthur was told that he would have to call
her and tell her to stop paging him.

'She don't never leave no number, so I can't call her back,' Arthur grizzled, unhappily.

After three such calls, someone thought to ask how he knew it was
Lucille if she didn't leave a number.

'She leaves her name,' was Arthur's triumphant reply.

After establishing that the customer had a numeric-only pager, the light bulb came on.

'How
does she spell her name? Clara politely enquired.

Yet another technical problem solved!

Apparently this call centre story is based on a true story: - Would you
believe it!