Blackberry Day has now been accepted as the 12th September.  This for
the logical reason that this is
statistically the date when blackberries reach their peak in the English
Midlands.

Not a vintage year.  Insufficient sunshine, too much rain.

This year's crop seems late.  We just haven't had the sunshine this
summer to produce a bumper crop.  Furthermore every time I think about
going out blackberrying, it rains!

One piece of good news; a neighbour and her two young daughters went out
picking and kindly gave us enough blackberries for my wife to make a
tasty blackberry tart.

I don't know if it was just me, but I missed out on the 2010 blackberry
season.  It always seemed to rain just as I was about to pick.
Blackberries will recover from a shower, and the later fruiting berries in
the bunch will ripen when the sun returns.  However, I always seemed to
be in the wrong place at the wrong time.

In the Midlands of England, where I live, it was a pretty average
blackberry season in terms of rainfall and sunshine.  However, there
was a hiccup in early September when we caught the tail of Hurricane Danny,
but after a week or two of better weather the blackberries miraculously
appeared in time for Blackberry Day 12th September.

Unlike other seasonal event such as Halloween, or Groundhog Day,
Blackberry Day varies from year to year.  It is simply the day when
blackberries are at their best for that particular year.  In the
summer of 2008 there was less sunshine and more rain than average,
thus 'Blackberry Day' was less productive than usual.

To tell the truth, by the end of August 2008 I thought that blackberry
season may be literally a wash-out, however mother nature has seen fit to
nourish the blackberries and by mid-September they will be big, black and
succulent.  The persistent rain means that some bushes have watery
fruit, but if the fruits have a glossy finish then there is hope that they
will taste sweet and intensely blackberry.

Choose a container to match your expectations.  A two litre ice
cream box is a good starting point.  If you are going to drive
around looking for blackberries, then you need a container with a lid,
otherwise Murphy's law will kick in, and as you round the last corner
all the blackberries will spill into the car's foot-well.

One of the
surprises of picking blackberries (Rubus fruticosus) is how much the taste varies from one
bush to the next.  In general, avoid even black blackberries if
they look shrivelled.  Seek out heads where the individual seeds
look full to bursting.  Any fruit that says to you 'I am a seed' is
going taste tough fibrous and generally - seedy.

Don't be tempted to
pick blackberries with any green bits, you will only discard such fruit
later, so don't pick them in the first place.  Favour a clean pick,
with no stalks or other inedible bits.  While the end product is
worthwhile, and being in the countryside has its attractions,
nevertheless, picking can be boring so set yourself targets. For
example, I say to myself,  'I am going to pick 100 berries before I
taste one'.  Better still, 'I am going to pick 500 berries, that
will be enough for a blackberry tart. 1, 2, 3,.....'

Granny says: 'All children love the adventure of blackberry picking'.
O.K. they eat some, but they have sharp eyes, and can spot those
blackberries which are low down and easily missed by adults'.
These days more than ever it's good to make sure that children make the
connection between nature in the raw and food on the table.
Adventurous children may even stray into the fields and find other
delights such as mushrooms, whose season overlaps with the blackberry.

Cultivated blackberries are bigger and shiner, but when it comes to
flavour they are 'weak tea'.  Take the trouble to pick your
own, the wild hedge-row blackberry are the real deal; cultivate
blackberries always flatter only to disappoint.  So if you see bush
with huge blackberries and no thorns, this is fools gold, they will
taste only of water.

It's hard to beat a handful of wild, raw, uncooked blackberries,
maybe it's the fresh taste, maybe its the moment, but picking
blackberries off the bush takes some beating.  Two 'dishes' that
come close are blackberry & apple pie, or blackberry fool.  By
'fool' I mean blackberry mixed with yogurt.  Although the women in
my life say that cream is even better than natural yogurt.

Blackberries also freeze better than other soft fruits, so if you have a
glut and there is room in the freezer, then build up a supply for later
in the year.

O, blackberry tart, with berries as big as your thumb, purple and black,
and thick with juice, and a crust to endear them that will go to cream
in your mouth, and both passing down with such a taste that will make
you close your eyes and wish you might live forever in the wideness of
that rich moment.

From 'How Green Was My Valley by Richard Llewellyn' 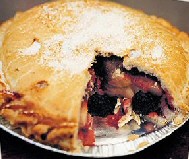 Ingredients For the short-crust pastry:

We eat blackberries because we love the flavour, however, they are
packed with useful nutrients such as vitamin C.  Another bonus is
blackberries contain antioxidants, and a pleasant surprise they also
contain a natural aspirin.  For those who are looking for ellagic
acid, this is a good alternative source to raspberries.

The Michaelmas custom dictates that you should not eat blackberries after the 29th of September.
There is a very good reason for this custom, namely that by this time of
year blackberries are tasteless and watery. 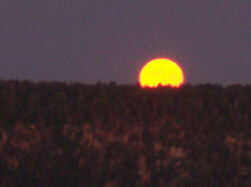 The full moon nearest to the autumnal equinox has
magical properties, and is known as the harvest or hunter's moon.

The
essential point, about the full moon is that it rises shortly after sunset.
At the autumn equinox this interval maybe as little as 30 minutes.  The
point is that a harvest full moon artificially extends the evening light, which is useful
to both hunters and natural wildlife predators.

After the harvest moon come the so called poachers, typically, this is the full moon at the end of October or early November.

What do you get when a you eat a 'BlackBerry'?
A Bluetooth?

Why were all the little blackberries crying?
Because their parents
were in a jam.

Overheard from Dina our four-year old niece, 'Mummy, why do my toes get
sticky when I eat blackberry jam?'
Mummy, 'Hmm... perhaps you need a
smaller spoon'.