I was flying from Shanghai to Zhengzhou. By the time we took off, there had been a 45-minute delay and everybody on board was slightly annoyed.  Unexpectedly, we stopped at Nanjing on the way. The
flight attendant explained that there would be another 45-minute delay, and if we wanted to get off the aircraft, we could re-board in thirty minutes. 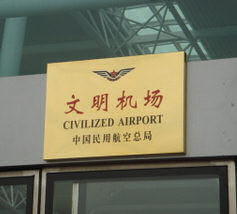 Everybody got off the plane except one gentleman who was blind. I noticed him as I walked by and could tell he had flown
before because his guide dog lay quietly underneath the seats in front of him throughout the entire flight. I could also tell he had flown this very flight before because the pilot approached him and, calling
him by name, said, 'Lee, we're in Nanjing for almost an hour. Would you like to get off and stretch your legs?'

Lee replied, 'No thanks, but maybe my dog would like to stretch his legs. Would you take
him for me please?'

Now picture this. All the people in the gate area came to a completely quiet standstill when they looked up and saw the pilot walk off the plane with a guide dog! The pilot was even
wearing sunglasses that day. People scattered not only trying to change planes but also trying to change airlines!

Flying in the 'Old Days' 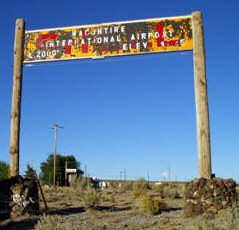 In the early 1930's, a farmer and his wife went to a fair. The farmer was fascinated by the airplanes and asked a pilot how much a ride would cost.

The pilot thought for a second and then said, 'I'll make you a deal. If you and your wife ride for 3 minutes without uttering a sound, the ride will be free. But if you make a sound,
you'll have to pay $10.'

The farmer and his wife agreed and went for a wild ride. After they landed, the pilot said to the farmer, 'I want to congratulate you for not making a sound. You are a brave man.'

'Maybe so,' said the farmer, 'But I gotta tell ya, I almost screamed when my wife fell out.'

A Classic Piece of Navigation

There was a pilot flying a small single engine charter plane, with a couple of very important executives
on board. He was coming into Seattle airport through thick fog with less than 10m visibility when his instruments went out. So he began circling around looking for landmark. After an hour or so, he starts
running pretty low on fuel and the passengers are getting very nervous.

Finally, a small opening in the fog appears and he sees a tall building with one guy working alone on the fifth floor. The pilot banks
the plane around, rolls down the window and shouts to the guy, 'Hey! Where am I?' To this, the solitary office worker replies, 'You're in a plane.'

The pilot rolls up the window, executes a 275 degree turn
and proceeds to execute a perfect blind landing on the runway of the airport 5 miles away. Just as the plane stops, so does the engine as the fuel has run out.

The passengers are amazed and one asks how he
did it. 'Simple,' replies the pilot, 'I asked the guy in that building a simple question. The answer he gave me was 100 per cent correct but absolutely useless, therefore that must be Microsoft's support office
and from there I knew the airport was just 5 miles away.' 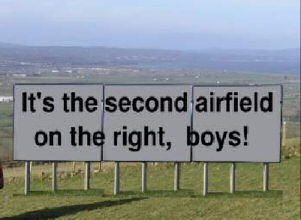 A gigantic new sign placed just under the flight path of most aircraft approaching the City of Derry Airport, Northern Ireland. It was felt, by the local council, that the aircrews needed all the help they
could get.

One reason why pilots may need more ground navigation aids:

According to The Australian newspaper, an airliner recently encountered severe vibration in
flight. The captain decided to make an emergency landing, and switched on the seat belt sign. The vibration stopped immediately.  A passenger emerged from a lavatory and explained that he had been
jogging inside the smallest room.

The Priest and the Pilot

A priest dies and is waiting at the Pearly Gates of heaven. Ahead of him
is a guy who's dressed in sunglasses, a loud shirt, leather jacket, and
jeans.

Saint Peter addresses this cool guy, 'Who are you, so that I may know
whether or not to admit you to the Kingdom of Heaven?'

Saint Peter consults his list. He smiles and says to the pilot, 'Take
this silken robe and golden staff and enter the Kingdom.' So Captain Mike
goes into Heaven with his robe and staff.

Next, it's the priest's turn. He stands to his full height and booms out,
'I am Father David, pastor of Saint Mary's church for the last 51 years.'

Saint Peter consults his list. He says to the priest,  'Take this
cotton robe and wooden staff and enter the Kingdom.

'Just a minute,' says the good father. 'That man was a pilot and he gets
a silken robe and golden staff and I get only cotton and wood. How can this
be?

'Up here - we go by results,' says Saint Peter.
'When you preached -
people slept. When the pilot flew, people prayed...'

This Pilot Story May, or May Not Be True - What
Do You Think?

The photographer for a national magazine was assigned to get photos of a great forest fire.  Smoke
at the scene was too thick to get any good shots, so he frantically called his home office to hire a plane.

'It will be waiting for you at the airport!' he was assured by his editor.
As soon as he got to
the small, rural airport, sure enough, a plane was warming up near the runway. He jumped in with his equipment and yelled, 'Let's go! Let's go!' The pilot swung the plane into the wind and soon they were in the
air.

'Fly over the north side of the fire,' said the photographer, 'and make three or four low level passes.'
'Why?' asked the pilot.

After a long pause the pilot said, 'You mean you're not my flying instructor.'

Will and Guy Relax After a Day of Computing

P.S. Please write to Will and Guy if you have a funny pilot joke.