Andy told me he knew a man with a wooden leg named Smith. So I asked him, "What was the name of his other leg?"

Mrs Cameron, a primary teacher, was teaching her class about the difference between right and wrong. "All right children, let's take an example," Mrs Cameron said. "If I were to get into a man's pocket and take his wallet with all his money, what would I be?" Little Tony raises his hand, and with a confident smile says, "You'd be his wife."

CONCLUSION: Eat and drink what you like. Speaking English is apparently what kills you. See more on quirky English humour

See more Only in... English jokes

A Funny British Pub Name:  The Quiet Woman A Splendid Example of an Oxymoron? 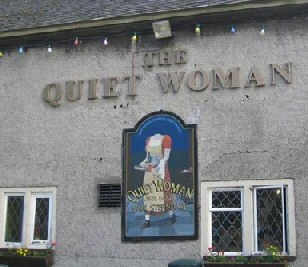 Could this village be twinned with Headless Cross, in Worcestershire, England?

Last year I replaced all the windows in my house with that expensive casement type with shutters.  Today, I got a call from the contractor who installed them. He was complaining that the work had been completed a whole year ago and I still hadn't paid for them.

Hellloo............ Just because I have fair hair doesn't mean that I am automatically stupid. So, I told him just what his fast talking sales guy had told me last year, that in ONE YEAR these windows would pay for themselves! Hellloo? It's been a year! I told him. There was only silence at the other end of the line, so I finally just hung up. He never called back. I bet he felt like an idiot.
Teacher: Paul. Give me a sentence beginning with "I". Paul: I is the... Teacher: No, Paul . You must say "I am" not "I is." John: All right.  I am the ninth letter of the alphabet.

Roland, an Englishman went to Spain on a fishing trip. While there, Roland hired a Spanish guide to help him find the best fishing spots. Since Roland was learning Spanish, he asked the guide to speak to him in Spanish and to correct any mistakes of usage. Together they were hiking on a mountain trail when a very large, purple and blue fly crossed their path. The Englishmen pointed at the insect with his fishing rod, and announced, 'Mira el mosca.' The guide, sensing a teaching opportunity to teach Roland, replied, 'No, senor, "la mosca"... es feminina.' Roland looked at him in amazement, then back at the fly, and then said, 'Good heavens..... you must have incredibly good eyesight.'

Two old men, Dick and Norton were sitting next to each other on the London subway [tube]. Their hearing isn't good. Dick mutters, 'Is this Wembley?' 'No,' says Norton, 'It's Thursday.' Dick answers, 'OK then, let's find a pub and have a drink.'

What did Anne Boleyn's mother say when her daughter said that she had fallen in love with Henry the VIII and was going to marry him? That man's not worth losing your head over.

Laugh Along At The British

Locked Car - Frozen Brain When my husband and I arrived at our local Ford dealer to pick up our car, we were told the keys had been locked in it.  We went to the service department and found a mechanic working feverishly to unlock the driver's side door.  As I watched from the passenger side, I instinctively tried the door handle and discovered that it was unlocked. 'Hey,' I announced to the Mechanic, 'It's open.' His reply, 'I know. I already did that side.' This was at the Ford dealership in St Albans, Hertfordshire UK. She Doesn't Gets a Buzz The stoplight on the corner buzzes when it's safe to cross the street. I was crossing with an intellectually challenged co-worker of mine.  She asked if I knew what the buzzer was for.  I explained that it signals blind people when the light is red. Appalled, she responded, 'What on earth are blind people doing driving?' She is a Local County Employee in Harrow, Middlesex , UK Dear Deer I live in a semi rural area.  We recently had a new neighbour call the Highways Department to request the removal of the DEER CROSSING sign on our road.  The reason: "Too many deer are being hit by cars out here.  I don't think this is a good place for them to be crossing anymore." Story from Potters Bar, Herts, UK Footnote: Please send us your short English jokes