Will and Guy have collected the finest examples of Irish humour.

The Funny Tale of O'Malley and the Scuba Diver

Even though O'Malley was a licensed scuba diver, he finally got an answer to a question that had annoyed him for decades. Here it is. Harold, an American tourist, asked his friend Murphy, 'Why do Scuba divers always fall backwards off their boats?' To which Murphy replies, 'If they fell forwards they'd still be in the flippin' boat.'
Funny Announcement from Dublin Due to a water shortage in Ireland, Dublin swimming baths are planning to close lanes 5 and 6.

Mick and Paddy were walking in Covent Garden in London. It was their first week in the capital and they were a bit naïve. 'Lord above Paddy, this is a great city,' says Mick. 'Why's that Mick?' responds Paddy. 'Well, to be sure,' explains Mick, 'where else in the world would a complete stranger come up to you, make idle chat, invite you to dinner and then offer you to spend the night at their house?' 'Begorrah, ' splutters Paddy, 'did that happen to you?' 'No,' says Mick, 'but it happens to my beautiful sister all the time.'

O'Connor and the Fierce Dog

O'Connor was sitting in Ward's Irish bar, Piccadilly, London with a large Rottweiler at his feet. 'Does your dog bite?' asks Murphy. 'No,' replies O'Connor. So Murphy pats the dog who almost rips his arm off completely. 'Hey!' screams Murphy, 'you said your dog didn't bite, O'Connor.' 'That's not my dog Murphy,' concludes O'Connor.

Michael O'Leary was waiting at the bus stop with his friend, Paddy Maguire, when a lorry went by loaded up with rolls of turf. 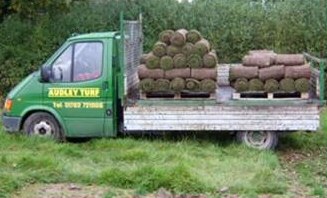 O'Leary opined, 'I'm gonna do that when I win de lottery, Maguire.' 'What's that, Michael?' responds his mate. 'Send me lawn away to be cut,' concludes O'Leary.

Which of These Pair Do You Think Is the Funnier Irish Joke?

A Waterford wife, Pauline, was keeping a close eye on her new neighbours. 'They seem perfectly devoted to each other,' she opined to husband, Ryan. 'He kisses her every time he goes out and even blows kisses to her from the window. Why don't you do that?' 'But, I hardly know the woman,' was Ryan's reply.

The Irish in Space

Donncha and MacArthur are preparing to be blasted into space and have just left the mission briefing when one turns to the other and says, 'Mac, where are we goin?' MacArthur replies, 'Well Donncha, the man in charge said we are on a mission to the sun.' 'OK,' says Donncha, he thinks for a while and then asks, 'Won't it be a bit hot, it being the sun and all?' 'Don't be stupid, Donncha,' says MacArthur, 'the man said we'd be going at night.'

Two Irish mothers, Kate and Lorna were talking about their sons. Kate says, 'My Patrick is such a saint. He works hard, doesn't smoke, and he hasn't so much as looked at a woman in over two years.' Lorna responds, 'Well, my Francis is a saint himself. Not only hasn't he not looked at a woman in over three years, but he hasn't touched a drop of liquor in all that time.' 'My word,' says Kate, 'You must be so proud.' 'I am,' announces Lorna, 'And when he's paroled next month, I'm going to throw him a big party.'

The Irishman and The Ventriloquist

A ventriloquist is telling Irish jokes in Davy Byrne's pub in Grafton Street, Dublin, when, O'Leary, an irate Irishman stands up shouting, 'You're making out we're all dumb and stupid. I oughtta punch you in the nose.' 'I'm sorry sir, I...........' 'Not you,' says O'Leary, 'I'm talking to that little fella on your knee.' 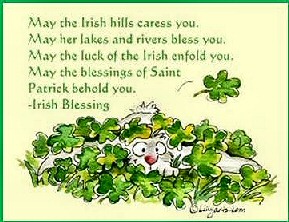 Tis A Funny Irish Story - So It Is

Sean Muldoon loved his dog, Willy, and he walked the dog constantly through town. When Muldoon and Willy would go on their walks, they would stop to talk to just about everyone they met along the way. Naturally, everyone in town eventually knew both Muldoon and Willy. This went on for years. One sad day Old Sean Muldoon went on his usual walk, but this time he walked all alone without Willy. Patrick O'Halloran was the first to spy Old Sean without his faithful companion. 'Where's Willy?' asked O'Halloran. 'Tis a sad day 'tis, Patrick,' replied Muldoon. 'I had to put poor ol' Willy down, I did. I loved that dog dearly.' 'Oh no,' cried O'Halloran, 'Did he go rabid? Was he mad?' 'Well, he was none too pleased,' replied Muldoon.
Snakes in Ireland When the Irish say that St. Patrick chased the snakes out of Ireland, what they don't tell you is that he was the only one who saw any snakes.

Of all countries, Ireland probably has the richest seam of story tellers, here are some good examples of their tall stories.

I first met O'Reilly when I was in St Peter's Hospital, Chertsey, England. He was in the same ward as me and was lying, quite still, in the bed next to me when I awoke early on that Friday morning. I was taken aback because he was swathed in bandages from head to toe, with just two little slits for his eyes and this made it difficult to engage him in conversation. However, later that same day, his best friend, Dermot Callaghan, came in to visit O'Reilly and I listened in to their conversation which went as follows: 'What happened to you?' asked Callaghan. 'I staggered out of The Invincible pub, in Shepperton Road, and a lorry hit me a glancing blow and knocked me through the Co-op's plate glass window,' mumbled O'Reilly.' 'Begorrah,' exclaimed Callaghan in his broad Munster accent, 'It's a good job you were wearing all those bandages or you'd have been cut to ribbons!'

The Fame of Red Adair (Overheard by Denis)

At the height of the gulf wars, the expertise of Red Adair (that well known fire fighter) was called upon to go out to the gulf and put out the oil rig fires. On his way his plane landed in Ireland for an overnight stop so Red took advantage to visit the local bar for a pint of the black stuff. On entering the bar two old Irish boys witnessed him walk in and one said to the other. 'Isn't that Red Adair'?  The other replied, 'No'. The old boy then said, 'I'm sure it is and I'm so sure that I will bet you a pint if I am wrong'. The doubting one said, 'Ok' and they both went over to Red and the one said, 'Are you Red Adair'?  To which Red said he was. The doubting Irishman said, 'Are you still dancing with Ginger Rogers'?

Mick, from Dublin , appeared on 'Who Wants To Be A Millionaire' and towards the end of the program had already won 500,000 euros. "You've done very well so far," said Chris Tarrant, the show's presenter, "but for a million euros you've only got one life-line left, phone a friend. Everything is riding on this question. Will you go for it?" "Sure," said Mick. "I'll have a go!" "Which of the following birds does NOT build its own nest? "I haven't got a clue," said Mick, ''so I'll use my last lifeline and phone my friend Paddy back home in Dublin ." Mick called up his mate, and told him the circumstances and repeated the question to him. "Hell, Mick!" cried Paddy. "Dat's simple. It's a cuckoo." "Are you sure?" "Of course I'm sure." Mick hung up the phone and told Chris, "I'll go with cuckoo as my answer." "Is that your final answer?" asked Chris. "Dat it is." There was a long, long pause and then the presenter screamed, "Cuckoo is the correct answer! Mick, you've won 1 million euros!" The next night, Mick invited Paddy to their local pub to buy him a drink. "Tell me, Paddy? How in Heaven's name did you know it was da Cuckoo that doesn't build its own nest?" "Because everyone knows he lives in a clock!" [Funny how one funny Irish strory reminds you of another]

Paddy, Deion and Bruce were three passengers in a light plane.  The aircraft got into difficulties and they needed to bale out, unfortunately there were only parachutes. The first, Paddy, was the Irish Mastermind Champion. The second, Deion, was an American Hall of Footballer. The third, Bruce, was an Australian dual Olympic Games Champion. The conversation went thus, Paddy said, 'There have been many American Hall of fame footballers and several people have won Olympic Gold medals, but there has only ever been one Irish Mastermind Champion. So I'll take the first parachute and you two can fight it out for the last one'. With that Paddy took a parachute and leapt out of the plane, which incidentally, by now was in considerable distress. 'How shall we decide who has the last parachute?', Deion asked Bruce.' No worries', Bruce said, 'Yonder Irish Mastermind Champion has jumped out with my rucksack'.

When my older brother, Shay, was very young, he always walked up to the church altar with my mother when she took communion. On one occasion, he tugged at her arm and asked, 'What does the priest say when he gives you the bread?'  Mum whispered something in Shay's ear. Imagine his shock many years later when he learned that the priest doesn't say, 'Be quiet until you get back to your seat.'

Addendum This yarn sums up Irish humour: irreligious without being offensive. The Irish have a gift form making an illogical argument funny. 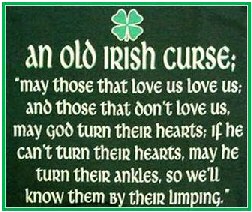 I Dream of Erin Isle

Whenever I dream, It seems I dream Of Erin's rolling hills Of all its lovely, shimmery lakes And little babbling rills. I hear a colleen's lilting laugh Across a meadow fair. And in my dreams It almost seems To me that I am there O, Ireland! O, Ireland! We're Never far apart For you and all your beauty Fill my mind and touch my heart.
Footnote: Please send us your funniest Irish joke or short story.