Will and Guy would recommend that you join in the fun on that day and act rather like that marvellous actor, the late and great Robert Newton, from the 1950 Disney film 'Treasure
Island.'

The next International
'Talk Like A Pirate Day' will be on
Sunday 19th September 2010.

September
the 19th - it be International Talk Like A Pirate Day. Ye don't want to be forgettin' that and have yer kids goin' to school soundin' like a bunch o' landlubbers, now do ye? Arrr.

Talk
Like a Pirate Day is also a chance to raise money for charity.

The British HQ of 'Talk Like a Pirate Day' gives all its collected money to
Marie Curie Cancer Care.

You may like to consider some of the
following behaviour as a start:

It all started back in the 1990s as a cult joke between two American friends: John 'Ol Chumbucket' Baur and Mark 'Cap'n Slappy' Summers but
really took off when columnist Dave Barry got to hear about their surreal festival and publicised it.

International Talk Like a Pirate Day (TLAPD), which adopted Treasure Island star Robert Newton as its
patron saint, now attracts fans from as far afield as Britain and Australia and even boasts a special Wikipedia site on the Internet.

The day even has its own unofficial anthem: American Tom Smith has
written and recorded 'Talk Like a Pirate Day' - and Canadian sketch comedy troupe Loading Ready Run produced an educational video on how to swashbuckle with the best of them.

Will and Guy have
researched some vocabulary that you may enjoy using in your conversations:

How to be a
Pirate Girl:

Wear a lot of bandanas. Especially ones with skull and crossbones designs and red and
black ones. When not wearing a bandana, make your hair a bit messy. You can also use an eye patch. White, ivory, beige, cream and tan peasant shirts are great for the look. Skull t-shirts are also great. Plain
black, white or beige shirts with cut-off sleeves are a great addition to your wardrobe. Brightly coloured long sleeve button ups are piratey. Just make sure they are loose, not stiff like a shirt a corporate
executive might wear to the office. And make sure you leave all of it untucked but the very front, creating a sagging look [regardless of how it's finished] and unbutton the top few buttons suggests the
Telegraph online.

A Dog Likes Being a Pirate
for the Day

Jokes for International Talk Like a Pirate Day (TLAPD) 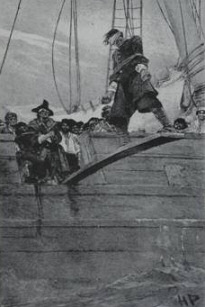 Hollywood, Robert Louis Stevenson's 'Treasure Island' and the story of Peter Pan,
are responsible for perpetuating the myth that pirates used to
kill their enemies by making them 'walk the plank.'

The fact, it is hard to imagine that real pirates such as Captain Kidd would waste time killing someone by drowning in this fashion. A quick throw
overboard would suffice.  If a buccaneer
wished to be cruel, or wanted to torture their victim, then  Keel-hauling would be more effective.

Another reason why 'walking
the plank' is lionised is because of Howard Pyle's illustrations in the 19th Century. The picture (see right) first appeared in Harper's Monthly in 1887. 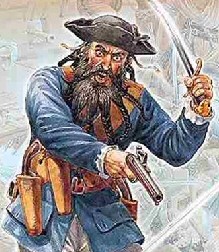 Three of us afloat in the meadow by the swing,
Three of us abroad in
the basket on the lea.
Winds are in the air, they are blowing in the
spring,
And waves are on the meadow like the waves there are at sea.

Where shall we adventure, to-day that we're afloat,
Wary of the weather
and steering by a star?
Shall it be to Africa, a-steering of the boat,

To Providence, or Babylon or off to Malabar?

Hi! but here's a
squadron a-rowing on the sea-
Cattle on the meadow a-charging with a
roar!
Quick, and we'll escape them, they're as mad as they can be,
The wicket is the harbour and the garden is the shore.

Fascinating Pirate Facts from Will and Guy

Did You Know?  Four Different Types of Pirate:

1) Buccaneers
Buccaneers were rovers who plied their sweet trade in the
Caribbean. The original name is Boucanier; meaning someone who barbecues
meat. The original buccaneers were hard, strong men who were involved in the
wood trade. When economic times were tough, they resorted to piracy to make
ends meet.

2) Corsairs
Corsairs was the name given to pirates who plied their sweet
trade off the coast of North Africa. The Barbary Corsairs were such a band
of pirates who sailed off the Barbary Coast.

The Barbary states were
semi-autonomous Muslim cities along the coast from which the pirates hailed.
Their chief claim to fame is the cruel manner in which they treated
Christian captives, who were chained to the benches of Corsair galleys and
made to row nonstop for hours on end. If the rower quit, he was mercilessly
whipped to death and tossed to the waves.

Corsair forts were known to be
places where prisoners were maltreated in a great variety of ways; including
being tossed onto hooks which were imbedded in the outer wall of the fort's
gate and left to rot in the hot sun. 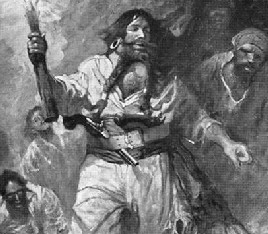 3) Pirates
Pirates are people who rob and plunder at sea; the sea worthy
equivalent of highwaymen. Kings and Queens did both through their
surrogates; privateers and tax collectors.

4) Privateers
Privateers were often private boat owners who operated
under a 'Letter of Marque' from their government, which allowed them to
plunder the ships of "enemy" countries.

Privateers also used their
vessels to help protect their country in the event of war. As Samuel
Johnson's dictionary definitions make clear, in the eighteenth century 'the
difference between a pirate and a privateer was as thin as the piece of
paper bearing a royal letter of marque.'

A Good introduction to the pirate culture can be found
here:

Captain Morgan, typifies the buccaneer spirit.  He also typified how both the establishment and history blurred line between good and bad.  If you were English and you robbed ships belonging
to enemy countries such as Spain, then you were a good privateer.  But if you looted English or allied ships, then you were bad pirate.  In 1673 Captain Morgan stood trial for piracy, however instead
of being convicted, the King (Charles II) intervened personally, knighted Captain Morgan, and then made him governor of Jamaica.

Blackbeard, terrorised the American
coasts in the early 18th centaury.  Killed in 1718 by Lieutenant Maynard of the Royal Navy (Pre-independence).

A Hampshire woman has been ordered to remove a pirate flag from her garden.

She wanted to fly the Jolly Roger in her garden for a bit of fun writes the
Basingstoke Gazette; but Carol Clark's plan to run the flag up the pole has been
shot down in flames. Mrs Clark, 47, from The Rookery, Whitchurch, Hampshire, UK,
received a letter from the Basingstoke and Deane Borough Council after someone
complained about the flag being flown.

An inspection by a council official followed and Mrs Clark was then told
flying the pirates' emblem contravened advertising regulations and that she
would have to apply for planning consent, at a cost of £265, [$516 USD] or risk
legal action. Recognised national, regional or local flags may be flown without
consent, but all others are treated as advertisements and require planning
permission.

Carol Clark has now decided to replace the Jolly Roger with a Union Flag,
which does not require consent to be flown.