Will and Guy present their collection of true stories about Olympic marathon races.
There seems to be something about an Olympic Marathon, that encourages
drama and controversy.

In 1896 the Spiridon Louis won the first Olympic Marathon in
2hrs:58:50, and the course was only 40K and not yet been standardised at 42.195K or 26 miles and
385 yds.  Naturally, the race started in the city of Marathon and
when Louis enjoyed entered the
stadium in Athens 6 minutes clear of the rest he had a fantastic
reception.  Indeed, he was joined by the Crown Prince
Nicholas who ran with him to the finish line, and then
carried him in triumph to the royal box.

One has to feel sorry for Carlo Airoldi of Italy who had walked
nearly a thousand miles from his home in Italy to Athens, only to be
prevented from racing by Pierre Coubertin on the grounds that he was a
professional athlete.

In the event only 17 runners started in that first Olympic marathon.
Hungarian Kellner originally finished fourth and complained that the
Greek Belokas, who finished in front of him, had covered part of the
course in a carriage.  To his credit Belokas admitted his guilt and
Kellner was duly awarded third place.  This would not be the last
time that the Olympic marathon would finish in controversy.

There have been persistent rumours that the marathon winner, Michel
Théato took a short-cut through the Paris backstreets.  Claims that
he was a baker's boy seem wide of the mark as he was a carpenter.
The Olympic historians André Drevin and Raymond Pointu exonerate Théato,
but nobody can be really sure at this distance what actually happened.

Another point of interest in the Michel Théato saga is that he was a
Luxembourg national, a fact that was not registered at the time.
It emphasises how disorganized the Olympic organization was in those
days.

The marathon at the St Louis 1904 Olympic Games was held in 90 degree
heat with a single water well at the 12-mile mark, consequently only 14
of 32 participants finished the marathon.  Lorz hitched a
lift in his manager's car for about 10 miles.  Unsurprisingly for
those days the care broke down so a refreshed Lorz carried on jogging.
Eventually he reached the stadium, still well in front of the other
competitors and was hailed as the winner.

Though he initially went along with it, Lorz soon admitted the
deception.
Actually, Lorz was not a bad runner because he won the Boston Marathon
in 1905 with a time of 2:38:25.

Thomas Hicks was judged the real winner of the 1904
Olympic Marathon, however, his supporters gave him strychnine and
brandy; the first known use of performance-enhancing drugs in the modern
Olympics.

Cuban marathon runner, Felix Carvajal, who lost his money in a
"craps" game in New Orleans, hitchhiked to St. Louis and ran the race in
street shoes.  He stopped to chat with spectators and to steal
apples from an orchard but still finished fourth.

Controversy in the 1908 London Marathon 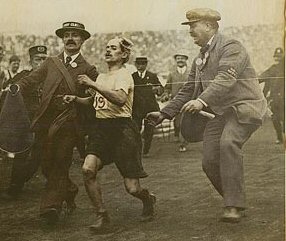 The classic marathon distance of 26 miles and 365 yards was fixed once and
for all in the London Marathon.  The peculiar distance came about when the
course from Windsor Great Park to Shepherds Bush was extended by a mile and 365
yards so that it finished at the Royal Box.

The London marathon staged the most controversial happening in all Olympic
Marathons.  The race had been uneventful until Dorando
Pietri of Italy staggered into the stadium, and then collapsed.  Perhaps
you have seen the grainy film of him being
half-carried across the finish line.  Some say Sir Arthur Conan Doyle was
of those who helped the stricken runner.

What could the officials do?  After all, it was they who had helped Pietri.
Eventually, after protests from the Americans, Pietri was disqualified and John
"Johnny" Hayes was declared the winner.
However, Queen Alexandra upholding the British sense of fair play, awarded Pietri
a special gold-plated cup.

Another interesting Olympic marathon was the event in London in 1948.  Even though he only finished third, the hero of the marathon was Etienne Gailly.   Although he had never run a marathon before, he was up
with the leaders throughout.  He entered Wembley stadium first, shortly
ahead of Argentina's Delfo Cabrera and Britain's Thomas Richards.
Gailly had barely a lap of the track to complete, but the crowd could see
his legs wobbling and his path wavering to and fro.  Groans rang out
around the stadium as he dried up to a walk and was overtaken by Cabrera and
Richards.

They say that history never repeats, but in a shocking reminiscence of
Pietro Dorado collapsing within
view of the tape in the London marathon 40 years earlier, Gailly fell to his
knees on the home straight. But, to a standing ovation, he straightened up
and staggered over the finishing line for a bronze.

Abebe Bikila, from Ethiopia, was the Olympic marathon champion in
both Rome 1960 and Tokyo 1964.  Abebe was the first black African
in history to win a gold medal in the Olympics.  After winning
bear-foot, and in World record time, he said: "I wanted the world to know that my country,
Ethiopia, has always won with determination and heroism."  Incidentally there is a stadium in Addis Ababa is named in Bikila's
honour.

The Most Famous Long Distance Race - The Marathon

U.K. Teenagers of the 1970's
thought Marathon was a chocolate bar!
Naturally you know it was the the Greek city where the Phedippedes finished his
epic run.

The Marathon race legend tells us that Phedippedes ran from Marathon on one
coast, over the hills to Athens and brought word of a great victory for the
Greeks lead by Callimachus over the Persians lead by Darius.

They call the race the 'Marathon'
not the 'Athens'
.  The crucial point
is that Marathon is on the opposite coast from Athens and was the site of a
famous Greek victory against the Persians (Modern Turkey / Iran).

No wonder they refer to these legends as Greek tragedies; in this instance
sadly, the Spartans hit a religious time-out and would not help the Athenians,
and Phedippedes himself, hit a terminal 'Blue Screen'
when he returned to Athens to tell of the tell Sparta of the impending Persian 490 BC.

Johan Pietari Kolehmainen, known to the sports world as Hannes
Kolehmainen, was the first great distance runner of the Olympic Games.  His fame is primarily based on his performances at the 1912 Olympics at
which he won the gold medal in the 5,000 metres, the 10,000 metres, the
individual cross-country race, and set an individual world record for
3,000 metres in the 3,000 metre team race. A joyous spirit with a
seeming perpetual smile on his face, he was known as "Smiling Hannes,"
in stark contrast to the later seemingly ever-suffering distance running
legend, Emil Zátopek of Czechoslovakia. Hannes Kolehmainen was also the
first great Finnish distance runner, setting the stage for many to
follow him, including Paavo Nurmi, Ville Ritola, Albin Stenroos, Lauri
Lehtinen, Volmari Iso-Hollo, and Lasse Virén

In
Helsinki, the Olympic marathon winner was the great Emil Zatopek. The Czech legend had
already won the 5,000m and 10,000m and many thought him incapable of
finishing the marathon, but not only did he finish it, he won easily.

Sohn Kee-chung won the 1936 Berlin Olympic marathon and was listed
as being Japanese. However, he was actually a Korean.  In 1936 his
country was occupied by the Japanese so Kee-chung had to receive his
gold medal under a "foreign" flag.  In 1988, now 76, Sohn carried
the Olympic torch into the main stadium at the opening ceremony of the
Seoul Games. He was a very happy and proud man!

In the Olympic marathon of 1992 Young-jo Hwang made history for Korea.  His marathon victory came 56 years after Kee-Jung Sohn won the Olympic
marathon in Berlin in 1936 as a member of the Japanese team.

This time, as a member of the Korean team, Hwang came in first to the
applause from about 80,000 spectators in the stands of the Montjuic Stadium.
The 80-year-old Sohn was moved to tears to watch Hwang crowned with the
laurel of victory on the recovered its status as a marathon power.

Happy Ending to
the Munich 1972 Marathon

American Frank Shorter, who coincidentally was born in Munich, was
approaching the stadium when a German student Norbert Sudhaus, wearing a
track uniform, joined the race for the closing stages.  Imagine the
home crowd roar has the German 'athlete' came into sight apparently
leading the race.  Fortunately not all the officials were taken-in
and they corralled the imposter and frog-marched him off the track.

Suddenly, the natives turned hostile and started booing.  Now
Frank Shorter was somewhat miffed as he thought that an unsportsmanlike
crowd was catcalling him.  Rarely has an Olympic Marathon winner
had such a disappointing reception.  As a matter of trivia, this was the
third time in Olympic history that an American had won the marathon, but
in none of those races did the winner enter the stadium first.

Along with Abebe Bikila, Waldemar
Cierpinski is a two time winner of this gruelling race.