This is unbelievable- I've never seen anything like it ever. Check it
out, you will be amazed and please make sure to watch the video at the
bottom of this page to see this in action - you won't believe it.

Here is the biggest, longest and most comprehensive train set in the
world.  To give you an idea it displays 6 miles of track and covers an
area of over 10,000 square feet (1,150 square meters).

It is the life work of Frederick and Gerrit Braun.  The twin
brothers who are in their 40s, began work on the 'Miniature Wonderland' in
2000.  Their train set empire incorporates scenes from America,
Switzerland, Scandinavia, the Austrian Alps, and of course, Germany.

Sections of the German Train
Set 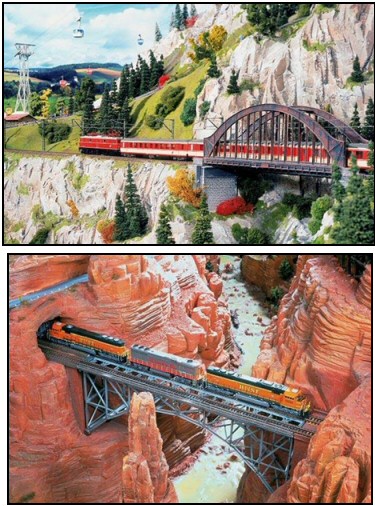 The American section features display models of the Rocky Mountains,
Everglades, Grand Canyon, and Mount Rushmore. While the Swiss section has a
reconstruction of the Matterhorn mountain.

You can begin to see the scale, and the detail in the pictures to the
right.

The Future
Twins Frederick and Gerrit Braun expect
their project to be finished in 2014, when the train set will cover about
20,000 sq ft, by that time the track will have doubled to over 12 miles.
Addition sections will feature models of parts of France, Italy and England.

Will and Guy wonder will they be satisfied until they have trains from
everywhere in the world, for example there are intersting trains in China,
India and South Africa. 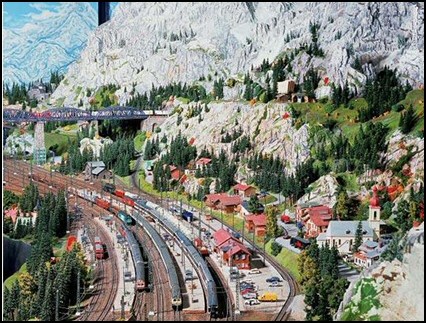 The Train Set at Night

Another example of their attention to detail is the 250,000 lights.
They are programmed to mimics night and day, and not only provide
illumination, but the lights become part of the show themselves.

Perhaps it's this picture of behind the scenes that makes us appreciate
that this is no ordinary train set.

Gerrit said: "Our idea was to build a world that men, woman, and children
can be equally astonished and amazed in".

Frederik added: "Whether gambling in Las Vegas, hiking in the Alps or
paddling in Norwegian fjords - in Wunderland everything is possible". The
world's biggest model train set.

Talk About Your Second Childhood "Boys" And Their Toys

Thousands of kilograms of steel and wood was used to construct the
scenery. The set is on display to the public and is so big that they employ
more than 160 people to show visitors around their creation. Open this
hyperlink for a 4 minute look at this Hamburg, Germany site./p>

Do not miss the video!
http://www.miniatur-wunderland.com/exhibit/video/4-minutes-wunderland/