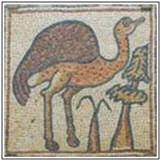 Here is a funny ostrich picture showing crazy Ostriches on the march.

There are three collective nouns for a group of ostriches, a pride, a flock and our favourite, a wobble of ostriches.

Another Ostrich on the Run

Ostrich with
Head in the Sand 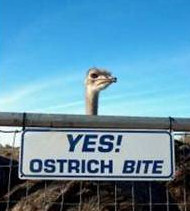 Picture of Ostriches Having
a Day Out

The ostrich egg is the biggest egg currently on the planet, large examples
may reach 20cm at their widest part.  Only dinosaur eggs have been larger.
It's not uncommon for ostriches to lay 10 eggs, and at about 3lb (1.5 kilos)
that's quite an investment.