The Story of a Hedgehog Put on a Diet 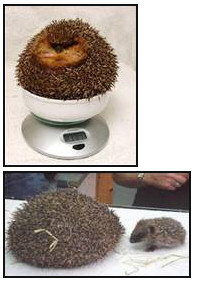 George weighed 2.2kg [4.8lb] when staff at the Wildlife Aid Centre in
Leatherhead, Surrey, England, discovered him in a volunteer's garden. He was put
on a high protein diet before starting a daily exercise regime, reports the BBC.

He now weighs 1.7kg [3.7lb] shedding 500g [1.1lb] on the strict diet. Becky
Banning, General Manager at the Wildlife Aid Centre, said George had originally
grown overweight due to eating high fat foods intended for birds. She added,
'Hedgehogs normally feed on whatever they find in the garden, so George was
picking up peanuts and bread. Now he's on a strict food regime, so he's fed cat
food once a day in the evening, and no bread. It's the hedgehog equivalent of
the Atkins diet, and it's about keeping him away from the fat and giving him
more protein.'

Staff at the Wildlife Aid Centre said the average adult hedgehog should weigh
between 600 and 700g [1.3 and 1.5lbs] and they expect George to reach that
weight in 4 to 5 months.

Here is a photographic comparison between an obese hedgehog and one of normal
size.

You Couldn't Make It Up: Assault with a Prickly Weapon

It has come to our notice that a New Zealand man has been accused of assault
with a prickly weapon: a hedgehog.

Police allege that a 27 year old male picked up the hedgehog and threw it at
a 15-year-old boy in the North Island east coast town of Whakatane.

The youngster had a large red welt and several puncture marks, police
commented, but he was not badly hurt. Sadly the hedgehog was dead when it
appeared in court.  We do not know whether he was alive when the assault took
place.

A Harsh Lesson in the Hedgehog
World

When Harry Hedgehog was four months old and it was time for his first road
safety lesson.  In the middle of the night Mum and Dad Hedgehog took him to the
nearby A27 between Portchester and Fareham.

'OK,' said Dad Hedgehog, 'you are to walk across the road as quickly as you can
all the time looking out for headlights.'

'What do I do if I see headlights?' inquired the young Harry.

'You sit perfectly still in the middle of the lane,' instructed Dad Hedgehog,
while Mum Hedgehog nodded wisely. 'That way the wheels pass by on either side of
you.'

Dad and Mum Hedgehog demonstrated this several times then told Harry it was his
turn.

Nervously Harry scurried across the road. As he reached the far lane bright
lines came rushing towards him. Harry did exactly as he was told and froze in
the middle of the lane.

There came a screeching of brakes and a dreadful squelching noise. 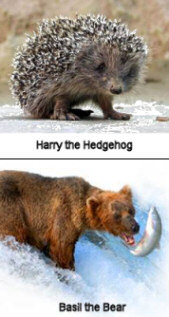 Harry Hedgehog meets Basil Bear who's going to fishing in Langstone Harbour.  Harry asks the Bear, 'Do you need firewood?'

Basil Bear answers, 'No, of course not, Harry.'

'Are you sure, Basil?'
'Get lost with your firewood enquiries, Harry,' shouts the now demented Basil
Bear.

So Harry Hedgehog goes away.

A rare blond hedgehog enjoys some autumn sunshine at  a rescue
centre after being found at a West Midlands, England, care home. His light
colouring makes him too vulnerable to predators to live in the wild Reports
BBC online.

Will and Guy speculate whether this blond / pink hedgehog (above) is
really the rare albino form (see below).  Or just a normal hedgehog
with a different coloured skin.  Only 1 hedgehog in 12,000 is born with
a mutant gene that results in no pigmentation.

Here is Another Batch of Interesting Hedgehog Facts and Trivia 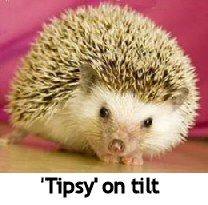 A hedgehog has been treated in an animal hospital after getting drunk on
fermenting apples in an orchard, Will and Guy have the latest on this funny
hedgehog story.  The animal was discovered lying on its back and
squealing last week and was helped by local wildlife rescue expert Ann
McCormack at "The Prickly Ball Hedgehog Hospital" in South Devon. No we have
not made this up!

Ms McCormack said, 'They had placed it in a guinea pig cage and it kept
going round in circles. The hedgehog kept falling over and was on its back
with its legs up in the air for most of the time. It was legless. This is
definitely the first drunk hedgehog I have found.  The next morning I
came in and turned the light on and she squealed really loudly.  She
obviously still had a big headache.'

The hedgehog, interestingly named Tipsy, will be fed up to a healthy
weight of 600g before being released back into the wild in the spring.

This joke was voted for by a panel of nine experts who decided that:
'Hedgehogs. Why can't they just share the hedge?' was the funniest and it
won the accolade for London comic Dan Antopolski, 36, who is known for his
surreal stand up routines.

Nine comedy critics sifted through more than 3,600 minutes of material to
find the winner of the "Dave Award for the Funniest Joke of the Fringe".
With nearly 18% of votes, Mr. Antopolski took top spot and walked away with
a trophy from TV channel Dave and a £1,000 cash prize.

The joke was taken originally from the Perrier Award-nominee's show
"Silent But Deadly".

Footnote:
Please send us your funny hedgehog pictures and, especially any hedgehog
stories for children.