Alfred Hitchock, going through customs, was asked by a customs official to state his occupation. Hitchock replied that he was a producer. 'What do you produce?' asked the official. 'Gooseflesh,' replied Hitchcock.

Picture of a Canadian Goose with Goslings 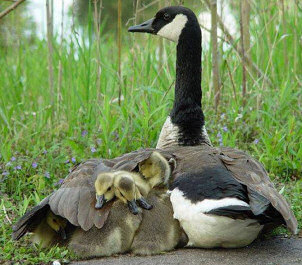 Interesting Facts About the Goose

There are lots of lovely names associated with goose.  The male is the gander, and the eggs hatch into goslings.  When in flight the group are called a 'gaggle of geese'. There aren't that many animals where the singular and pleural words have different stems, mouse and mice are the only other pair that come to mind. Also, there are probably only a handful animals which take their name from the female of the species, apart from goose, cow is the only other example that I can think of. This interesting variety of names tells me that the English must have a very old association with the goose.  For example, old-timers tell me that in their youth goose was more highly prized than chicken or turkey, especially at Christmas and Michaelmas.

A Gaggle of Geese 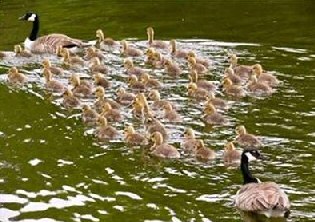 This pair of splendid Canada geese have an enormous gaggle of chicks to look after but seem very able to cope as they take their family for a swim on the River Thames at Caversham, Reading, England. 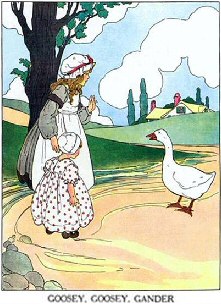 "Goosey Goosey Gander" is an English language nursery rhyme. The most common modern version that Will and Guy have found of the lyrics is: Goosey goosey gander, Whither shall I wander? Upstairs and downstairs And in my lady's chamber. There I met an old man Who wouldn't say his prayers, So I took him by his left leg And threw him down the stairs. Further research confirms that the earliest recorded version of this rhyme is in "Gammer Gurton's Garland" or "The Nursery Parnassus" published in London, England, in 1784. Like most early versions of the rhyme it does not include the last four lines: Goose-a goose-a gander, Where shall I wander? Up stairs and down stairs, In my lady's chamber; There you'll find a cup of sack* And a race* of ginger. *sack = wine *race = root or hand 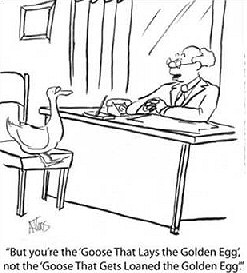 Will, being a former teacher of History, has read that amateur historian, Chris Roberts, writes that the rhyme is heavily linked to the propaganda campaign against the Roman Catholic Church during the reign of King Henry VIII. [1509-1547]  However, Will can find no corroborative evidence to support this claim, though he believes it is probably true. Come On You Two!

A Story About the Goose That Made Will and Guy Think

The next time you see Geese heading South for the Winter, flying along in V formation, you might consider what science has dis- covered as to why they fly that way: As each bird flaps its wings, it creates an uplift for the bird immediately following. By flying in V formation the whole flock adds at least 71% greater flying range than if each bird flew on its own.

People who share a common direction and sense of community can get where they are going more quickly and easily because they are travelling on the thrust of one another.

When a goose falls out of formation, it suddenly feels the drag and resistance of trying to go it alone and quickly gets back into formation to take advantage of the lifting power of the bird in front.

If we have as much sense as a goose, we will stay in formation with those who are headed the same way we are.

When the Head Goose

gets tired, it rotates back in the wing and another goose flies point.

It is sensible to take turns doing demanding jobs with people or with geese flying South.

Geese honk from behind to encourage those up front to keep up their speed.

What do we say when we honk from behind?

Finally, and this is important, when a goose gets sick, or is wounded by gunshots and falls out of formation, two other geese fall out with that goose and follow it down to lend help and protection. They stay with the fallen goose until it is able to fly, or until it dies. Only then do they launch out on their own, or with another formation to catch up with their group.

IF WE HAVE THE SENSE OF A GOOSE, WE WILL STAND BY EACH OTHER LIKE THAT.

The Fox and the Goose Story

Andy went on a journey accompanied by a fox, a goose and carrying an open can of corn. He happened upon a stream which he had to cross and luckily found a small boat that he could use to cross the river. Andy discovered he could only take himself and one other - the fox, the goose, or the corn - at a time. He could not leave the fox alone with the goose or the goose alone with the corn for obvious reasons. Can you work out how Andy gets all safely over the stream? Clue, there are four journeys. Scroll down to find out: 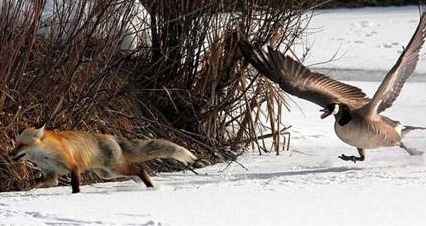 Answer To Fox and Goose Question:

The Geese In The Storm Story - How Saul Found God

There was once a man, Saul, who didn't believe in God, and he didn't hesitate to let others know how he felt about religion and religious holidays, like Christmas. His wife, on the other hand, did believe, and she raised their children to also have faith in God and Jesus, despite Saul's disparaging comments. One snowy Christmas Eve, his wife was taking their children to a Christmas Eve church service in the small community in which they lived.  She asked Saul to come, but he refused. 'That story is nonsense!,' he said.  'Why would God lower Himself to come to Earth as a man? That's ridiculous.' So she and the children went to church, and he stayed at home. That evening, the winds grew stronger and the snow turned into a blizzard. As Saul looked out the window, all he saw was a blinding snowstorm. He sat down to relax before the fire for the evening. Then Saul heard a loud thump. Something had hit the window.  Then another thump. He looked out, but couldn't see more than a few feet. When the snow let up a little, Saul ventured outside to see what could have been beating on his window. 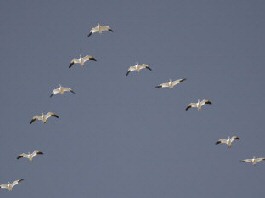 In the field near his house he saw a flock of wild geese. Apparently they had been flying south for the winter when they got caught in the snowstorm and couldn't go on. They were lost and stranded on his farm, with no food or shelter. They just flapped their wings and flew around the field in low circles, blindly and aimlessly. Saul, an animal lover, felt sorry for the geese and wanted to help them. The barn would be a great place for them to stay, he thought. It's warm and safe; surely they could spend the night and wait out the storm.  So he walked over to the barn and opened the doors wide, then watched and waited, hoping they would notice the open barn and go inside. But the geese just fluttered around aimlessly and didn't seem to notice the barn or realize what it could mean for them. Saul tried to get their attention, but that just seemed to scare them and they moved further away. He went into the house and came with some bread, broke it up, and made a breadcrumb trail leading to the barn.  They still didn't catch on.  Now he was getting frustrated. He got behind them and tried to shoo them toward the barn, but they only got more scared and scattered in every direction except toward the barn.  Nothing he did could get them to go into the barn where they would be warm and safe.  'Why don't they follow me?' Saul exclaimed.  'Can't they see this is the only place where they can survive the storm?' He thought for a moment and realised that they just wouldn't follow a human. 'If only I were a goose, then I could save them,' he said out loud. Then Saul had an idea. He went into barn, got one of his own geese, and carried it in his arms as he circled around behind the flock of wild geese.  He then released it. His goose flew through the flock and straight into the barn, and one by one the other geese followed it to safety. He stood silently for a moment as the words he had spoken a few minutes earlier replayed in his mind: 'If only I were a goose, then I could save them.' Then Saul thought about what he had said to his wife earlier. 'Why would God want to be like us? That's ridiculous.' Suddenly it all made sense. That is what God had done. We were like the geese, blind, lost, perishing. God had His Son become like us so He could show us the way and save us. That was the meaning of Christmas, he realised. As the winds and blinding snow died down, his soul became quiet and pondered this wonderful thought. Suddenly he understood what Christmas was all about, why Christ had come. Years of doubt and disbelief vanished like the passing storm. Saul fell to his knees in the snow, and prayed his first prayer, 'Thank You, God, for coming in human form to get me out of the storm.' This story, say Will and Guy, appears to be a adaptation of a tale written by written by Louis Cassels in 1959 which we have slightly developed

Come on You Two! 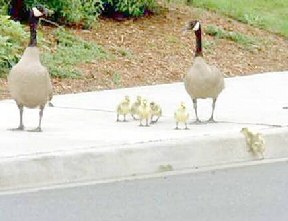 A Picture of Two Geese on A Pond 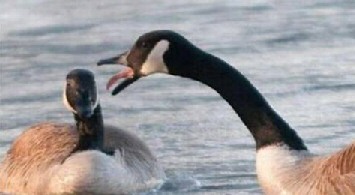 One goose says to the other, 'What do you do whenever you feel lonely?' The other one said, 'No problem, I just have a gander around.'
Incidentally, a goose is one of those animals like cows which is named after the female of the species. 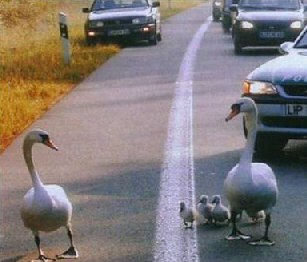 We think they are probably swans rather than geese.

THE OLD GOOSEFAIR! by Joy James