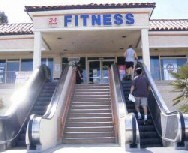 Lose weight and have a laugh. 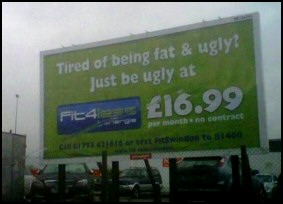 The Doctor has told Will that he should start a fitness programme.

........and Will, not wanting to harm his old, rather corpulent, body,
has decided to put the following weekly regimen into practise:

Kneel in prayer
Bow my head in thanksgiving
Raise my hands in
praise
Hug and cuddle someone and encourage them
What an amazing
workout! 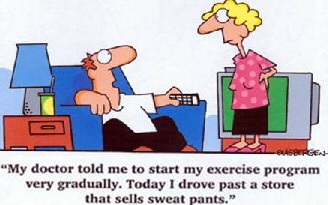 Jack, decidedly overweight, and not at all bright, asks Doctor Mayo at
Portchester Health Centre, for help in losing weight. The doctor advises
Jack to run 10 miles a day for 30 days.
This, she promises, will help
Jack lose as much as twenty pounds in a month.

Jack, naturally very excited, follows Doctor Mayo's advice to the letter,
and, after thirty days, he is delighted to find that he has, indeed, lost
twenty pounds.

Delighted, Jack 'phones Doctor Mayo and thanks her profusely for the
wonderful advice which had produced such a tremendous result.

At the end of the conversation, however, he asks one last question, 'How
do I get home now, Doctor, since I am some 300 miles away?'

You could walk this over to your friends but it's less hassle to just
e-mail it to them. 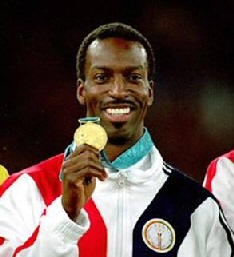 This story is allegedly true, and is about one of the finest
athletes Will and Guy have ever seen: Michael Johnson.

Apparently the Olympic gold medal runner was on his way to a night club
with some friends. At the door, the bouncer turned to him and said, 'Sorry,
mate, you can't come in here, no denim allowed.'

Michael was quite upset at this and retorted, 'Don't you know who I am?
I'm Michael Johnson.' 'Then it won't take you long to run home and change,
will it?' concluded the bouncer with finality.

John, a regular runner, asks his wife, Jayne, 'What do you love
most about me? My tremendous athletic ability or my superior intellect?'
'What I love most about you,' responded Jayne quickly, 'is your enormous
sense of humour.'

You realise how your body has changed when your children look through
your wedding photos and want to know who mum's first husband was.

A Hilarious and Funny Story About Joggers

Paula had been driving all night and was still at least six hours away
from her destination. It was almost ten o'clock in the morning and she was
extremely fatigued. After dozing off and nearly crashing into a telephone
pole, she decided to pull into a lay-by and rest. Paula switched off the
engine and closed her eyes and drifted off, gratefully, to sleep.

As she did an old man in a bright yellow jogging tracksuit knocked on her
window, scaring her half to death. 'Sorry to wake you, ma'am,' he huffed,
jogging on the spot, 'But can you tell me what time it is?'

Paula glanced at her watch. '10:00,' she answered through the window.

The old man thanked her, then left.

'Just my luck,' she muttered. 'I'm parked on someone's jogging route.'
With a sigh, she settled back into her seat and tried again to fall asleep.

Two male joggers in their thirties knocked on her window. If she hadn't
been so dead tired, she may have found them attractive. Now, they were just
annoying.

'Do you have the time?' his fair-haired friend asked.

'Thanks,' they smiled as they jogged off.

Paula looked down the road and saw more joggers coming her way. Now
irritated, she found a pen from the glove box and scrawled: 'I DO NOT KNOW
THE TIME' on the back of a magazine.  She put the hastily constructed sign in
the window and settled back to sleep.

Soon a thin, pale jogger knocked on the window just as she had started
dozing off.

Paula pointed at the sign and shouted, 'For goodness sake, can't you
read?'

A Diet is a Weigh of Life 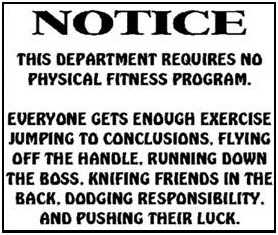 Will's therapist told him that the way to achieve true inner peace was to remember to always finish what he started.  So today,  Will has finished 2 bags of potato crisps, a gallon of ice-cream, two buckets of chicken, and a chocolate cake.  He feels much better already. 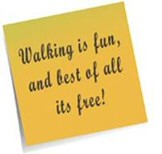 Walking
for 40 minutes a few times a week is enough to preserve memory and keep
ageing brains on top form, research shows, Will and Guy have read recently. 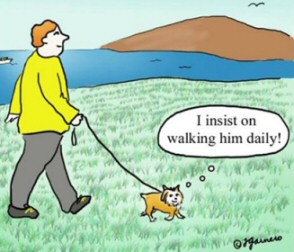 Moderate exercise increased the size of the hippocampus, an area of the
brain that makes memories, in 120 volunteers. The year-long trial, published
in Proceedings of the National Academy of Sciences, showed performance on
memory tests also improved.

Exercise may buffer against dementia as well as age-related memory loss.
The latest work looked at healthy people in their 60s rather than people
with Alzheimer's or other forms of dementia.

Until a cure is discovered, finding cheap and simple ways to reverse this
trend is imperative, say experts.

Did Fitness Work Out?

When It's Time to Workout!