What intrigues us with this picture is whether the dog is coming out of the driver's door or the passenger's door? 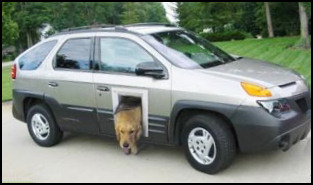 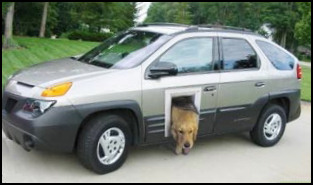 A further complication is whether you, or your dog drives on the left or the right? Whatever, the picture tells the story.  Words only confuse. See more funny pictures of dogs 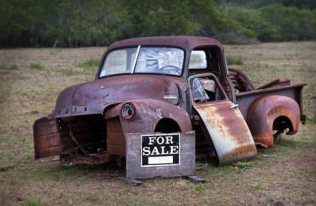 A Strange But True Funny Story:

To all those who smirked at this week's news that male drivers waste six million hours a year by refusing to admit they are lost, we reply with the salutary tale of Michael Chapman, arrested and charged with stealing a car after stopping to ask for directions at the house of the car owner's father. Chapman, 54, allegedly stole the motor in Hopedale, some 130 miles from Columbus, Ohio, and drove it for three miles before stopping randomly to ask the way at the house of Thomas Eltringham, who instantly recognised the gold Buick as his daughter Norma's. See where admitting your ignorance gets you? Footnote: I am from a town very near Columbus, Ohio. We often said Columbus was the only town where you could buy a baby grand piano and the seller would throw in a shot gun.   Joy S. (Website visitor)