Share
Tweet
Pin
Share
Email
One of the eternal conundrums is: Do dogs look like their owners?  If this perceived wisdom is indeed true, is it that dog grows to mimic its owner, or does the owner choose a dog in their own image? 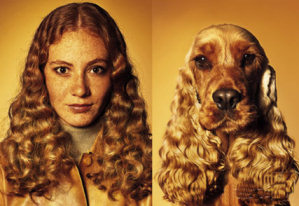 What beautiful hair each has. 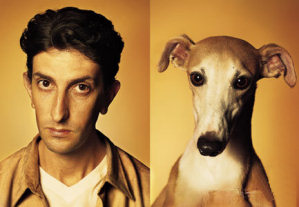 My, those noses look similar. 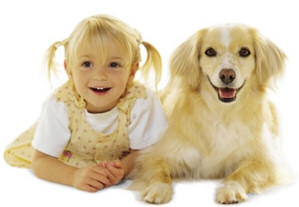 Because so many people make comments like, 'My friend Jo looks like their dog Rover', there must be some truth in saying.   Many of the examples on the internet are posed, possibly in response to a 'Dogs Look Like Their Owner' competition.  However, the origin of the saying pre-dates the internet, and even pre-dates photographs. If we look further into the phenomenon, a number of reasons spring to mind.  The most obvious effect is that people look at shop / litter / kennel of dogs and pick the dog that most looks like them.  In other cases people truly love their dog, pamper it, and start grooming the animal and themselves along similar lines. Another factor is that the comparison is invariably between a person and their dog.  I have never heard it said that Jo looks like their cat, or that Steve looks like their hamster.  Occasionally you hear comments that Fred looks like his cows, but let's not peruse that avenue. Close observation reveals that the dogs look like their owners only if they are pure-bred.  Mongrels don't show the same affinity.  I would also suggest that when the similarity occurs, that it's recognisable almost as soon as the owner brings the dog home. Two final factors to support this assertion the dogs really do look like their owners, firstly reports or rumours appear from all societies that keep dogs.  Secondly, the gender, or even the age of the owner does not matter.

Will and Guy's Random Thoughts About Dogs

We found that a recent survey indicates that the 'Little and Large' of the canine world can cause more damage than any other breed. Apparently, in its lifetime, the average Chihuahua causes £638 [approx. $1,130 USD] worth of damage, just £30 less than its big cousin. The dogs often soil carpets, scratch doors, chew sofas and break ornaments. Another surprise inclusion on the league table of mischievous mutts is the Dachshund. These 'sausage dogs' cause an average £444 [approx. $785 USD] of damage during their lives. On the other hand, we have been told by veterinary friends that the pug and the huge St Bernard are the least destructive breeds, the former tending to be better behaved and more easily trained, the latter more gentle and stable in nature.

Will These Two Grow Alike 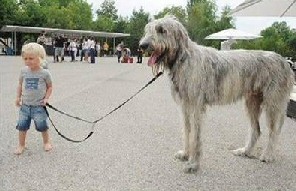 Two-year-old Yola, from Germany, takes her Irish wolfhound Trorrent for a walk in Bregenz, Austria. Will they grow alike?

How to Create an Amazing PowerPoint Presentation

Making presentations in PowerPoint is satisfying, moreover, it's easy to get started. The PowerPoint program is intuitive to learn and easy to create your own PPT slides and build them into a slide show.  If you have Microsoft Office you may find that you already have PowerPoint along with Word and Excel. One way to begin is simply to open any example presentation.  Just download one of our free PPT files and open it with PowerPoint.  As you examine the slides, so it will become obvious how to add pictures and titles, if you do get stuck, ask the wonderful built-in 'Help'.  To make an amazing slide show requires these skills; Good luck with creating your amazing PowerPoint Presentation Will and Guy