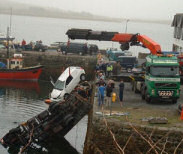 Here is a selection of our clean short jokes for November:

Our mission is to amuse you with a wide variety of funny clean jokes, amusing anecdotes and thought provoking images.  We also aim to
surprise, but never to shock or offend.

A past juicy enough that she's looking forward to retelling it in her old age...

One friend who always makes her laugh... and one who lets her cry...

See more 'A Woman Should Have..'

Old ranch owner John farmed a small ranch in Montana. The Montana Wage and Hour Department claimed he was not paying proper wages to his workers and sent an agent out to interview him.

'I need a list of your employees and how much you pay them,' demanded the agent.

'That would be me,' replied old rancher John.

Rhoda and Harry go for a meal at a Chinese restaurant and order the 'Chicken Surprise.' The waiter brings the meal, served in a lidded
cast iron pot. Just as Rhoda is about to serve herself, the lid of the pot rises slightly and she briefly sees two beady little eyes looking around before the lid slams back down.

'Good grief, did you see that?' she asks her husband, Harry. He hasn't, so she asks him to look in the pot. Harry reaches for it and again the lid rises, and he sees two little eyes looking around before it slams down. Rather perturbed, he calls the waiter over, explains what is happening, and demands an explanation.

'Ah! So sorry, is mistake' says the waiter, 'I bring you Peeking Duck!'

Manuel Oliveira owned an ice cream shop in Mérida, Venezuela; and he reported that he sold 567 flavours, including onion, chilli, beer, eggplant [aubergine], smoked trout, spaghetti and parmesan, chicken with rice, and spinach. He said some flavours fail; he once abandoned avocado ice cream, and tossed out 99 pounds of it, because it wasn't smooth enough.

The Doctor has told Will that he should start a fitness programme.

........and Will, not wanting to harm his old, rather corpulent, body, has decided to put the following weekly regimen into practise:

Ten rules for a happy marriage:

Heavily-armed troops parachuted into a Colorado prison, but they were not staging a daring rescue they had simply landed off target. Military officials said the 25 Special Operations Command forces were on a training mission. Their target was Fremont County Airport but they ended up in a field in the grounds of Fremont Correctional Facility instead.

Thankfully, armed prison guards were able to identify the incomers as soldiers and held their fire, but the defence department refused to say exactly who they were. 'We don't know who they were and I'm not sure we'll ever know who they were,' said the Colorado Department of Corrections. 'Everyone acted appropriately.'