July's Winner in the Will and Guy 'Loser Competition'

This month's best loser has to be Mr Joshua Mullen from Mobile, Alabama, USA.
Finding that his shed had a nest of bees living in it you will find it hard to
believe how he attempted to get rid of them.

Mr Mullen soaked some towels in gasoline [petrol] and placed them carefully
in the shed in order to remove the bees. However, the shed erupted in flames
with a loud 'whoosh'. It appears that the fire started when the pilot light of a
hot-water heater in the shed ignited fumes from the petrol.

This picture is not of the actual blaze in Mobile:
The fire caused some $80,000 [almost £41,000] worth of damage but luckily nobody
was hurt in the conflagration. We have heard that Mr Mullen told reporters,
'Looking at all this, there might have been a better way. It was a mistake. I
wish I hadn't done it, but I did.'

The expressions, 'I don't believe it,' and 'You cannot be serious,' came to
mind when Will and Guy discovered this story about an elderly Polish gentleman.
We think it has to be runner up in the loser of the month competition.

Having been driven quite mad by an invasion of ants into his apartment which
is in a block of flats in Lublin, eastern Poland, Mr Marcin Bartosz, aged 74,
poured gallons of insecticide into a ventilation shaft in order to rid the
condominium of the pests. When this had no effect whatsoever on the ants, the
senior citizen decided to throw a burning towel after them and into the shaft.

The explosion that followed left Mr Bartosz with third degree burns and a
stay in the local hospital. Incredibly, we have found out that none of his
neighbours was in any way hurt.

An unidentified English woman, according to the Sunday Express was climbing
into the bathtub one afternoon when she remembered she had left some crumpets in
the oven. Naked, she dashed downstairs and was removing the crumpets when she
heard a noise at the door. Thinking it was the baker, and knowing he would come
in and leave a loaf of bread on the kitchen table if she didn't answer his
knock, the woman darted into the broom cupboard.

A few moments later she
heard the back door open and, to her eternal mortification, the sound of
footsteps coming toward the cupboard. It was the man from the gas company,
come to read the meter.' Oh, 'stammered the woman, 'I was expecting the
baker.' The gas man blinked, excused himself and departed. 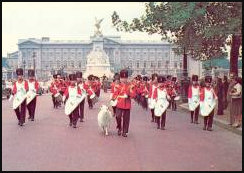 In the UK goats are often paraded by Army regiments and they appear on
official occasions. The goat is always a billy-goat and is not a mascot but a
member of the regiment. Honorary Lance Corporal William Windsor,1st Battalion
Royal Welch Fusiliers, is such a goat. However, he has been demoted since he
misbehaved whilst on parade in Episkopi garrison, Cyprus, last month.

This regimental goat attempted to poke his horns into the drummer's bottom
while on parade; he then refused to march or stay in line and has suffered
the consequences: he has been busted down to Private.

A disgraced British army goat has been reinstated
to his rank of lance-corporal after shining on parade last week. Billy
Windsor, mascot of the 1st Battalion The Royal Welsh, was demoted to
fusilier - equivalent of private soldier - last June after ruining a parade
for the Queen's birthday at a military base in Cyprus, when he ran amok.

In his first public appearance since his demotion, Billy, seven, performed
exceptionally and he was reinstated by his commanding officer.

Response to a woodland fire in the south of France's Cote d' Azur was billed
as a marvel of modern fire-fighting technology in the newspaper Le Monde. Two
specially-built flying boats zoomed in, skimmed the waters of the Mediterranean,
scooping vast amounts of water into their belly tanks, and then dropped the
water on the hillside fire extinguishing all the flames.

All was jolly and the wine flowed freely until a body was found in the
ashes of the fire.' The coroner found that the gentleman had apparently
fallen from a great height, suffering serious injuries before being burned
to death. The report further noted that the victim was wearing a bathing
suit, snorkel, and flippers.'

Loser of the week

A burglar was caught after he fell down a chimney while escaping over the roof of a house he had just broken into. Police in Maastricht, Holland, arrested the 33-year-old after being called out by the house
owners who heard his calls for help. The man had tried to flee out of a roof window with his booty of cash and jewellery, but tumbled in the dark and got stuck inside the chimney.

Could be the Loser of the Month?

A thief caught shoplifting a packet of cheese from a supermarket in Germany tried to make his getaway in a cement mixer, but he was quickly apprehended by police.

'He was out on the job and suddenly
got hungry, as honest workers sometimes do,' said police spokesman in the eastern city of Chemnitz. When a store detective in the town of Limbach-Oberfrohna caught the man stealing a £1.94 [$4USD] packet of
processed cheese, the 55-year-old broke free and leaped into his cement mixing truck outside, police said. The shop alerted police, who arrested the man when he stopped his getaway vehicle at a red light a few
hundred yards away.

A German man returned home from a weekend break to find his flat had been 'broken into' and completely refurbished. Gunther Hagler, 45, called the police after arriving at his
flat in Frankfurt to find it had been renovated; his fridge had been replaced, the walls given a fresh coat of paint, windows cleaned and new furniture installed. Nothing had been stolen, even the food from the
old fridge had been placed in the new one. Gunther, naturally was astonished and mystified.

Police solved the mystery when they called the landlord to find out if anyone else had access to a key. They
discovered he had ordered a complete renovation of the flat next door - but had handed over the wrong key.