Here is Will and Guy's collection of classic tales.

I am sitting on a soft maroon leather sofa across from a large wooden desk. Hard, bright lights are blaring on me, making me very warm. The studio is much smaller than I thought it would be. Efficient people are moving around with cameras and papers. A tall, thin man wearing a very expensive salt-and- pepper hairpiece, a navy blue suit, and a red tie, enters the room. He walks toward me, and shakes my hand.

"Five minutes and we are on. Are you okay?" he asks, as he takes his place by the desk. I shake my head and answer, "Yes."

I'd better be okay. I've spent close to a week preparing for this day. My blue dress with a simple strand of pearls was selected after trying on half of my closet. My straight page-boy grey hair was professionally cut and styled. It lays just right. Instead of my usual five-minute makeup job, I sat patiently while an artist spent 50 minutes transforming my 70-year-old face into that of a 50-year- old model; eyes bright and shiny, skin wrinkle-free and smooth with just a touch of a warm glow, and dark pink lipstick drawn on without a smudge.

This was my first television appearance with a famous interviewer. After 20 years of writing, my latest novel has made me an overnight success!

I spent two days re-reading my novel, taking notes as if I were a school child taking a course. I needed to make sure I remembered the names, connections, and dates. I was once embarrassed by a radio interviewer who questioned my description of 1950s car. Besides the details in the book I was prepared to answer the normal questions such as, "Tell me about your new book," or, "How did you get started writing?"

Perry Carleton did his opening shtick, and then welcomed me. He turned away from the cameras, and starred into my face with his large brown eyes.

"Susan, your first five books are murder mysteries, following a familiar pattern, though some have some very gruesome characters," he said. "Your new book is very different. Why?"

"Perry, I felt like it was time to branch out," I answered. "My novel, Friends, was written for the women who have depended on each through the years." Perry brought his cup of coffee to his lips, and took a sip before saying, "Susan, I believe this book is your biography."

He sent an emotional wave through my body. My voice cracked as I answered. "The book is fiction, and in fiction one can let her mind run
wild. Of course there is some of an author's personality and history in everything she writes."

His face took on a devilish grin. "There are four women in the story. I would like to know which woman you are.

"Are you Alice, the very spiritual, loyal, and understanding friend?

"Are you Cate, the headstrong, sexy kitten always showing her Cleavage, and creating trouble?

"Are you Carol, the very efficient, proper, and frustrated lady?

"Or are you Dina, the quiet, strong, and very loyal lady?"

I swallowed hard and lowered my face, staring at the floor. I hadn't expected someone who had actually read my book in depth. I expected Perry to be an arrogant celebrity who wouldn't have given up his time. I thought he would refer to notes an aide had made for him, but there were no notes on his desk.

I was feeling warm, and very nervous. "Perry, I told you the book is fiction," I answered a little too harshly.

"Come on Susan," he shot back. "You haven't answered my question." He turned to the audience and said, "Audience, clap if you want to know which woman is modeled after Susan?"

As the audience clapped I slid down in my seat. Perry turned from the audience to me with his arms opened, questioning. I took a deep breath, and said, "None of the above. I was the little girl."

"The little girl?" he answered quizzically.

"Yes, the perfect little girl, Carol's daughter," I revealed. "The little girl who could do nothing wrong because her proper mother would be
disappointed in her."

"That little girl drowned herself in the novel," Perry remembered. "Did you ever think of suicide?"

"Never," I answered, restraining myself from adding the words, "until now." What I said was, "Instead I became a writer who could let her
characters be sex fiends, murderers, rebels, terrible or wonderful people, and I could live through them." And then I recited a poem:

Your Voice Echoes in My Head

"Be kind, be nice, and above all else continue to please
Then new friends you will develop with ease"
Your voice still echoes through my head
Something I'm afraid will continue until I'm dead

From the depths of my soul
I wish I could let go
A scream, a yell,
a stomp of my shoe
If only I could tell someone to go to hell, too

My pain, anger, and loss of hope continue to stay inside
Headaches, stomachaches, lack of strength and pride
Only tell that my head still is in the sand, you see
How I wish I could just be me

But your voice still echoes in my head
Something I'm afraid will continue until I'm dead.

A deeply personal revelation punctuated by a poem made for some great TV that evening. Perry sat back with a look that was both flabbergasted and pleased.
I think I had the same look--flabbergasted that I had revealed 70 years of pain on TV, and pleased that I had finally gotten it off my
chest.

The Usher: A Lovely, Clean and Funny Short Story 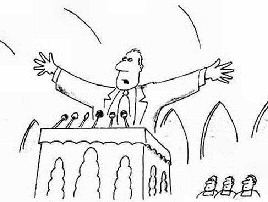 Cora, an elderly woman walked into her local St Michael's Church. The friendly usher greeted her at the door and helped her up the flight of
steps, 'Where would you like to sit?' he asked politely.

'The front row please,' Cora answered amiably.
'You really don't want to do that,' the usher said, 'This vicar is really boring.'

'Sonny, do you happen to know who I am?' Cora inquired, looking directly at him.
'No.' he rejoined.

'I'm the vicar's mother,' Cora announced indignantly.
'Do you know who
I am?' he asked.

'No.' she said.
'Good,' he answered and disappeared.

The Old Witch - Classic Fairy Tale by The Brothers Grimm

There was once a little girl who was very wilful and who never obeyed when her elders spoke to her - so how could she be happy?

One day she said to her parents, 'I have heard so much of the old witch that I will go and see her. People say she is a wonderful old woman, and has many marvellous things in her house, and I am very curious to see them.'

But her parents forbade her going, saying, 'The witch is a wicked old woman, who performs many godless deeds - and if you go near her, you are no longer a child of ours.'

The girl, however, would not turn back at her parents' command, but went to the witch's house. When she arrived there the old woman asked her:

'Why are you so pale?' 'Ah,' she replied, trembling all over, 'I have frightened myself so with what I have just seen.'

'And what did you see?' inquired the old witch.
'I saw a black man on your steps.'
'That was a collier,' replied she.

'Then I saw a gray man.'
'That was a sportsman,' said the old woman.

'After him I saw a blood-red man.'
'That was a butcher,' replied the old woman.

'But, oh, I was most terrified,' continued the girl, 'when I peeped through your window, and saw not you, but a creature with a fiery head.'

'Then you have seen the witch in her proper dress,' said the old woman. 'For you I have long waited, and now you shall give me light.'

So saying the witch changed the little girl into a block of wood, and then threw it on the fire. When it was fully alight, she sat down on the
hearth and warmed herself, saying:

'How good I feel! The fire has not burned like this for a long time!'

If you don't see the topic that you are interested in try our 'Search' box because we have a large selection of amusing yarns, tall tales and
classic short stories.  Also, here are our best short stories.

Pick Up The Gauntlet

This was the situation: Abraham Thornton was accused of having drowned
Mary Ashford, but he was acquitted by the jury. This acquittal did not
satisfy popular feeling, and the brother of Mary Ashford appealed.

Now Thornton was well advised as to his next proceeding, and, following
the still existent law of this early time of which I write, he went to
Westminster Hall, where he threw down, as a gage of battle, an antique
gauntlet without fingers or thumb, of white tanned skin ornamented with silk
fringes and sewn work, crossed by a narrow band of leather, the fastenings
of leather tags and thongs.

This done, he declared himself ready to defend himself in a fight, and so
to uphold his innocence, saying that he was within his rights, and that no
judge could compel him to come before a jury.

This was held to be good and within the law, so Abraham Thornton won his
case, as the brother refused to pick up the gauntlet. The scandal of this
procedure caused the abolishment of the trial by battle, which had remained
in the country's laws from the time of Henry II, until 1819.

In words of Dion Clayton Calthrop on Richard 1.

Once upon a time there was a good old woman who lived in a little house. She had in her garden a bed of beautiful striped tulips.

One night she was awakened by the sounds of sweet singing and of babies laughing. She looked out at the window. The sounds seemed to come from the tulip bed, but she could see nothing.

The next morning she walked among her flowers, but there were no signs of anyone having been there the night before.

On the following night she was again wakened by sweet singing and babies laughing. She rose and stole softly through her garden. The moon was shining brightly on the tulip bed, and the flowers were swaying to and fro. The old
woman looked closely and she saw, standing by each tulip, a little Fairy mother who was crooning and rocking the flower like a cradle, while in each tulip-cup lay a little Fairy baby laughing and playing.

The good old woman stole quietly back to her house, and from that time on she never picked a tulip, nor did she allow her neighbours to touch the flowers.

The tulips grew daily brighter in colour and larger in size, and they gave out a delicious perfume like that of roses. They began, too, to bloom all the year round. And every night the little Fairy mothers caressed their babies and rocked them to sleep in the flower-cups.

The day came when the good old woman died, and the tulip-bed was torn up by folks who did not know about the Fairies, and parsley was planted there instead of the flowers. But the parsley withered, and so did all the other plants in the garden, and from that time nothing would grow there.

But the good old woman's grave grew beautiful, for the Fairies sang above it, and kept it green; while on the grave and all around it there sprang up tulips, daffodils, and violets, and other lovely flowers of spring.