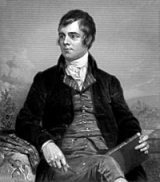 Burns night celebrates the birthday of Scotland's finest poet.  Robert Burns was born on 25th of January 25 1759.  His father, William Burness was a tenant-farmer in Alloway near Ayr. Burns is often known as Rabbie Burns.  Burns died in Dumfries on 21st of July, 1796.

It was only when researching these Scottish jokes that we remembered how dour, and mean the Scot's can be.  Before people complain about stereotyping, all Will and Guy can say is that the material was provided by a Scotsman!  This reveals that while Scots have elevated whinging to an art form, they have not lost the ability to laugh at themselves.

Cheap and cheerful lodgings
A lodger in a Scottish guest house in Milngavie, near Glasgow, was on his way to the bathroom carrying his shaving gear, when the landlady stopped him and said, 'Have you got a good memory for faces, Mr MacGregor?'

'That's just as well,' she said, 'because there's no mirror in the bathroom.

Hostile Natives
MacTavish visited London for his annual holiday and stayed at a large hotel.  However, he didnae feel that the natives were friendly.

'At 4 o'clock every morning,' he told a friend, 'they hammered on my bedroom door, on the walls, even on the floor and ceiling.  Och, sometimes they hammered so loud I could hardly hear myself playing the bagpipes.'

Job hunting in Scotland
'Are you looking for work Jock?'
'Not necessarily - but I'd like a job.'

Scotland - The home of golf
Sign at a Scottish golf course:
'Members will refrain from picking up lost balls until they have stopped rolling.'

Canny Scots
At an auction in Glasgow a wealthy American announced that he had lost his wallet containing £10,000 [$20,000USD] and would give a reward of £100 to the person who found it. From the back of the hall a Scottish voice shouted, 'I'll give £150.'

Scots rarely drink
MacDonald was in poor health. He asked his friend MacDougal if he would pour a bottle of scotch over his grave if he should die one of these days.

MacDougal said, 'Sure'n I'll be glad, laddie, but would you mind if I passed it through my kidneys first?'

Scottish Kirk (Church) Announcement
The following was seen on a poster outside a Kirk in Arbroath: DRINK IS YOUR ENEMY

Adjacent to this was another poster which said: Love your enemy.

Ear Muffs
Winters can be extremely cold in northern Scotland, so the owner of the estate felt he was doing a good deed when he bought earmuffs for
his farm worker, Archie.

Noticing, however, that Archie wasn't wearing the earmuffs even on the coldest day, the owner asked, 'Didn't you like the earmuffs I gave you?'   Archie replied, not wishing to upset his employer, 'Och, they are a wondrous thing.'

'Then why don't you wear them then?'

Archie explained, 'I was wearing them the first day, but somebody offered to buy me a drink and I didnae hear him.' 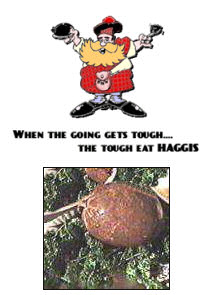 Maître d'hôtel: 'Are you here for a special occasion?'
Campbell: 'Aye, we won the third prize in the annual Robert Burns Contest, a haggis dinner for two.'

Maître d'hôtel: 'What were the other prizes?' Campbell: The second prize was a single haggis dinner, and, if you won the first prize, you didnae have to eat the haggis.'

Footnote: My theory is that all of Scottish cuisine is based on a dare.  Mike Myers

The US government said it is planning to relax the ban on imported meats which prevents the sale of haggis.

The Scottish government said it was greatly encouraged by the move, which was also welcomed by haggis producers.

The ban was introduced in 1989 because of concerns about the safety of British meat during the BSE scare.

On the eve of Burns night, the US Department of Agriculture said new regulations were being drafted, in line with international standards.

Robbie Burns and the Librarian
A man walks into the library and at the enquiry desk says, 'Robert Burns, the complete works.'

The librarian looks up and says, 'I am sorry Mr Burns, the Massage Parlour is back outside and the next door to this.'

A Scottish Lady
An armed, hooded, robber burst into the Bank of Scotland in Princes Street, Edinburgh, and forced the tellers to load a sack full of cash. On his way out the door with the loot, one brave Scottish customer grabbed the hood and pulled it off revealing the robber's face. The robber shot the Scotsman without hesitation!

He then looked around the bank to see if anyone else had seen him. One of the tellers looked straight at him and the robber walked over and calmly shot him also. Everyone by now was very scared and looking down at the floor.

'Did anyone else see my face?' shouted the robber. There were a few moments of silence, then one elderly Scottish lady, looking down,
tentatively raised her hand and said, 'I think my husband might have caught a glimpse .....'

The Difference
What's the difference between Bing Crosby and Walt Disney? Bing sings - and Walt disnae.

The Kilt
Did you hear about the Scotsman who washed his kilt? He couldn't do a fling with it.

The Bard
Robert Burns walks into a pub. The barman says....You're Bard

Boris Johnson is being shown around a London hospital.  Towards the end of the visit, he is shown into a ward with a number people with no obvious signs of injury or disease.

He goes to greet the first patient and the chap replies: "Fair fa' your honest sonsie face, Great chieftain e' the puddin' race!  Aboon them a'
ye tak your place, Painch, tripe, or thairm; Weel are ye wordy o' a grace as lang's my arm."

Boris, being somewhat confused (easily done) goes to the next patient and greets him.
The patient replies: "Some hae meat, and canna eat, and some wad eat that want it, but we hae meat and can eat, and sae the Lord be
thankit."

The third starts rattling off: "Wee sleekit, cow'rin, tim'rous beastie, O, what a panic's in thy breastie! Thou need na start awa sae hasty, wi
bickering brattle! I wad be laith to rin an chase thee, wi murdering pattle!" Boris turns to the doctor and asks: "Is this mental ward?"

"No" the doctor replies, "It's the Burns unit."

How to Grow Your Own Haggis

Haggis is best grown from cuttings from the parent tuber than from seeds.  Make sure that you buy your haggis tuber from Scotland.  Beware French, or Romanian imitations.

Take a sharp knife - my aunt used her tongue, but I wouldn't recommend that on hygiene grounds - and cut cubes  of the haggis
tuber 5cm square.

Take an old cup and fill it with sheep dung. Water liberally.  After a week dust the bottom (the cutting's, not yours) with a rooting hormone powder.  Buy the best 'Robbie Burns' compost and plant the cuttings in the compost.  Place them on a radiator so that they get bottom heat.

After ten days, your haggis cuttings should sprout little white fingers. Transfer them to your conservatory, if you haven't got a conservatory, a garage works fine.  At the end of the December harvest them, and put them in a dark cupboard for about 3 weeks.  On Burns day cut open your Haggis and fill with a lambs stomach, oats, deer liver and a chopped onion. The final secret ingredient is a leg - it's your leg which I have just pulled!

How Much Haggis is Too Much? 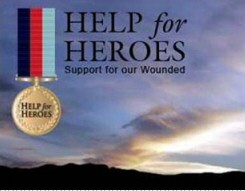 John Davis, 17, a schoolboy from Edinburgh, Scotland is thought to have set a new world record for speed-eating haggis after gobbling a pound of the delicacy in two minutes.

He beat 30 competitors from around the world to win the event at the inaugural Edinburgh International Haggis Championship in June 2011 so Will and Guy have discovered.

The event was organised to raise funds for the Help for Heroes charity, which assists injured British soldiers.

A thoughtful Scottish husband
Did you hear about the thoughtful Scotsman who was heading out to the pub? He turned to his wee wife before leaving and said, 'Jackie - put your hat and coat on lassie.'

She replied, 'Awe Iain that's nice - are you taking me to the pub with you?'

'Nah, just switching the central heating off while I'm oot.'

As with most romantic poets, Burns had many love affairs.  While he married Jean Armour, also wrote poetry about Eliza Burnett, for example: 'There has not been anything nearly like her in all the combinations of Beauty, Grace and Goodness the great Creator has formed, since Milton's Eve on the first day of her existence.'

Robert Burns is pictured on the £5 banknote issued by the Clydesdale Bank of Scotland.

The Selkirk Grace - As First Given By Robbie Burns

Some hae meat and canna eat, And some wad eat that want it;
But we hae meat, and we can eat,
Sae let the Lord be thankit.

The format for a Burns Supper ranges from formal gatherings of scholars, to uproarious rave-ups of drunkards. Most Burns Suppers fall in the middle ground, some literary tributes and a moderate amount of drinking.  The better Robbie Burns suppers have a format of recitation of works by the Bard, followed by a traditional Scottish meal featuring a haggis, all washed down with Scotch whisky.

In Will and Guy's opinion, the secret of success is a good chairman to orchestrate the occasion with light and humorous touch.  The other ingredient is a willingness of the audience to participate by way of reciting some of Burns verse, or by delivering
humorous works of their own.

Here is part of one of Robert Burns' most famous poems:

When chapman billies leave the street,    (chapman billies - peddlars)
And drouthy neibors, neibors, meet;
As market days are wearing late,
And folk begin to tak the gate,
While we sit bousing at the nappy,
An' getting fou and unco happy,
We think na on the lang Scots miles,
The mosses, waters, slaps and stiles,
That lie between us and our hame,
Where sits our sulky, sullen dame,
Gathering her brows like gathering storm,
Nursing her wrath to keep it warm.

Footnote: Please send us your Scottish joke, especially if it's about Burns Night.