Ostensibly, Bonfire Night celebrates the failed attempt by Guy Fawkes to blow up the Houses of Parliament back in 1605.  Realistically, on the 5th of November people forget the history and just enjoy the chance to let off fireworks, have a bonfire, and cook sausages outdoors. 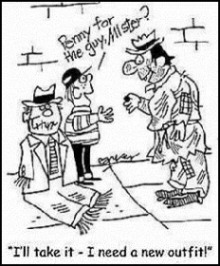 Footnote: If you are looking for more Bonfire night or Guy Fawkes jokes, Will and Guy found it very difficult to unearth any material on this subject.  Thus if you have a good Bonfire night joke, please do send it in and we would be delighted to publish your funny clean material.

A policeman arrested two kids.  One for drinking battery acid, the other was eating fireworks.

He charged one and let the other off!

With firework, usually all you see is spectacular pictures and video footage that seems to go on for hours, however, firework displays don't
always go smoothly.  For example, in August 2009 over 100,000 people assembled in Bournemouth for a "heart-pounding, roaring, glowing, explosive event like no other - the launch of 110,000 fireworks in 60 seconds or less".

What happened was 100,000 rockets were all let off at the same time from a barge just off the shore. People turned to one another said, 'was that it?' or 'what was that?'

The "River of Fire" was supposed to be a spectacular firework display intended to engulf the Thames, however it fizzled out like a damp squib.

Footnote: For a good choice of hotels with discount prices, visit Hotel in London for more information.

With firework display's it's easy to forget that sometimes things go wrong and people get hurt.  What probably happened in this Pittson
accident was that the fireworks went of nearer horizontally than vertically, and injured about 20 people in the crowd.

The mayor said the most serious injuries were suffered by two or three people from the pyrotechnics company. He said two of the three were classified as serious. One suffered burns and smoke inhalation and another suffered a "shrapnel gash to the upper left leg."

Will and Guy wonder why people don't learn from history, or from reading our articles!.  The Oban Community Fireworks only lasted one minute. Due to a technical glitch this 2011 Scottish display resulted in all of the fireworks being detonated simultaneously.  This footage of the display shows a deafening, wild and uncoordinated display.   After the extremely short display, Councillor Roddie McCuish, one of the organisers of the event, apologised to the crowd of hundreds: "I have some terrible news - the fireworks have all gone off at once."   Good news, there is a wonderful video of the fireworks.

Or This Disrespectful Old Poem Favoured by Anti-Papists

A penny loaf to feed the Pope
A farthing o' cheese to choke him.
A pint of beer to rinse it down.
A faggot of sticks to burn him.
Burn him in a tub of tar.
Burn him like a blazing star. 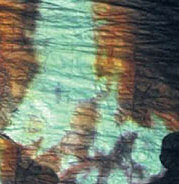 There was a new development for Guy Fawkes celebrations in 2007 - fake bonfires.  The reason is because of the astronomic increase in cost of public liability insurance, which is now required for November 5th celebrations.  Curiously, the problem is the cost of insuring the bonfire and not the firework display.

The Trowsers community group organised a fake bonfire display, which was projected onto a 30 ft by 15 ft screen.  The idea of using a film came after they brainstormed alternatives when insurers refused to cover their bonfire.

But Paul Billing, spokesman for The Trowsers, said: 'Quite a few people came and I think it went down rather well.'  The three-hour film featured a bonfire that Mr Billing filmed in his back garden before the recent concern over public liability insurance, and the unwillingness of companies to provide cover at a reasonable cost.

The fake bonfire was popular with parents of young children who didn't have to worry about their little ones getting too near any real flames.
See more examples of red tape killing fun

Catholics did not come out the Gunpowder plot with much credit, hence Catholic countries tend to celebrate Halloween more than the
5th of November.  James the 1st of England was a Protestant, and even before the Gunpowder plot the Catholics made several attempts to kill him, notably the Bye plot in 1603.

Guy (Guido) Fawkes was the man who was caught red-handed with 36 barrels containing 2,000 lbs of gunpowder.  Under the circumstances, it seems reasonable that he was tried for treason.  However, it was inconceivable that he was acting alone, thus there was a concerted search for his co-conspirators.  Where barbarism enters the picture is in the torture methods those in authority used to gain information, and also the gruesome nature of the sentences; the plotters were, hung, drawn and quartered.  The others involved in
the gunpowder plot have been forgotten, nobody mentions the conspirators Catesby, Wintour, Garnet, Wright, Percy, Bates and Sir Digby, only the hapless Guy Fawkes.
See more on the origins of Bonfire Night.

From the seventeenth century there have been organized celebrations for November the 5th.  However, in recent decades the number of private firework displays seems to have decreased.  In my childhood it was was common for parents to set off a couple of dozen fireworks for their children.  Partly due to safety, partly due to cost, mainly to the quality of the communal displays, nowadays, people prefer to attend a huge public firework spectacular rather than buy their own rockets and Catherine wheels.

For 10 years I was fortunate enough to live just outside Lewes in East Sussex, England.  I do believe that they have the biggest and best November the 5th celebrations in the world.  The highlight (literally) is the procession which takes at least an hour to parade through the main street in Lewes.  What makes this the best November the 5th celebration in the world is the costumes.  Lewes itself has 7 societies dedicated to Bonfire night, also local villages like Kingston and Southease have societies dedicated to making not only costumes but props, slogans and floats for the procession.

Another nice feature is that the other villages, such as Firle, have their own procession but on a different Saturday.  I have attended some of these and about 70% of the Lewes floats turn up in the other villages, thus making a season of Bonfire Night processions.  The biggest problem is not the boisterous crowd of 10,000, but guarding the bonfire so that nobody lights it early.

In October 2008 the Firle Bonfire Society, in East Sussex, ignited a 20ft effigy of Gordon Brown to cheers from revellers. 'We have permission from Downing Street to do this and we are blowing you up, 'was their polite message to the PM.  Burning effigies of prominent
politicians is feature of bonfire societies in general and Firle in particular.  However, Will and Guy think they made up this bit about
'permission from Downing Street' as we could see no reference to form on the No 10 Downing Street website. 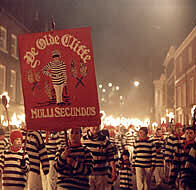 The Cliffe bonfire society refuses to march with the other society in the parade down Lewes high street.  Some say it's because they prefer to drink than than to march, old-times say there was a falling out with other societies a long time ago.  It is also true that the Cliffe society are the most radical, anti-Pope and pro-protestant.

Those of the Cliffe society are also dedicated to remembering the 17 Lewes martyrs who were killed by the Catholic Queen Mary also known as Mary Tudor or 'Bloody Mary'.  Here they are in the photo with their Nulli Secundus (Second to none) motto.

Footnote: It is rumoured that the Lewis, E. Sussex bonfire is to be twinned with the Lerwick Up-Helly-Aa

The Chinese city of Liuyang is hoping to get into the record books by letting off a twelve-and-a-half mile string of firecrackers.

A total of 35 fireworks factories in Liuyang city, Hunan province, have worked together to create the firecrackers. Zeng Mengxiong, the chief technician of the project, told the Changsha Evening News, 'We are doing this to celebrate the upcoming Liuyang International Firecracker
Festival.'

Zeng estimates it will take 85 to 90 minutes for all of the firecrackers to explode:, 'At the beginning and end, the firing speed should be slow, in the middle, really fast,' he added.

The firecrackers will be let off on the opening day of the festival, October 26, when onlookers will be kept back a safe distance. 'We have set up a 10 metre-wide quarantine zone on either side of the string, and will have more than 3,000 guards,' a government spokesman said. 'We aren't worried about rain, since the firecrackers are water-proof.'

Fireworks in one form or another, have been around for at least 2,000 years.  One enduring legend has it that fireworks were invented by a Chinese cook, who was working in an outdoor kitchen.  What happened was he mischievously mixed sulphur and saltpetre with charcoal from his kitchen fire.  Next he compressed the mixture in a bamboo tube, powder exploded and he had the world's first firework.

It has also been hinted that the Indians invented fireworks, however in 2003 an Indian national newspaper (The Hindu) credited the Chinese with inventing firecrackers.

This bonfire celebrations lasts for 5 days in Alicante, Spain, business comes to a standstill.

In our opinion the biggest danger of hosting your own firework display is that you get careless. What tends to happen is that a spark from one firework will accidentally set off all the rest, especially if their lid to their box is open.  If you are having your very own fireworks display on bonfire night, here is a useful checklist.