These PowerPoint slides were photographed in the Gulf of Carpentaria, Northern Australia.  They illustrate the unparalleled beauty of the
Morning Glory Cloud, a phenomenon that occurs between September and November each year.

The underlying cause of these stunning formations is a clash of air masses of different temperatures.

Providing the weather is calm when the sun rises in the Gulf of Carpentaria you can see these beautiful wave-shaped clouds.  They are
at an altitude of about 800km and each wave is about 2km high. Surprisingly the clouds are moving at about 40 km / hr.

This is my favourite slide in the entire presentation,  note the intricate and distinctive pattern by the river and tributaries.  Please have a look at the presentation below to see the full effect.

Wave Formation in the Clouds

If you ever go to Gulf of Carpentaria, Northern Australia, observe how the Morning Clouds are always aligned from east to west.

When the phenomenon occurs, hang gliders and paragliders surf these cloud waves.  However, they have to be careful because the waves produce turbulence.

Monty Kelly, a rich man who lived near Darwin, Northern Territory, Australia decided that he wanted to throw a party.  So he invited his buddies including Darel, the only aborigine in the neighbourhood.

The party was held around the pool in the backyard of Monty's mansion. Everyone was having a good time dancing, eating prawns, oysters and drinking and flirting.

At the height of the party, the host said, 'I have a 16ft man-eating crocodile in my pool and I'll give a million dollars to anyone who has
the balls to jump in.' 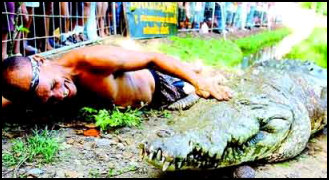 The words were barely out of Monty's mouth when there was a loud splash and everyone turned around and saw Darel in the pool fighting the croc, jabbing the croc in the eyes with his thumbs, throwing punches, doing all kinds of stuff like head butts and choke holds, biting the croc on the tail and flipping the croc through the air like some kind of Judo Instructor.

The water was churning and splashing everywhere. Both Darel and the croc were screaming and raising hell. Finally Darel strangled the croc and let it float to the top like a dead goldfish.

Darel then slowly climbed out of the pool. Everybody was just staring at him in disbelief.  The Monty says, 'Well, Darel, I reckon I owe you a million dollars.' 'Nah, you all right boss, I don't want it,' said Darel.

The rich man said, 'Man, I have to give you something. You won the bet. How about a new car?'

'No thanks. I don't want it,' answered Darel.

The host said, 'Come on, I insist on giving you something. That was amazing. How about a new Rolex watch and some stock options?  Again, Darel said "No."

Confused, the rich man asked, 'Well Darel, then what do you want?

Footnote:
Thanks to Ken Green for sending in this funny Aussie story.

Alternatively, You May Like Our Beautiful Monday PowerPoint Presentation

Making presentations in PowerPoint is satisfying, moreover, it's easy to get started.
The PowerPoint program is intuitive to learn and easy to create your own PPT slides and build them into a slide show.  If you have
Microsoft Office you may find that you already have PowerPoint along with Word and Excel.

One way to begin is simply to open any example presentation.  Just download one of our free PPT files and open it with PowerPoint.  As you examine the slides, so it will become obvious how to add pictures and titles, if you do get stuck, ask the wonderful built-in 'Help'.  To
make an inspirational slide show requires these skills;

Footnote:
Please send us your views on the  World's Happiest Cities.