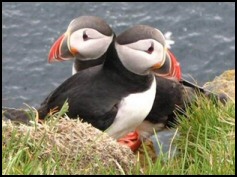 Sailors call him the "clown of the sea", the Atlantic puffin is easily recognisable by it's clown-like eye markings.  Some say it's
colourful beak is the reason for it's alternative nickname: "parrot of the sea."

Where Can You Find Atlantic Puffins?

As the name suggests, these puffins live around the North Atlantic Ocean: I have seen them in Iceland, Scandanavia and around the coasts of Great Brittain.  Their habitat extends accross to the other side of the Atlantic, you can see them down the USA seaboard through Maine as far as North Carolina.

Puffins also thrive in Eastern Canada, indeed this "clown of the sea" is the official bird of the province of Newfoundland and Labrador.

Other Species of Puffin

Our friend the Atlantic puffin has two relatives, the large tufted puffin and the horned puffin (a real "parrot of the sea."). 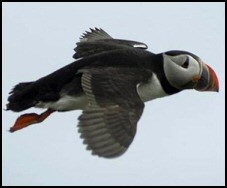 We think one of the funnier aspects of puffins is the noises they make. They are usually silent birds but a groaning, creaking moan with a low, subtly changing pitch can occasionally be heard at nesting or breeding sites.

Puffin on the Menu 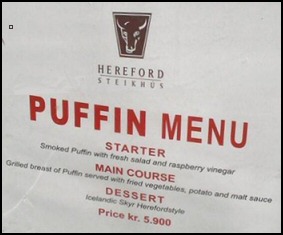 Sadly, the numbers of puffins are decining.  There are probably several factors of which the most important are: depletion of fish
stocks and puffins trapped in fishing nets.

Will and Guy aren't sure if the Icelanders are helping by eating them. To take a charitable view this is a seafaring nation's version of 'road
kill'

There Once Was a Puffin

Oh, there once was a Puffin
Just the shape of a muffin,
And he lived on an island
In the bright blue sea!

But this poor little Puffin,
He couldn't play nothin',
For he hadn't anybody
To play with at all.

So he sat on his island,
And he cried for awhile, and
He felt very lonely,
And he felt very small.

Then along came the fishes,
And they said, "If you wishes,
You can have us for playmates,
Instead of for tea!"

So they now play together,
In all sorts of weather,
And the Puffin eats pancakes,
Like you and like me.

Footnote: Please send us your puffin stories and pictures.