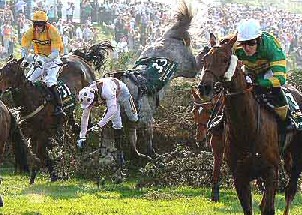 Just as The Queen, The Derby, or indeed London, needs no qualifier, so 'The
Grand National' needs no soubriquet.  However, just in case there is
doubt, I can clarify that The Grand National steeplechase is run at Aintree,
which is just outside Liverpool in England.

Amazingly, the winner of the very first Grand National, back in 1829, was a horse called Lottery.  When I first
heard this fact, I naively thought that this horse subsequently gave its name to the form of gambling, which we know as a lottery.  However, the power of the internet reveals that the word lottery
originates from French and Dutch roots back in
the 15th century.

Betting on The Grand National

The Grand National is ideally suited to a sweepstake, you are guaranteed over 30 runners, with no short priced favourite.  Also, unlike the flat racing classics, the Grand National
is for older horses, many of whom are already well known to the public.  This all adds to the interest in an office sweepstake, and a flutter on the big race.

Our advice is that if you do have a bet on the Grand National, always back
on the nose (win only).  Prefer long shots, because in the unlikely
event that your horse wins, at least you win big.  Another suggestion
is that if you do draw a horse in the office sweepstakes, then also back the
horse with the bookmaker.  At all costs avoid the fate of our friend
'Mad' Mick who won £3.50 on the office sweepstake, but then had to buy a
round of drinks that cost £75, just because 'luckily' he drew the winner of
the Grand National in the sweep.

Recent form
figures are of little use over this marathon course.  Most horses are trained specifically for the Grand National, yet they are given preparation races over
much shorter distances, thus their form figures are poor and irrelevant.  The main factor that makes this such a difficult race to win is the Aintree fences; they are higher, wider and there are more of them than for races on other courses.

Out of the horse's mouth:
Horse sense is the thing a horse has which keeps it from betting on people.
WC Fields

On the trip to Aintree racecourse he told Barry that he had flown over
from Hong Kong to back one of the horses he owned in the big race that day.
The horse's trainer had told him that this was "the really big one" and he
was positive the horse would win the Grand National Steeplechase at a hefty
price.

Barry, being an obsessive gambler, couldn't wait for the businessman to
tell him the name of his runner.

After he had paid the fare, Barry was slipped a note with the horses
name:  搞笑清洁笑话

Colin was sitting quietly reading his paper when Pam, his wife, walked up
behind him and whacked him on the head with a magazine.

'What was that for?' he asked.

'That was for the piece of paper I found in your trouser pocket with the
name Molly May written on it,' Pam replied.

'You remember two weeks ago when I went to the races? Molly May was the
name of one of the horses I bet on,' Colin explained.

'Oh darling, I'm sorry,' she said. 'I should have known there was a good
explanation.'

Three days later Colin was watching TV when Pam walked up behind him and
hit him on the head again, this time with a frying pan, knocking him out
cold.

When he came to, he asked, 'What was that for?'

As so often, the 2010 race provided a very emotional scenes.  His
jockey Tony McCoy finally won this great race on this 15th attempt.  The Winner, 'Don't Push It' was trained by Jonjo O'Neill trained and owned
by the legendary Irish racing enthusiast JP McManus. 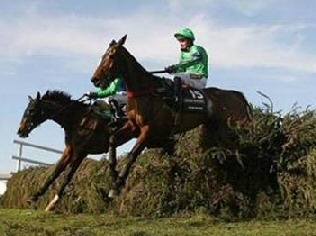 A marvellous story has surfaced since the 100-1 outsider, Mon Mome won
Aintree's premier race, the Grand National, in April 2009.

Terminally ill Danny Shea, who
suffered from kidney cancer, persuaded his wife to put £250 on 100-1
outsider Mon Mome, Will and Guy have learned. She thought it was a waste of
money but humoured him by placing the bet and collected £20,310 winnings.

Widow Pat, 63, added, 'We could not believe it. He was generally pretty
useless at picking winners, but he liked to put a bet on.' Danny, who died
five months ago, had a feeling the nine-year-old would triumph after seeing
it come 10th last year. Pat, who has visited Danny's grave to thank him for
the tip, told reporters that, 'He was adamant it would be a winner if there
was soft ground.'

The family watched the race together over a pub meal. Pat concluded, 'We
were all crying and the young lads in the bar must have thought we were
mad.'

What a lovely end to the story.

The winner was 'Comply or Die', one wag said: 'Is that the name of the
Aintree winner, or and edict to President Mugabe?'

Bets that everyone loves - especially bookies - are co-incidence bets, here are a rash of stories from the 2007 running of the Grand National.

The Irish-bred outsider escaped the attention of most gamblers, but the pub in Birchwood, Cheshire was home to some 21 winners.
Landlady Janette Kelly, 42, who won almost £45, said one female regular took home £800 while a barman won another £200, but the £50,000 big winner was keeping quiet. Kelly said, 'Nobody got all the drinks in
after the race - but the atmosphere in the pub was amazing.'

They weren't the only pub toasting success as bets piled in from Silver Birch boozers in Cowdenbeath, Scotland; Manchester and Bracknell,
Berkshire. Residents and staff at the Silver Birches OAP home in Birmingham also won.

What newspapers never publish are an equal, or greater, number of losing bets on other horses with catchy names.  In 2007 these horses
with enticing names ran in the Grand
National, but lost, I wonder how many bets they attracted?  Simon, Joe's Edge, PhilSon Run and Jack High.

On the 23rd of February 2008, Fred Craggs from Thirsk in Yorkshire, UK landed
an amazing bet, his eight horse accumulator won at odds of 2 million to 1.
Fred is the first person to win a million pounds in a betting shop in the UK.
Astonishingly, he only bet 50p [$1].  The first horse to win was called:

The horse which completed the eight horse accumulator was called:

Will and Guy could not make it up.

Picture this, about six of us were gathered in the pub one Friday evening.  'Top Cat' our racing expert gave us a hot tip
for Red Herring in the 3:00 at Sandown Park.  'It's sure to
win, so have a good bet tomorrow', TC said.  Well, Saturday arrived but it was not Red Herring's day.  Despite leading most of the way he hit the last fence hard, and was beaten in to second place on the run to the line.  We bet
on Red Herring only to win,
consequently we lost our money.

I say we all lost our money, but not so Dave.  He was not paying full attention when TC gave us the tip, consequently, when Dave looked down the list of
Saturday's runners, and spotted one called Purple Kipper, it fired a vague memory of TC's
tip.  The upshot was Dave went out and bet £20 on Purple Kipper to win.

Now on Saturdays there a multiple race meetings; Purple Kipper ran,
and duly won the 3:30 at Stratford, whereas Red Herring came 2nd in the 3:00 at Sandown.  What made the story even more remarkable was that Red Herring's odds were 3/1 whereas Purple Kippers were 25/1.

Patrick, a gambler, is at the bookies and goes to the TV screens and
checks the prices of the next race at Aintree on Grand National day. There
are only two horses in the race and it seems pretty uncompetitive as the
favourite is 10 to 1 on and the other is priced at 40 to 1 against.
Nonetheless, Patrick makes his way to the counter and asks to place £250 on
the outsider.

Being a friendly sort, the bookmaker tries to put him off the bet and
assures the customer that the outsider has absolutely no chance against the
favourite but Patrick is insistent and demands that the bet be placed. The
bookmaker tries again to convince Pat he'd be losing his money but
eventually agrees to take the bet and gleefully deposits the £250 into his
till.

They both then watch the race on the television and, horror of horrors,
the favourite falls at the ninth hurdle and the outsider casually trots to
the finishing line.

Patrick is straight back to the counter and demanding his winnings.

'No problem,' says the bookmaker, 'I will happily pay you what you have
won,' and he counts out the £10,250. As he does so, he confides to Patrick,
'You are amazingly lucky - between you and me, I actually own the outsider
that you bet on and he is such a donkey, even I didn't back it.'

As he collects his winnings and makes his way to the door, "lucky"
Patrick replies, 'That's a coincidence, I own the favourite.'

There were wild scenes of celebration at the Cheltenham National Hunt
Racing Festival last week, Will and Guy can confirm, with two young men
going ballistic after Riverside Theatre won the Ryanair Chase.

While it's not uncommon for stable lads to be overjoyed when their horses
win at the Festival, it appears that one of these boys had a very big reason
to celebrate the horse's success on Thursday considering Riverside Theatre's
win made him a millionaire.

All the horses won their races, crediting the overjoyed stable lad with a
one million pound pay-out. Brilliant we say and good luck to him!

One day, the Clerk of the Course spots a trainer giving something to a
horse just before the start of a race. He goes over and says, 'Doping?'

The Clerk of the Course murmurs, 'Sorry, but we have to be careful. As a
matter of fact, I like a bit of sugar myself.' So the trainer gives him a
lump.

When the Clerk of the Course disappears, the trainer gives his jockey his
last minute instructions, 'Don't forget the drill. Hold him in 'til the last
four furlongs. Don't worry if anything passes you, it'll only be me or the
Clerk of the Course!'

The 7th race at Monmouth Park featured two horses, 'Mywifenosevrything'
and 'Thewifedoesntknow'.  In one of those amazing betting coincidences
they finished first and second, and it was left to race course announcer
Larry Collmus to sort out the hiatus of how 'My Wife Knows Everything', beat
off 'The Wife Doesn't Know'.

At one time the Telegraph provided a

uTube link to this amazing race.

Footnote:
Please send us your example of Grand
National Humour or racing stories.