It would be a shame if 'Political correctness' prevented people telling the best of 'Irish Jokes'.

Apparently there is something deep in the human psyche about telling such 'Irish' jokes.  Every culture tells similar stories, they just change the names.  For example in Ireland itself, they may retell the jokes substituting Kerry men for Irish.  And in County Kerry they would substitute 'West Kerry men' for Irish.Best Irish Jokes

10 of the Best Short, Funny and Hilarious Irish Jokes To Be Sure:

A passer-by watched two Irishmen in a park. One was digging holes and the other was immediately filling them in again.

'Tell me', said the passer-by, 'What on earth are you doing?' 'Well', said the digger, 'Usually there are three of us. I dig, Fergal plants the tree and Sean fills in the hole.  Today Fergal is away unwell, but that doesn't mean Sean and I have to take the day off, does it?'
The Irish attempt on Mount Everest was a valiant effort, but it failed: They ran out of scaffolding.

How Many Ducks? - Funny Irish Logic

'What's in the bag?' asked Paddy 'I'm not going to tell', replied Murphy 'Go on, do.' pleaded Paddy. 'Ah, all right then, it's ducks.' announced Murphy 'If I guess how many ducks you have in the bag, will you give me one of them?' enquired Paddy 'Look', said Murphy, 'If you guess the correct number, I'll give you both of them.' 'Five!' said Paddy triumphantly. 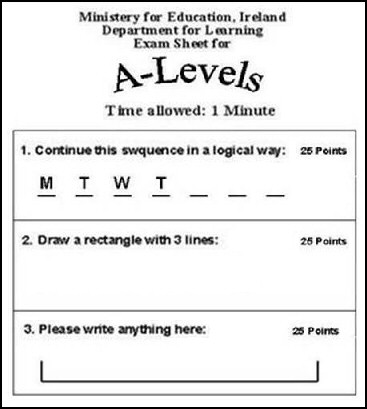 The Defining Quality of the Best Irish Jokes

What set's Irish jokes apart is their special logic.  Indeed, it is this ability to use words with multiple meanings that is the essence of jokes. Here are three examples of playing with phrases which have more than one meaning.

Two Irishmen hired an open cockpit aeroplane to fly over Dublin on St Patrick's Day. As they were winging their way through the air, O'Toole turned to his friend, Murphy and said, 'Murphy, I'm going to fly upside down.' 'Begorrah, O'Toole', shouted Murphy,' don't do that, we'll fall out.' 'No we won't,' responded O'Toole, 'I'll still talk to you.'

10 More of Will and Guy's Best Irish Jokes

These short jokes capture the best of Irish humour.  They are even funnier if you read them out loud, or better still, tell them to friend in a thick Irish brogue. Footnote: Please send us your best Irish Jokes
• Funniest Irish jokes