Examples of mistakes made by Jerry builders and other 'professional' workmen.
Incidentally, the term Jerry Built dates back to the 19th century.  The
original meaning was defective, made from makeshift materials.

Look closely at these replacement windows which are to be found, supposedly,
in Russia.

Example of a Jerry Builder with a Squint

I've been charged with murder for killing a man with sandpaper. To be
honest I only intended to rough him up a bit.

A classic bodge job.  Note the chair, a give-away that this room is
actually in use

A New Development
Designed by
Jobsworths, Built by Jerry Builders

Each of these errors would be hard to believe except we have the
photographs. Will and Guy are amazed that the builders did not question
their plans.

We Give This Jerry builder 8/10 for Plastering, But 0/10 for Planning. 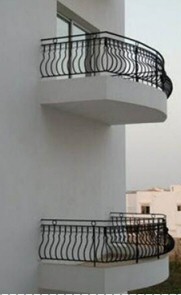 Jerry Builder Cashing Out, or Cashing In? 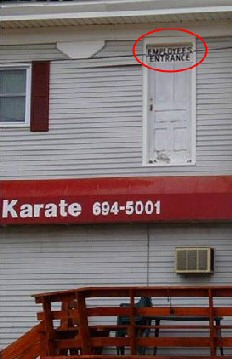 How much money do I want?
How much do I want money!

Why does a
Jerry
builder have a transparent
lunchbox?

So that he can tell if he is going to work or coming home.

These cubic houses came about from a design by Piet Blom in Rotterdam,
Netherlands.  The concept is of a a forest, thus to get the full effect you
need to view a street of these cubic houses.  (See photograph to the right)

Meanwhile, Back with the Jerry Builders

A Do-it-Yourself [DIY] enthusiast, from the UK, has been banned by his wife
from taking on any more tasks after causing thousands of pounds worth of damage
reports the Daily Telegraph newspaper.

Christopher Andrews, 21, a pensions administrator, has left a trail of
destruction in their two-bedroom terrace house in Wiltshire, south-west England.
While trying to change a washer on a tap, he went up into the loft to look for
the stop-crock and disconnected two pipes, flooding the house. He later returned
to the loft to look for the television aerial and crashed through the room's ceiling,
showering plaster on his wife who was ironing.

When he wanted to lay a carpet in the bedroom, he knocked out the light
bringing the roll of material into the house. He cut a large hole in the carpet
rather than move the bed. Andrews once blacked both his eyes when a wheel brace
slipped as he tried to change a punctured tyre on the couple's car. 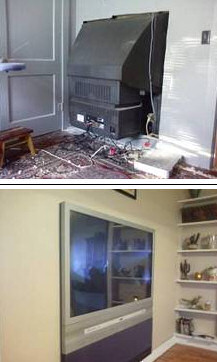 Mr Mr Andrews ruined a kitchen work surface by trimming off so much of it to
make it fit that it ended up far too small.

In his hands the electric drill becomes a dangerous weapon. He cut his leg
badly when he dropped the drill as he tried to re-hang a broken garden gate.
Then, while trying to put up a coat rack in the hall, he drilled through an
electric cable sending out sparks that set fire to the curtains.

This made him more safety conscious; so when he decided to put some speakers
on the walls he turned off the electricity. Then, unable to understand why his
electric drill had stopped working, he took it apart to see if he could fix the
fault. Having failed to find anything wrong with it, he tried to put it back
together again but by then he had forgotten where all the pieces went. He went
out and bought another drill and was about to take it back because it didn't
work when his wife arrived home and reminded him that he had turned off the
electricity.

Mrs Andrews, a job training manager, said she had had enough, 'Chris will
have a go at absolutely anything,' she commented. 'But in his case DIY stands
for Dangerously Incompetent Yob'.

It is entirely possible, think Will and Guy, that Mr Andrews may have been
responsible for fitting this television in his home.

A family bought a house and made plans for interior decorations. They
decided to wallpaper the walls.

"The neighbors' house is the same size as ours," the wife said to the
husband, "and they wallpapered their walls. Go over there and ask them how
many rolls of wallpaper they bought."

The husband went next door, returned and reported, "They bought 12
rolls." So the husband and wife went to the store and also bought 12 rolls
along with some other supplies. Later that day they began the job of
wallpapering.

When they finished, they still had 4 rolls left.

Looking at the leftover rolls, the husband said, "I'm going next door and
ask the neighbors about this." He went next door.

"You said you bought 12 rolls of wallpaper to paper your walls," the
husband said when his neighbor answered the door.

"We did buy 12 rolls," the neighbor replied.

"Yeah," the neighbor replied, "We still have 4 rolls left too!"

Footnote:
Please send us your funny pictures of jerry builders.