Indian English comprises several dialects of English spoken primarily in the Indian subcontinent.  These
dialects arose during the colonial rule of Britain in India and provide a
rich seam of Inglish jokes.

Will and Guy would like to share with our readers some examples of this
"type of English speak."  We do not do this to poke fun at
our Indian friends, although some expressions do bring a smile to our lips.

Inglish Heard After an
English Exam 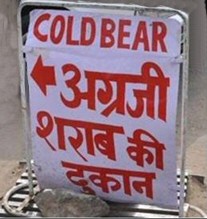 Devyani; Hey, I wanted to confirm one of my answers. Can you help

Anil: Sure, which one was it?

Devyani: Well, we were supposed to add a suitable preposition in the
blank. The question was, 'Bear ____ me for a while.'

Naturally, the answer was "Bear with me for a while." This means that the
speaker requests the person to be patient for a while.

Devyani, however, changed the meaning completely with her answer by
writing: "Bear chased me for a while."

Ingrish Heard In the Office

Once, my colleague, Hasan, wanted to inform our Director that his mother
was seriously ill and that he needed a few days of leave. His application
reads as follows:

Wrong Inglish: My mother is very dangerous and I want to
saw her. Please leave me three days.

The mother is not dangerous. She's very ill. Also, he doesn't want to saw
her, which sounds gruesome. Instead he wants to "see her", or better still,
"be by her side". Finally, he is requesting leave; he doesn't want the boss
to actually leave him for three days.

Correct English: My mother is seriously ill and I would
like to be by her side. Therefore, I request you grant me leave for three
days.

More examples of Inlish or Ingrish which you may hear in India or Sri Lanka.

Correct: Please take this letter and post it yourself.

Correct: The food at Udupi Hotel is not good.

Inlish Heard In the Park

Another funny incident happened to Vivendra who was walking in a park
with his cousin, Farah.

Vivendra: Wow, what a peaceful atmosphere. It's so calm.
Farah: Yes,
this calamity is very nice.

Calamity refers to a disaster or a tragedy.  Farah answer mean
something completely different to what she meant.

Compiled by Will with the help of Dr Roopa Nishi Viswanathan

At the other end of the speech spectrum these Inglish, or Ingrish funnies arise from
shortening English words.

Raj and the Wedding

Raj and Jeeto were preparing wedding cards for their daughter at the
printers.

Jeeto was not very good at English so she asked the printer to
help her. After the printer had presented her with a draft, she
quickly pointed out that the "RSVP " was missing.

The printer was surprised by Jeeto's knowledge and asked her if
she knew what it meant.

Jeeto started to think and after much thought he replied, 'Vait!
I remember. I remember - RSVP.  It means "Remember, Send Vedding
Present."'

'Entry From Backside Only', is a funny Ingrish sign that refers to a phrase commonly used on signposts
in India to indicate the rear entrance of a building.

Dear sir, with reference to your above, see my below - popular opening
line in official letters.

Perhaps the most endearing aspect of Indian English is the way it has
preserved forms now regarded as highly old-fashioned in Britain. Addresses
such as "Good sir" and questions like "May I know your good name?" are
commonplace, as are terms like "tiffin" and "cantonment".

Let us start with Inglish humor by examining the practice in Mumbai of adding -fy to a Hindi word
to indicate that an action is being done to someone by someone.  From the
Hindi word muska, to muskafy means to flatter somebody or to butter them up.
Similarly, to pataofy is the action of wooing someone.

The Origin of Inglish Jokes

English has been with India since the early 1600's, when the East India
Company started trading and English missionaries first began their efforts.

The English which is spoken in India is different from that spoken in
other regions of the world, and it is regarded as the unique variety which
is called Indian English or Inglish.

Enthusiasm is called enthu; as such, it can be used in new ways. One can
say, 'That guy has a lot of enthu.' While this is simply an abbreviation,
enthu can also be used as an adjective where enthusiasm cannot, as in 'He's
a real enthu guy.'

The same applies for fundamentals, which is shortened as fundas. 'She
knows her fundas.' What is interesting about fundas is that when the -as
ending is dropped and -u is added, it takes on a new meaning and can be used
in a new way. Fundu basically means wonderful or brilliant. One can say 'He
is a fundu person' or even 'He is fundu.'

Santa goes into a bar in New York.

Ten
Funny Reasons Why English and Inglish are so Difficult

English is one of the official languages of India, with about ninety
million speakers according to the 1991 Census.

Fewer than a quarter of a million people speak English as their first
language. With the exception of some families who communicate primarily in
English, as well as members of the relatively small Anglo-Indian community
numbering less than half a million, speakers of Indian English use it as a
second or third language, after their respective Indian language(s).

Several idiomatic forms, derived from Indian literary and vernacular
language, also have made their way into Indian English. Despite this
diversity, there is general homogeneity in syntax and vocabulary among the
varieties of Indian English.