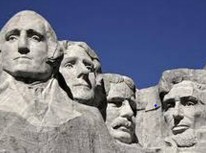 The third Monday in February is when America celebrates Presidents' Day.

'This telephone is an amazing invention but who would want to use one of
them?'  American President, Rutherford Hayes 1876.

When Will Rogers was being taken to the White House to meet President
Calvin Coolidge, Vice President Dawes cautioned him not to try to be funny
because the President had no sense of humour whatsoever.

Undaunted, Rogers bet Dawes that he could have Coolidge laughing within
20 seconds.

When the formal introduction was made, Dawes began by saying, 'Mr.
President, may I introduce my friend, Mr Will Rogers.'

Rogers held out his hand with a questioning look and said, 'Pardon me, I
didn't quite get the name.'

Coolidge roared with laughter, and Rogers won the wager.

Will and Guy would
like to thank the Guardian newspaper and BBC online for help in
compiling this list of funny Bush moments.

'You should be ashamed,' the father told his son, Andy, 'When Abraham
Lincoln was your age, he used to walk ten miles every day to get to school.'

'Really?' Andy responded. 'Well, when he was your age, he was president.'

Presidents day was formerly known as Washington Day.  The observance
of Presidents' Day on the Third Monday of February is reminiscent of the
Indian fable of the 6 blind men
and the elephant in the sense that the holiday seems to mean something
different to everybody you meet.

How the
Reagan Administration Changed a Light Bulb

How many members of the Reagan administration did it take to change a light
bulb?