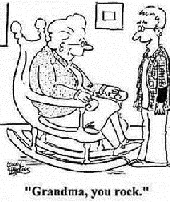 Between the earth and sky above,
nothing can match a grandmother's
love.

What Is a Grandparent?
Will and Guy
Bring You Funny, But Real, Answers

Will and Guy's friend, Mrs Margaret Mather is a Primary school teacher;
she has recorded the answers she was given in a class discussion, they could
make you smile or even laugh:

Good morning. . . . At present we are not at home but, please leave your
message after you hear the beep. Beeeeeppp ...

If you are going to invite us to dinner, or, take us to a restaurant,
start talking - we are listening!

One evening a grandmother was babysitting her two granddaughters Anne and
Betty. Presently, 8:00 PM rolled around.

"Why not?" the grandmother asked.

Betty answered, "Because you're his mother!"

Little Ben came into the house with a new harmonica. 'Grandpa, do you
mind if I play this in here?'

'Of course not, Ben. I love music. In fact, when your Grandma and I were
young, music saved my life.'

'Well, it was during the famous Johnstown flood. The dam broke, and when
the water hit our house, it knocked it right off the foundation. Grandma got
on the dining room table and floated out safely.'

'Me? I accompanied her on the piano!'

Grandparents Day - How Did It Start?

We have Jimmy Carter to thank for creating Grandparents Day on the first
Sunday after Labor Day.

Grandfather in The Ark?

My sister's
eldest boy liked nothing better than to sit on his grandfather's
knee and have stories read to him.  One day after a
story about Noah's
ark, and how Noah led pairs of animals to the safety of the ark.

The little boy asked, 'Granddad, you are very old, were you in Noah's
ark?'
Gosh no', said Granddad.' In that case, how come you didn't
drown when the flood came?'

The people who think your children are wonderful even though they're sure
you're not raising them right.

When my grandmother got arthritis, she couldn't bend over and paint her
toe nails anymore. So my grandfather does it for her all the time, even when
his hands got arthritis too.  That's love.

James, a young boy of 6, turned to his Grandfather and says, 'When you
die, Grampy, I don't want your money.  Please will you leave me your
memory.'

[As told to Will by George, an old and valued friend who has a monumental
memory]

My grandfather has recently started a course called 'Computers for the
Terrified.' He's nearly eighty and, although used to be an engineer within
the US Air Force, he is completely stuck when it comes to computers.

He came back from his first evening at this course. When asked how it had
gone, he replied, 'Yes, it was really good. I really enjoyed it, but I
really couldn't get to grips with my mole.'

I stopped for a second, completely puzzled, until I realised he was
talking about the mouse.

You've got to do your own growing, no matter how tall your grandfather
was.

One day, young Sarah girl was watching her mother make a roast sirloin of
beef. She cut off the ends, wrapped it in string, seasoned it and set it in
the roasting dish.

Sarah politely asked her mum why she cut off the ends of the roast. Mum
replied, after some thought, that it was the way that her mother had done
it.

That night grandma came to dinner and Sarah and her mother asked why she
had cut the end off of the roast before cooking. After some thought grandma
replied, she cooked the meat the way her mother had done it.

Now great-grandma was quite old and lived in a residential nursing home,
so Sarah, her mum and grandma went to visit her and again asked the very
same question.

Great-grandma looked at them a bit surprised and said, 'So it would fit
in the roasting dish, of course.'

A Hilarious Tale To Make You Laugh

Grandma Quinn is eighty-eight years old and still drives her own car. Her
granddaughter Jacqueline Pearson, who lives in Boston, Massachusetts, USA,
sent Will and Guy this letter and asked that it be put on the site.

We have to admit, this story had Will laughing out loud.

The other day I went up to our local Christian book store and saw a 'Honk
if you love Jesus ' bumper sticker. I was feeling particularly sassy that
day because I had just come from a thrilling choir performance, followed by
a thunderous prayer meeting.

So, I bought the sticker and put it on my bumper.

Boy, am I glad I did; what an uplifting experience that followed.

I was stopped at a red light at a busy intersection, just lost in thought
about the Lord and how good he is, and I didn't notice that the light had
changed.

It is a good thing someone else loves Jesus because if he hadn't honked,
I'd never have noticed. I found that lots of people love Jesus!  While
I was sitting there, the guy behind started honking like crazy, and then he
leaned out of his window and screamed, 'For the love of God!' 'Go! Go! Go!
Jesus Christ, GO!'

What an exuberant cheerleader he was for Jesus! Everyone started honking!
I just leaned out my window and started waving and smiling at all those
loving people. I even honked my horn a few times to share in the love!

There must have been a man from Florida back there because I heard him
yelling something about a sunny beach. I saw another guy waving in a funny
way with only his middle finger stuck up in the air. I asked my young
teenage grandson in the back seat what that meant. He said it was probably a
Hawaiian good luck sign or something.

Well, I have never met anyone from Hawaii, so I leaned out the window and
gave him the good luck sign right back.

My grandson burst out laughing. Why even he was enjoying this religious
experience!

A couple of the people were so caught up in the joy of the moment that
they got out of their cars and started walking towards me. I bet they wanted
to pray or ask what church I attended, but this is when I noticed the light
had changed. So, grinning, I waved at all my brothers and sisters, and drove
on through the intersection.

I noticed that I was the only car that got through the intersection
before the light changed again and felt kind of sad that I had to leave them
after all the love we had shared.

So I slowed the car down, leaned out the window and gave them all the
Hawaiian good luck sign one last time as I drove away. Praise the Lord for
such wonderful folks!

What Is A Grandma?

Dear grandma
you're all alone
no one by your side
grandpa has
left you
leaving his loved one behind
your feeling isolated
sometimes agitated
please be strong
bcoz allah will be on your side
you're in my tahujjed prayers
pray 4 u that allah gives u health and make
u strong and pious
and gives u patients
but most of all grant u
longlife, peace and happiness
insallah

How Old Is Grandma?

Stay with this -- the answer is at the end.  It will blow
you away.

One evening a grandson was talking to his grandmother about current events. The grandson asked his grandmother what she thought about the shootings at schools, the computer age, and just things in
general.

The Grandma replied, 'Well, let me think a minute, I was born before:

Man had not invented:

Your Grandfather and I got married first, . . and then lived together!  Every family had a father and a mother! Until I was 25, I called every man
older than me, 'Sir'.  And after I turned 25, I still called policemen and every man with a title, 'Sir.'

We were before gay-rights, computer- dating, dual careers, day-care centers, and group therapy.

Our lives were governed by the Ten Commandments, good judgment, and common sense!  We were taught to know the difference between right and wrong and to stand up and take responsibility for our actions.
Serving your country was a privilege; living in this country was a bigger privilege. We thought fast food was what people ate during Lent!

Having a meaningful relationship meant getting along with your
cousins!

Draft dodgers were people who closed their front doors when the evening breeze started!

Time-sharing meant time the family spent together in the evenings and weekends-not purchasing condominiums.

I bet you have this old lady in mind...you are in for a shock!

Footnote:
Please send us your jokes grandparents and funny stories.