On Groundhog Day, what does it mean if Punxsutawney Phil comes out and sees the village idiot? Within 6 weeks you'll have a village full of idiots!

Over breakfast one morning, a woman said to her husband, 'I bet you don't know what day this is?' 'Of course I do,' he answered indignantly, as he slammed the door, and drove to his office. At 11 o'clock, the doorbell rang.  The wife answered, and there at her front door was a UPS driver, in his had was a box containing 12 red roses. Later, at 2 pm there was another knock at the door, this time it was a deluxe box of Belgian chocolates. Eventually the husband came home, tired after a hard day's work.  His wife greeted him by saying: 'First the flowers, then the chocolates, I've never had a more wonderful Groundhog Day in my life!'
Arizona Abner Punxsutawney Phil's cousin, Arizona Abner, was buried alive under a K-Mart parking lot, reports The Furious Bandercoot.  Consequently, seven years of summers are expected for the whole state of Arizona.

Will and Guy's Fun Facts and Interesting Trivia About Groundhogs 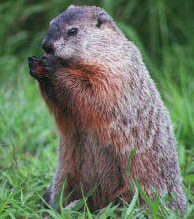 Sayings for Candlemas and Groundhog Day

'For as the sun shines on Candlemas Day, so far will the snow swirl in May...' If Candlemas be fair and bright, Winter has another flight. If Candlemas brings clouds and rain, Winter will not come again. Archive: One of Punxsutawney Phil's earlier Forecasts : On Gobbler's Knob I see no shadow today. I predict that early spring is on the way According to legend, if Punxsutawney Phil sees his shadow, there will be six more weeks of winter weather. If he does not see his shadow, there will be an early spring. If the sun shines on Groundhog Day; Halve the fuel and halve the hay. The 2007 forecast broke seven year streak where Phil saw his shadow on Groundhog Day. 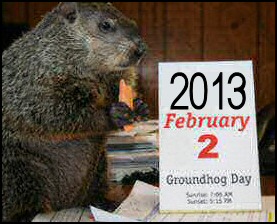 Punxsutawney Phil Says Spring Will Come Early "Phil surveyed his surroundings and found no shadow, so an early spring it will be!" claims Groundhog.org. Phil's prediction is based on whether or not he can see his shadow.  Local residents thinking is thus, shadow = sun = cold wintry conditions for another 6 weeks.  Cloudy, no shadow = milder conditions, thus spring is on the way.

What happens in Punxsutawney, Pennsylvania USA is that the behaviour of a Phil the Groundhog determines if spring is just around the corner, or if the weather will take a turn for the worse.  The action takes place at about 7:30 in the morning of 2nd February at Gobbler's Knob, just outside Punxsutawney PA.
On Tuesday February 2nd 2010 Punxsutawney Phil DID see his shadow, thus it was a bright sunny morning, consequently we are in for 6 more weeks of cold wintry weather.

In 2009 Punxsutawney Phil saw his shadow on Groundhog Day.  Thus we are in for at least another 6 weeks of winter.  A feature of this year's audience were at least 5,000 Pittsburgh Steelers fans fresh from celebrating their victory in Super Bowl 43.

Punxsutawney Phil saw his shadow shortly before 7:30 a.m. local time. The crowd of 35,000 people cheered as William Cooper read a scroll containing the groundhog's prediction. 'As I look around me, a bright sky I see, and a shadow beside me. Six more weeks of winter it will be.

The legend of Groundhog Day is based on an old saying: 'If Candlemas Day is bright and clear, there'll be two winters in the year.' The great, great, great, great grandfather of Punxsutawney Phil first made his prediction in 1887.  Today's Phil weights in at about 1 stone (14lbs).  Whereas his wild groundhog (woodchuck) cousins eat grass with the occasional treat of a dandelion or clover; Punxsutawney Phil is pampered with ice cream and dog food. On the big day - February the 2nd, Phil is taken to special heated burrow underneath the artificial tree stump Gobbler's Knob.  After he performs his duty of checking his shadow, Phil is taken to his home in the Punxsutawney Library.

The Origins of Groundhog Day 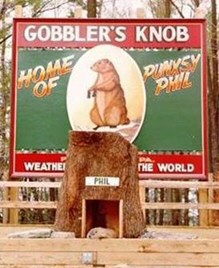 Groundhog Day may be associated strongly with the 1993 Bill Murray film (see below), but its origins lie with German settlers in the 18th century. The name Punxsutawney, the town in Pennsylvania where the groundhog ceremony takes place every year, comes from the Indian name for the location "ponksad-uteney", which means "the town of the sand flies". We have found that when German settlers arrived in the 1700s, they brought the celebration of Candlemas with them. German tradition holds that if the sun comes out on Candlemas, the hedgehog will see its shadow and six more weeks of winter will follow. If no shadow is seen, legend says spring will come early. The German settles in Pennsylvania continued the tradition but used a *groundhog rather than a hedgehog. *The groundhog, also known as a woodchuck [Marmota monax], is a member of the squirrel family. Groundhogs in the wild eat succulent green plants, such as dandelion, clover, and grasses. The first official Groundhog day was on February 2nd, 1887, at Gobbler's Knob, about 65 miles northeast of Pittsburgh, although its first reference can be found in 1841. Today it is celebrated in the USA and Canada, with the most popular ceremony in Punxsutawney, although there are several others across both countries. Crowds in Punxsutawney can be as large as 40,000, and have increased in popularity since the Bill Murray film. Punxsutawney Phil, the world's most famous groundhog, has seen his shadow nearly 100 times, has not seen it 15 times, and nine years are unaccounted for; Will and Guy feel it should be noted that he only has an accuracy rating of some 39%. See more on Groundhog Day.

The 1993 Groundhog film developed the original idea of repeating the same day over and over again, but with different endings. Bill Murray stars as the weatherman Phil Connors who relives reporting on February 2nd - Groundhog Day at Gobbler's Knob, Punxsutawney PA.  Andie MacDowell co-stars as Rita his production assistant, who helps transform Phil's character. 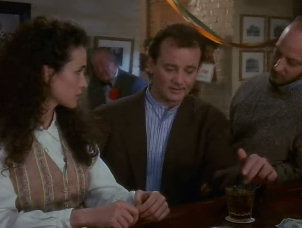 What makes the film an above average comedy is the way Bill's character transforms from a grouch, grumpy inadequate, into a rounded empathetic character who lives life to the full. Since the Groundhog Day film, the saying has taken off, it was though the phenomenon of events repeating themselves was crying out for a catch phrase - Groundhog Day. Footnote: Please send us your Groundhog day jokes, sayings and stories.