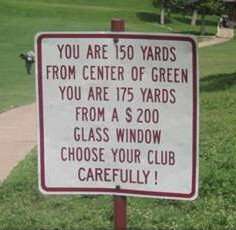 While sitting at a table in the clubhouse after a game, Padraig remarked to a fellow club member', I'm not going to play golf with Jim Lawler anymore. He cheats.'

'Why do you say that?' asked his friend. 'Well, he found his lost ball two feet from the green', replied Padraig indignantly. 'That's entirely possible', commented his friend. 'Not when I had his golf ball in my pocket', retorted Padraig with finality.

Alex comes home after his regular Saturday golf game and his wife, Amanda asks why he doesn't include John Gumby in the games anymore. Alex asks, 'Would you want to play with a guy who regularly cheats, swears outrageously over everything, lies about his score, and has nothing good to say about anyone else on the course?' 'Of course I wouldn't,' states Amanda. 'Well,' mutters Alex, 'neither does John Gumby.' 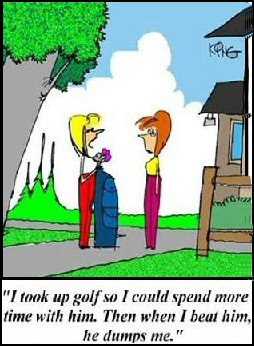 'That would be too much of a coincidence, sir', answered the caddy in a quiet voice.

A young man and a priest are playing golf together. At a short par 3 the priest asks, 'What are you going to use on this hole, my son?' The young man says, 'An iron, father. How about you?'

After a particularly bad round of golf, Robert decided not to go to the nineteenth hole [the clubhouse bar] and started to go straight home. As he was walking to the golf car park to get his Range Rover, a policeman stopped him and asked', Did you tee off on the seventeenth hole about twenty minutes ago?' 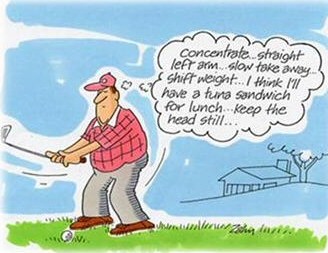 'Yes', Robert answered 'Did you happen to slice your ball so that it went over the trees and out of bounds and completely off the golf course?' 'Yes, I did. How did you know?' Robert questioned. 'Well', said the policeman gravely', Your golf ball flew out onto the main road and crashed through the windscreen of a BMW. The car driver lost control and crashed into six other cars and a fire engine. The fire engine was unable to reach the fire in time and the building burned down. Now, what do you intend to do about it?' Robert thought it over very carefully and responded', I think I'll close my stance a little bit, tighten my grip and lower my right thumb.'

Two Mexican detectives were investigating the murder of Juan Gonzalez.

'How was he killed?' asked one detective. 'With a golf gun,' the other detective replied. 'A golf gun?  What's a golf gun?' 'I don't know, but it sure made a hole in Juan.' See more clean Golf Jokes

The Veterans Golf Association has negotiated with The Royal and Ancient Golf Club, based in St Andrews, Scotland to modify the Rules of Golf for Seniors Rule 1.a.5 A ball sliced or hooked into the rough shall be lifted and placed on the fairway at a point equal to the distance it carried or rolled into the rough with no penalty. The senior should not be penalized for tall grass which groundskeepers failed to mow. Rule 2.d.6 (b) A ball hitting a tree shall be deemed not to have hit the tree. This is simply bad luck and luck has no place in a scientific game. The senior player must estimate the distance the ball would have travelled if it had not hit the tree and play the ball from there. Rule 3.b.3(g) There shall be no such thing as a lost ball The missing ball is on or near the course and will eventually be found and pocketed by someone else, making it a stolen ball. The player is not to compound the felony by charging himself or herself with a penalty. Rule 4.c.7(h) If a putt passes over a hole without dropping, it is deemed to have dropped. The law of gravity supersedes the Rules of Golf. Rule 5. Putts that stop close enough to the cup that they could be blown in, may be blown in. This does not apply to balls more than three inches from the hole. No one wants to make a travesty of the game. Rule 6.a.9(k) There is no penalty for so-called "out of bounds." If penny-pinching golf course owners bought sufficient land, this would not occur. The senior golfer deserves an apology, not a penalty. Rule 7.g.15(z) There is no penalty for a ball in a water hazard, as golf balls should float. Senior golfers should not be penalized for manufacturers' shortcomings. Rule 8.k.9(s) Advertisements claim that golf scores can be improved by purchasing new golf equipment. Since this is financially impracticable for many senior golfers, one-half stroke per hole may be subtracted for using old equipment. Please advise all your senior friends of these important rule changes.

Every time, Peter, the man next door headed toward Paul's house, Paul knew he was coming to borrow something, he was always doing so and it was driving him mad. 'Peter won't get away with it this time, 'muttered Paul to Liz, his wife, 'Watch this.' 'Er, I wonder if you'd be using your hedge trimmer this morning?' asked Paul the neighbour. 'Crikey, I'm terribly sorry, 'said Paul with a smug look, 'but the fact of the matter is, I'll be using it all day.' 'In that case, 'smiled Peter, 'you won't be using your golf clubs, mind if I borrow them?'

The Language of Golf

Phil Beale, a member at Gudge Heath Golf Club, has a 60 foot breaking putt and makes a bet stating that he has a dollar that says, 'I can make this putt.' Everyone takes him up on the bet.  Phil duly misses the putt by 5 feet and says, 'You all owe me a dollar.' Of course, his golf mates all think he is crazy until Phil produces a dollar upon which he wrote, 'I can make this putt.' 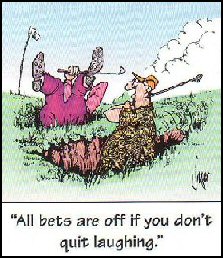 In My Hand I Hold A Ball, White And Dimpled, And Rather Small. Oh How Bland It Does Appear, This Harmless Looking Little Sphere. By Its Size I Could Not Guess, Or The Awesome Strength It Does Possess. But Since I Fell Beneath Its Spell, I've Wandered Through The Fires Of Hell. My Life Has Not Been Quite The Same, Since I Chose To Play This Stupid Game. It Rules My Mind For Hours On End, A Fortune It Has Made Me Spend. It Has Made Me Curse And Made Me Cry, And Hate Myself And Want To Die. It Promises Me A Thing Called Par, If I Hit It Straight And Far. To Master Such A Tiny Ball, Should Not Be Very Hard At All.

But My Desires The Ball Refuses, And Does Exactly As It Chooses. It Hooks And Slices, Dribbles And Dies, And Disappears Before My Eyes. Often It Will Have A Whim, To Hit A Tree Or Take A Swim. With Miles Of Grass On Which To Land, It Finds A Tiny Patch Of Sand. Then Has Me Offering Up My Soul, If Only It Would Find The Hole. It's Made Me Whimper Like A Pup, And Swear That I Will Give It Up. And Take To Drink To Ease My Sorrow, But The Ball Knows ... I'll Be Back Tomorrow.