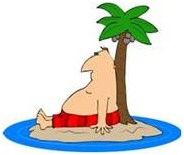 Here are ideas from which you can flesh out to create a wonderful retirement oration for a colleague.

Three elderly men, Eddie, Jenkin and Martin men go to the doctor's for
their memory test.  It's a miracle they remembered the appointment!
Anyway, the doctor begins by asking Eddie, "What is five times five?"
"191," is his reply.

The doctor rolls his eyes and looks up at the ceiling, and says to Jenkin,
"It's your turn. What is five times five?"
"Wednesday," replies Jenkin
man.

"That's great!" says the doctor. "How did you get your answer?"
"Easy," says Martin, "just subtract 191 from Wednesday." 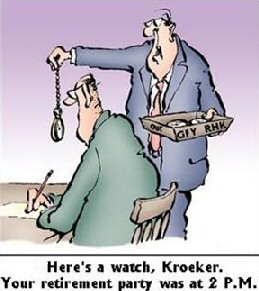 When a man retires and time is no longer a matter of urgent
importance, his colleagues generally present him with a watch. - R.C.
Sherriff

You Are Probably Ready to Leave If.... 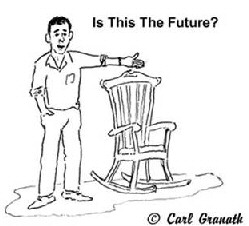 A priest was being honoured at his farewell dinner after 25 years in the parish.  A leading local politician, who was also a member of the congregation, was chosen to make the presentation and give a little
leaving speech at the dinner.  He was delayed so the priest decided to say his own few words while they waited. 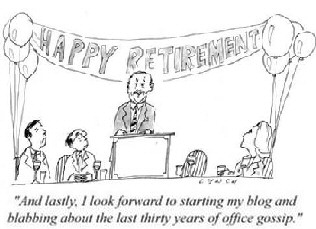 'I got my first impression of the parish from the first confession I heard here. I thought I
had been assigned to a terrible place.  The very first person who entered my confessional told me he had stolen a television set and, when stopped by the police, had almost murdered the officer. He had stolen
money from his parents, embezzled from his place of business, had an affair with his boss's
wife, taken illegal drugs. I was appalled.  But as the days went on I knew that my people were not all like that and I
had, indeed, come to a fine parish full of good and loving people.'

'I'll never forget the first day our parish priest arrived, 'said the politician.'
In fact, I had the honour of being the first one to go to him in confession.'

Claire, after retiring from a busy life in business, travels around the
country visiting antique shops trying to find bargains.

One day she goes to an antique shop in Stratford upon Avon, England.
Here, Claire speaks to Victoria, the shop's owner, 'When I was in here last
week I saw a big mug with a flat head that holds a lot of beer. I'd like to
buy it.'

'Sorry,' replied Victoria, 'but I can't possibly sell you that.'
'Oh, what a pity, but why not?' inquired Claire.

'Because,' said the owner, 'that's my husband.'

Three elderly gentlemen were talking about what their grandchildren would be saying about them fifty years from now. 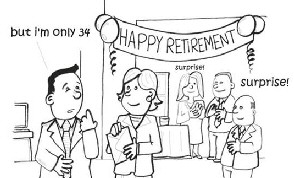 'I would like my grandchildren to say, 'He was successful in business', declared the first man.

'Fifty years from now, 'said the second, 'I want them to say, 'He was a loyal family man'
.

Turning to the third gent, the first gent asked, 'So what do you
want them to say about you in fifty years?'

'Me?'
the third man replied. 'I want them all to say, 'He certainly looks good for his age!'

Charlie, aged 86, was very contented living in the Clarendon Nursing Home
just outside Stubbington, Hampshire, England. After meeting Maisie, 77, he
grew even happier and fell deeply in love. Only last week Charlie plucked up
the courage, got down on his knees and told her there were two things he
would like to ask her. 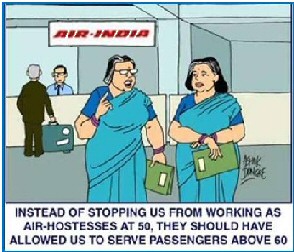 Maisie smiled and replied, 'Alright.'
Charlie asked softly, 'Will you
marry me?'

Delighted, Maisie answered him, 'Yes.' She then asked Charlie
what his second question was.
He replied, 'Maisie, will you help me get
up, please?'

How many retirees to change a light bulb?
Only one, but it might
take him all day.

A group of Americans was travelling on a bus tour through France and were
in the Loire Valley quite near to the town of Sancerre. They stopped at the
nearby village of Chavignol and visited a cheese farm where the world famous
'Crottin de Chavignol' goat's cheese is made; their guide, who was the
farmer's wife, led them through a process of cheese making, explaining how
goat's milk was used.

Madame showed the group a picturesque hillside where many goats were
grazing. These, she explained, were the older goats put out to pasture when
they no longer produced.  Madame then asked, turning to the group,
'What do you do in the USA with your old goats that aren't producing?'

One spry and very quick elderly gentleman answered, 'They send us on bus
tours.'

Secrets of Getting Old -
PowerPoint Presentation

Will and Guy offer these quotations as being suitable for inclusion in a
retirement speech.

A Poem For Your Farewell Speech

An Ode to Old Age

There's quite an art to falling apart as the years go by,
And life
doesn't begin at 40. That's a big fat lie.
My hair's getting thinner, my
body is not;
The few teeth I have are beginning to rot.

I smell of Vick's Vapour Rub, not Chanel # 5;
My new pacemaker's all
that keeps me alive.
When asked of my past, every detail I'll know,
But what was I doing 10 minutes ago?

Well, you get the idea, what more can I say?
I'm off to read the
obituary, like I do every day;
If my names not there, I'll once again
start -
Perfecting the art of falling apart

The basic idea is to convey the significance of the retirement milestone with a
humour and an eloquence that suits the occasion.

Firstly welcome everyone to the function; especially the most senior
members of the organization. Tell the assembled company something about yourself which will
introduce you to the guests who do not know you particularly well.

Compliment the ceremony itself and perhaps comment on the food or decor.  Inject some humour by relating events in the
planning of the retirement party that you found funny.

Talk about the retiree fondly and amusingly and anecdotally.  Have a
couple of stories that are perhaps touching or amusing.  Be sure not embarrass
anyone.  Talk about their achievements and your special relationship.  Talk
about some of the standout moments in their career, make sure the star of
the event is conveyed as an unforgettable individual.