These courtroom questions and answers are taken from a little book called 'Disorder
in the Court'.

For example:
Q: How
far apart were the vehicles at the time of the collision?

True conversations between lawyers and witnesses

Date of Birth
Q: What is your date of birth?
A: December twenty fifth.

Memory
Q: This myasthenia gravis-does it affect your memory at all?
A: Yes.

Q: And in what ways does it affect your memory?
A: I forget.

Q: You forget. Can you give us an example of something that You've forgotten?

Memory take two
Q:
How old is your son-the one living with you.
A: Thirty-eight or thirty-five, I can't
remember which.

Q: How long has he lived with you?
A: Forty-five years.

What's in a name?
Q: What was the first thing your husband
said to you when he woke that Thursday?
A: He said, 'Where am I, Cathy?'

Q: And why did that upset you?
A: My name is Susan.

When you go into court you are putting your fate into the hands of twelve
people who weren't smart enough to get out of jury duty. Norm Crosby

Milestone
Q: And where was the location of the accident?
A: Approximately
milepost 499.

Accident?
Q: What gear were you in at the moment of the car crash?
A: Gucci sweats and Reeboks.

Horn Player
Q: Did you blow your horn or anything?

A: After the accident?

Q: Before the accident.
A: Sure, I played horn for ten years. I even went to school for it.

Q: Do you know if your daughter has ever been involved in the voodoo or occult?
A: We both do.

Trooper
Q: Trooper, when you stopped the defendant, were
your red and blue lights flashing
A: Yes.

Q: Did the defendant say anything when she got out of her car?
A: Yes, sir.

Doctor (1)
Q: Now doctor, isn't
it true
that when a person dies in his sleep, he doesn't
know about it until the next morning?

Q: And what were you doing at that time?

Really Silly (1)
Q:
The youngest son, the twenty-year old, how old is he?

Really Silly (2)
Q: Were you present when your picture was taken?

Q: You were there until the time you left, is that true?

Indescribable
Q: Can you describe the individual? 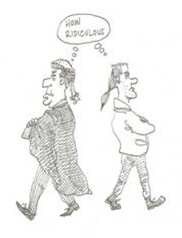 A: He was about medium height and had a beard.

Jerry Bartle was arrested and put on trial for robbing a local shop at
gunpoint. In his wisdom he decided that he would represent himself in court.
He appeared to be doing reasonably well until the shop's owner took the
stand to give his evidence.

She had identified him immediately as the robber, when Bartle jumped up
and yelled, 'You're lying! I should have blown your head off!' He paused,
then added, 'If I had been the one that was there.'

The jury found him guilty and Jerry Bartle was sentenced to thirty years
imprisonment.