The secret of a good sermon is to have a good beginning and a good ending, then having the two as close together as possible.  George Burns

Some
Clever and Amusing Thoughts on Being a Christian

The reverend King's sermon was based on forgiveness. He urged the
congregation not to harbour grudges against those who have offended them.

Reverend King asked everyone to stand. He then said 'those of you who
forgive and forget past grievances please be seated'. About half of those in
the church sat. The preacher quoted Biblical verses and repeated his
question to those still standing. At this point most sat down.

He pleaded further for them to follow the Christian way and one by one
they sat down. Just one old lady remained standing; 'Madam' reverend King
asked 'why can't you forgive your enemies?'

'Because I have none' she replied.

'That is remarkable; at your age to have no enemies is wonderful. To what
do you attribute this achievement?

She gave him her best smile and replied, 'the bitches have all died!'

Reverend Clive Morgan was completing his homily in St John's Church about the
dangers of alcohol and the need for moderation and temperance.

The Reverend Morgan then sat down. Jerry, St John's leading chorister stood
up and announced with a smile, 'For our closing hymn this Sunday, let us sing
together hymn number 109: 'Shall We Gather at the River.'

It was Palm Sunday but because of a sore throat, 5 year old Craig stayed home from church with a
babysitter. When the family returned home, they were carrying several palm fronds.

Craig inquired as to what they were for.

'People held them over Jesus' head as he walked by,' his father responded.

'Wouldn't you just know it?' Craig complained, 'the one Sunday I don't go and he shows up.' 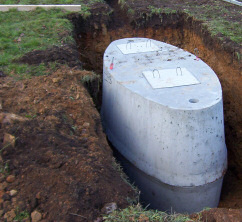 A recently ordained priest, Father Henry, was to hold his first ever
graveside burial service at a pauper's cemetery for an destitute man with no family or friends.

Father Henry, not knowing where the cemetery was, made several wrong turns and got lost.

He eventually
arrived an hour late, the hearse was nowhere in sight, the spade was next to the open hole, and the workmen were sitting under a tree eating lunch.

Father Henry, being a reliable young priest went to the
open grave and found the vault lid already in place. Feeling guilty because of his lateness, he preached an impassioned and lengthy service, sending the deceased to the great beyond in considerable style.

As
the good Father returned to his car, he overheard one of the workman say to the other, ' Do you know, fancy that, I've been putting in septic tanks for twenty five years and I ain't never seen anything like
that.'

Father John is walking down the street one day when he notices a Nathan, a very
small boy, trying to press a doorbell on a house across the street. However, Nathan is very small and the doorbell is too high for him to reach. After watching the boy's efforts for some time, Father John moves
closer to Nathan's position. He steps smartly across the street, walks up behind the little fellow and, placing his hand kindly on the child's shoulder leans over and gives the doorbell a solid ring.

Crouching down to Nathan's level, Father John smiles benevolently and asks, 'And now what, my little man?'

To which Nathan replies with a beaming grin, 'Now we run!'

Who is the Fool?

Father George was opening his mail one morning. Taking a single sheet of paper from an envelope, he found written on it only one word: 'Fool'.

The following Sunday, in church, Father George announced to
the assembled congregation, 'I have known many people who have written letters to me and forgotten to sign their names.  But this week I received a letter from someone who signed his name and had forgotten to
write a letter.'

Theresa, living in Nebraska, USA, decides to post the old family Holy Bible
to her brother in Maine. The postal worker enquires as to whether there is
anything breakable in the parcel.

'Only the Ten Commandments,'  Theresa replies
with a smile.

Marty, a little boy, was in church one Sunday with his mother Doris, when he started feeling sick.

'No,' his mother replied, 'the service isn't over yet.'

'Well, I think I'm about to throw up.' Marty announced.
'Then go out of the front door and around to the back of the church and throw up behind a bush.' said Doris.

'How could you have gone all the
way to the back of the church and returned so quickly?' Doris demanded.

'I didn't have to go out of the church, Mummy. They have a box next to the front door that says, "For the Sick" '.

'There will be a meeting of the Board immediately after the service,' announced Reverend Morris.

After the close of the service, the group gathered at the back of
church for the announced meeting. However, there was a stranger in their midst. He was a visitor who had never attended their church before.

'My friend,' asked Reverend Morris, 'did you understand that this
is a meeting of the Board?'

'Oh, yes,' came the rejoinder from the visitor, 'and after that sermon, I'm about as bored as you can get.'