Will and Guy's collection of jokes to celebrate:
La Fête Nationale
(Bastille Day).

Will and Guy have no intention of joining those people who wish to vilify
and verbally attack France and the French because of perceived slights on
the world stage. Some Americans and British seem to enjoy belittling the
French.

This site does not support nor reflect this attitude but would seek
merely to amuse and present readers with an opportunity to smile and laugh.
In fact, Will believes the Jefferson quote [below] reflects his Francophile
position and, indeed, the feelings of many:

Bon Mots that almost got away:

Will and
Guy's Ten Good Things about France and the French

Not forgetting the way in which the French play Rugby Union [le rugby]:
with strength, panache and Gallic flair. 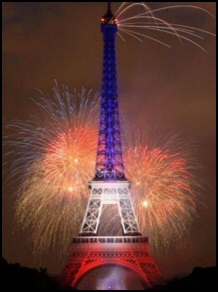 In retaliation against the
US House of Representatives changing the names of French fries and French
toast to Freedom fries and Freedom toast in their cafeteria, the French
government has announced that they will NOT change the name of American
cheese.

A group of British paratroopers were firing their weapons for
practice near the Kuwait/Iraq border. A group of Iraqi soldiers, fearing the
war had started, crossed the border and promptly surrendered to the
paratroopers. My immediate thought was, 'Finally, French culture has spread
to the Middle East.'

What do you call a Frenchman advancing on Baghdad?  A
salesman

Did you hear about the French Army rifle that was being
advertised on eBay the other day? The description included: Never shot.  Dropped once.

What do you get when a grenade is thrown into a French
kitchen?  Linoleum Blownapart.

How Many Frenchman Does It Take To Change a
Light Bulb? 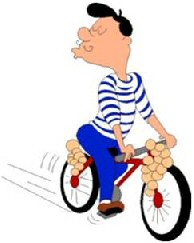 One of the famous mottos from the French Revolution is Liberty, Equality,
Fraternity.  Yet the official declaration was encapsulated in the 'The
Declaration of the Rights of Man and of the Citizen'.  One of it's main
principles was:

'Men are born and remain free and equal in rights. Social distinctions can be
founded only on the common utility.'

'La Marseillaise' - The song of the revolution

Claude-Joseph Rouget de Lisle composed 'La Marseillaise' in 1792.
It became the chant of the revolution. The first verse is: 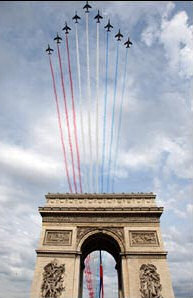 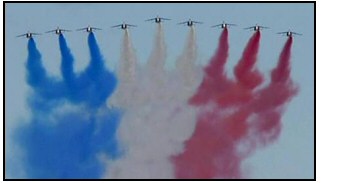 Jets of the Patrouille de France [the precision aerobatic demonstration team for the French Air Force].

Widely regarded as one of the world's most skilled teams, flying over the Arc de Triomphe
in Paris as part of France's annual Bastille Day celebrations.

Flag bearers
of the EU nations parade down the Champs Elysees on Bastille Day.

One of the defining rallying points of the French Revolution was the storming
of the Bastille on 14 July 1789.  Briefly, the French people, led by Danton
and others, rose up and overthrew the  monarchy of Louis XVI (and
Marie-Antoinette).

As an incident, the storming of the Bastille was of symbolic value than a
crucial military victory.  While the Bastille had in its time housed
political prisoners, there were fewer than 10 inmates at the time of the attack
on 14th July 1789.  Moreover, none of the prisoners was noteworthy and it
was the guns and other arms that was more valuable to the revolutionaries.