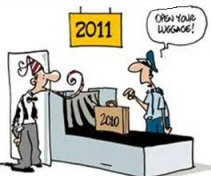 An optimist stays up to see the New Year in.
A pessimist waits to make sure the old one leaves.

A
New Year Prayer For the Elderly

God, grant me the senility to forget the people I never liked anyway,
The good fortune to run into the ones that I do,
And the eyesight to tell the difference.

Well, well.  It seems that your weight is perfect.  It just happens that
you are eleven feet too short.  See also Women's parts.

On New Year's Eve, Marilyn stood up in the local pub and said that it
was time to get ready. At the stroke of midnight, she wanted every husband
to be standing next to the one person who made his life worth living.

Well, it was kind of embarrassing.  As the clock struck - the
bartender was almost crushed to death.

On New Year's Eve, Daniel was in no shape to drive, so he sensibly left
his van in the car park and walked home.  As he was wobbling along,
he was stopped by a policeman.  'What are you doing out here at four
o'clock in the morning?' asked the police officer.

'I'm on my way to a lecture,' answered Roger.

'And who on earth, in their right mind, is going to give a lecture at
this time on New Year's Eve?' enquired the constable sarcastically.

A Senator in the USA was once asked about his attitude toward whisky.

'If you mean the demon drink that poisons the mind, pollutes the body, desecrates family life, and inflames sinners, then I'm
against it.  But if you mean the elixir of a New Year toast, the shield against winter chill, the taxable potion that puts needed funds into public coffers to comfort little crippled children, then I'm for it.  This is my position, and I will not compromise.'

To kick start my New Year, I took an IQ test and the results were negative.

The trouble with jogging is that the ice falls out of your
glass.

When I thought about the evils of drinking in the New Year.

I gave up thinking.

Definition of a hangover:
Wrath of Grapes.

Peter, at a New Year's party, turns to his friend, Ken, and asks for a cigarette.

'I thought you made a New Year's resolution to quit smoking,' Ken responds.
'I'm in the process of quitting,'
replies Peter with a grin. 'Right now, I am in the middle of phase one.'

Ring out the old, ring in the new

Trevor's New Year's Eve party was an annual occurrence with numerous guests arriving.  During the evening, a man knocked on the door, was greeted heartily although no one knew who he was, and was led
to where the drinks were, in the kitchen.  He sat there happily, chatting away, for a couple of hours before a strange light dawned on his face. 'You know,' he confided to Trevor, 'I wasn't even invited
to this party.  I just came over to tell you that some of your guests' cars are blocking my drive.'  He continued, 'My wife's been sitting out in the car waiting for me to get them moved, so that we can
go out.'

As in many homes on New Year's Day, Janet and Nigel, a happily married couple, faced the annual conflict of which was more important: the football match on television, or the lunch itself.

Hoping to keep the peace Nigel ate lunch with the rest of the family, and even lingered for some pleasant after-lunch chat before retiring to the lounge to turn on the television.

Some minutes
later, Janet looked in to see how he was and graciously even bought a cold beer for
Nigel. She smiled, kissed him on the cheek and asked what the score was.
Nigel told her it was half time and that the
score was still 0-0.

Jemima was taking an afternoon nap on New Year's Eve before the festivities. After she woke up, she confided to Max, her husband, 'I just dreamed that you gave me a diamond ring for a New Year's
present. What do you think it all means?'

At midnight, as the New Year was chiming, Max approached Jemima and handed her
small package.  Delighted and excited she opened it quickly. There in her hand rested a book entitled: 'The meaning of dreams'.

Auld Lang Syne was partially written by Robert Burns in the 1700's, it was first published in 1796 after Burns' death. Early variations of the song were sung prior to 1700 and inspired Burns to
produce the modern rendition. An old Scotch tune, 'Auld Lang Syne' literally means 'old long ago,' or simply, 'the good old days.'

Here are the lyrics:
however, many people seem to remember only the first
verse.

Footnote:
Please write to Will and Guy if you have any
New Year Eve jokes.