Good resolutions are simply checks that men draw on a bank where they
have no account.  Oscar Wilde

7 Quotations for the New Year

Our Five Further Favourite Funny Quotes for the New Year

Irish Toasts for the New Year: 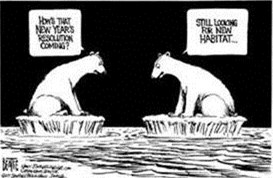 How to Tell That You have Entered a New Year:

The Wisdom of An Angel

An angel appears at a meeting of religious
leaders and tells their leader that in return for his unselfish and
exemplary behaviour, God will reward him with his choice of infinite
wealth, wisdom, or beauty.

'Done!' says the angel, and disappears in a cloud of
smoke and a bolt of lightning.

Now, all heads turn toward the
leader, who sits surrounded by a faint halo of light.

One of the
others whispers, 'Say something.'

The leader sighs and says, 'I
should have taken the money.'

One resolution I have made, and try always to keep, is this: To rise
above the little things. John Burroughs