Labor Day jokes reflect the the mood of this day being a quiet,
relaxing holiday, rather than a razzmatazz celebration of 4th of July.
However, here are amusing items that Will and Guy have unearthed for
this September Holiday.

Daughter (8):  Is Aunty Diane having
her baby today?
Mother:  Why did you think she is about to give
birth?

Daughter (8):  Because you said today was
Labour Day!

Jimmy Hoffa's Grave
The United Auto Workers union
decided 2013 would be a good year to get ariel photos of possible burial
sites for Jimmy Hoffa.

They figured that since Michigan just became a Right-To-Work state, he
probably rolled over in his grave.

In the week before Labor Day, Eli, a poor country farmer won
$480,000 in the Lottery.  As a treat he took his wife and their four children
to see the Labor Day parade in New York.

They booked into the Sheraton International at the corner of Park Circle
and Central Park North.  Having never been further than their local town,
Benton in Arkansas they were bowled over by glitz and excitement of the "Big
Apple".

Eli and his son Clem were especially mesmerised by a shiny box with
silver walls. They had never before met with doors that could move apart,
and then automatically come back together again.  Neither had seen an
elevator [lift] before.  Therefore, they were amazed when a little old lady
entered the shiny box and the door closed. The lights outside on the wall
flashed for a minute, then the doors opened and out came a beautiful young
woman.

Eli turned to his son Clem and said, 'Son, go get your mother.' 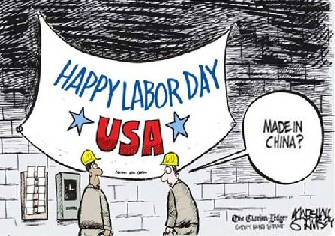 Labor Day Jokes If You Are Staying in a Hotel

Funny Labor Day Cartoon If You Are Staying At Home

Footnote: We are struggling to find good Labor day
jokes, so if you find any, please write and lest us know.  Meanwhile
....

American cousin:  How do you say 'Labor Day' in
Russian?
Russian cousin:  Another freezing and
snowy day.

In honor of Labor Day, here's a first person report of someone who was
not quite as successful as he had hoped to be in the job market:

As a young man

Something Different To Chew Over on Labor Day

According to a snack food study discovered by Will and Guy: The average
American will have three to five careers, 10 to 12 jobs and will hold each
job for an average of 3.5 years throughout his or her lifetime. These
figures we have collected from the U.S. Department of Labor.

After a positive response to his 1999 study linking snack foods to
distinct personality traits, Dr. Hirsch extended his study to reveal that
savoury snacks can also help determine an appropriate career. More than
18,000 adult volunteers across thirty-five occupations were surveyed to
determine the correlation between their occupation and their favourite snack
food.

Chip lovers are ambitious and successful: If you crave
potato chips, you should be a lawyer, tennis pro, police officer, CEO; they
are competitive and have high expectations, not only of themselves, but of
those around them. Competitive in business, sports and social situations.

Pretzels: fire-fighter, journalist, flight attendant,
veterinarian or paediatrician. Lively and energetic, those who crave
pretzels seek novelty and easily become bored by routine. They make
decisions based on intuition and emotion, especially in romantic
relationships.

Tortilla Chips: farmer, travel agent, chef, clergy or
news reader; they are perfectionists who are also humanitarians. Sticklers
for punctuality, you will rarely see a tortilla eater late for an
appointment.

Cheese Curls: real estate agent, psychiatrist or
producer. Formal, always proper, conscientious and principled, people who
crave this have a highly developed sense of integrity and maintain the moral
high ground with their family, co-workers and romantic partners. They plan
ahead for any possible catastrophe. With elastoplasts and batteries, the
cheese curl lover's house is always stocked and ready.

Popcorn: teacher, artist, truck driver, nurse, judge or
neurosurgeon. They are self-assured and confident, those who prefer popcorn
are best described as "take charge sort of people." A popcorn enthusiast
will not hesitate to assume extra work on the job or take on extra duties at
social gatherings. Even though they are self-confident, popcorn lovers are
modest and humble, and would never be considered show-offs.

Nuts: plumber, architect, sanitation worker,
cardiologist or politician. Those who prefer nuts tend to be easygoing,
empathic and understanding. When confronted with an emotionally charged
situation, they can be counted on to keep calm and not join the fray,
allowing time for the emotional upheaval to pass. Their even handed nature
makes them well suited for dealing with the public during emergency
situations. While nut aficionados may not always be leaders, it is their
demeanour and assistance that allows the family or workplace to succeed.

Snack Crackers: stockbroker or professional race car
driver. Snack cracker devotees tend to be contemplative and thoughtful, and
base their decisions on solid reasoning instead of their emotions. They
value their private time and are most creative when allowed to be alone,
free from daily responsibilities and interruptions.

Meat Snacks: dentist or bartender. Those who crave a
satisfying stick of beef jerky or a mouth-watering bag of pork rinds are the
life of the party. Gregarious and social, meant snack lovers are at their
best amidst the company of others. They are loyal and true friends who can
always be trusted, and will make extraordinary self-sacrifices to please
others.

Plus one more: Going to work for a large company is like getting on a
train. Are you going sixty miles an hour or is the train going sixty miles
an hour and you're just sitting still?  J. Paul Getty

Unreasonable Labor?
'I'm never going to work for that
man again.'
'Why, what did he say?'

The Final Payment
Roland, a businessman, is on his
deathbed so he calls his friend and says, 'Eli, I want you to promise me
that when I die you will have my remains cremated.'

Roland replies, 'Just put them in an envelope and mail them to the
Internal Revenue Service and write on the envelope, 'Now you have
everything.'

The Worker
The Castle Rock, Colorado, Wage and Hours
Government Department claimed Mickey was not paying proper wages to his help
and sent an agent out to interview him.

'I need a list of your employees and how much you pay them,' demanded the
agent.

'Well,' replied old Mickey, 'There's my ranch hand who's been with me for
3 years. I pay him $600 a week plus free room and board. The cook has been
here for 18 months, and I pay her $500 a week plus free room and board. Then
there's the half-wit who works about 18 hours every day and does about 90%
of all the work around here. He makes about $10 per week, pays his own room
and board and I buy him a bottle of bourbon every Saturday night.'

'That would be me,' replied old rancher Mickey.

A Brief History
of Labor Day in USA

Compared with other celebrations, Labor Day is the quiet day.
There maybe a few students using this as an opportunity for a last fling
before knuckling down to the Fall term, but for most people, Labor day
is just a welcome day off work.

America has celebrated Labor Day on the first Monday in September since
the 1882.  The original idea was to have a street parade to show off 'The
strength and esprit de corps of the trade and labor organizations'.
When Labor Day was first proposed people worked 12hr days.

Later, Labor day featured speeches by prominent men, it's true to say
that these had a mixed reception, compared with the enthusiasm for a day off
work.  In the 21st century politicians never miss the chance to plug
their policies, especially in Presidential election years.

While the first Labor day was originally held on a Tuesday, it was soon realized that
the first Monday was a better day for this day of relaxation.
Principally because we get a long weekend.

In any given year there is never much doubt about the date for Labor day,
because it's always
first Monday in September, nevertheless, here are the specific dates.
One reason for noting these dates is that the NFL season kicks off on
the Thursday following Labor day.  This explains why
sometimes the games start on the first Thursday in September, while in
other years we have to wait for the second Thursday before we see the
first grid-iron action of the season.

While not many other countries celebrate Labor Day as such, most
nationalities have a public holiday to celebrate the end of summer.
For example the UK has a bank holiday on the last Monday in August.