Will and Guy have come the conclusion that
Good Friday is one of the few topics about which there are hardly any funny and clean jokes.

However, once you think about it, it's compulsive to research the reason
behind the name Good Friday.

One day just before Easter Eddie pulled into the supermarket car park.
His wife Brenda had picked up a few things and was waiting for him.

"Hi, honey," Eddie cheerfully said as Brenda got into the car. "How was
your day? 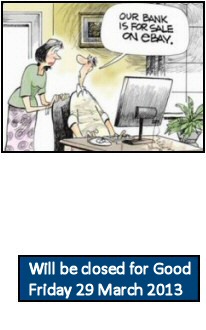 "I can't believe it," Brenda said. "It looks like our bank
is in trouble."

"It's closing at the end of the week," Brenda replied.

That can't be right," Eddie said. "It's a national bank!"

"Well it's true," Brenda came back. "I have seen the sign in the window."

"Drive passed the bank and you'll see," Brenda replied. Eddie headed in
the direction of the bank.

"Right there," Brenda said as they drove by the bank. "See the sign? It
says, 'We Will Be Closed for Good  Friday!' "

Roger left for the service at 10:45 on Good Friday morning.
However, instead
of going to church, he stayed out the entire weekend partying with the boys and
spent his entire pay packet.

Finally, Roger appeared at home on Sunday night, and obviously he was
confronted by his angry wife,  Martha who castigated Roger for nearly two
hours with a tirade befitting his actions.  Finally, Martha stopped the
nagging and said to Roger, 'How would you like it if you didn't see me for
two or three days?'

Roger replied grimly, 'That would be fine with me.'

Monday went by and he didn't see his Martha. Tuesday and Wednesday came
and went with the same results.

By the Thursday, the swelling had gone down just enough so that Roger he could
see Martha a little out of the corner of his left eye

Which day of the year do chickens hate the most?
Good Fry-day! 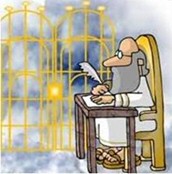 One Good Friday a priest and a taxi driver both died and went to heaven.  St. Peter was at
the Pearly gates waiting for them.

The taxi driver did as he was told and followed St Peter to a mansion. It
had everything you could imagine from a bowling alley to an Olympic size
pool.

Next, St. Peter led the priest to a rough old shack with a bunk bed and a
little old television set.

'Wait, I think you are a little mixed up,' said the priest. 'Shouldn't I
be the one who gets the mansion? After all I was a priest, went to church
every day, and preached God's word.'

'Yes, that's true.' St Peter rejoined, ' But during your sermons people
slept.  When the taxi driver drove, everyone prayed.'

Footnote:
If you can find a funny but clean Good
Friday joke, please send it to us.

In truth, Mourning Friday would be a better description for the day when
Christ was crucified.  However, there are two possible derivations of
'Good Friday'.  One is that 'Good' is a transformation of 'God's
Friday'.  Holders of this theory point out 'Good be with ye' has become
'Good bye'.

The other theory is that the choice of the word 'Good' is deliberate, it's
just that our perspective had changed.  If in the first century after
Christ's birth Friday was traditionally a feast day, then this particular
Friday was the most significant of the whole year.  Another idea,
proposed by the most devout is this is Good Friday in that it's the ultimate
test of the Christian faith; namely that Christ died, and was resurrected on
the third day.

It maybe useful to look for clues in the name that other languages give for
this day, for example, the Eastern Orthodox Church call this day Great and
Holy Friday.

When is Good Friday?

Apart from being the day when Christ was crucified, Good Friday is two days
before Easter Sunday (Christ arose on the third day).

Here are
specific dates for other years:

The day before Good Friday is known as Maundy Thursday.

In Germany
on this day they dye eggs green.

Known as Ostern in German speaking countries of Austria, Germany and
Switzerland, it is important to Catholics and Protestants alike.

Easter customs can be traced back to pre-Christian, pagan rites that were
related to the beginning of Spring and fertility, symbolized by daffodils,
rabbits and eggs.

The art of decorating hollowed out eggs, Easter eggs or Ausgeblasene
Eier, is an Austrian and German tradition.

Nowadays, the Satzvey Castle, which is a beautiful, moated castle in
Germany, has an Easter market that displays elaborately decorated eggs along
with spring inspired arts and crafts.

The town centres in Southern Germany decorate their fountains for two
weeks starting on Good Friday and Northern Germany celebrates by burning big
piles of logs, sometimes with a witch puppet to signify the end of Winter.
Beer, hot punch and grilled sausages are served.

In Franconian Switzerland to Northern Bavaria, the city fountains are
decorated with real, blown eggs.

The key to understanding the unusual word 'Maundy' is remembering
Christ's commandment at the Passover.  This was the day when Jesus
Christ commanded the 12 disciples to break bread and drink
wine in his memory.  When the gospels were written in Latin, commanded
was written as mandate (mandatory) and this later became transposed to
'Maundy'.

Until the Middle Ages the reigning monarch of England washed the feet of
the poor on Maundy Thursday.  While this custom died out after the
reign of Charles II, the tradition of giving money to the poor lived on.
Our present Queen still bestows Maundy money to the needy on the Thursday
before Easter Sunday.  These silver Maundy coins are specially minted,
and four coins are placed in each bag.  One bag for each year of the
monarch's age is then distributed to selected English men and women.

The basis for selection is two fold, recipients are pensioners who have
given service to their community.  In 2009 Kathleen Grimwood aged 107,
was among 83 women who received Maundy money from the Queen.  As usual,
an equal number of men also received a pouch containing Maundy coins.

Footnote:
If you can find a funny but clean Good
Friday joke, please send it to us.