Have you ever received a letter where the signature at the bottom of the page accurately reflects the profession
of the person writing?  Or perhaps in a newspaper you have come across an appropriate name which matches the type of job the person has.  For example an editor of the Christian Science Monitor had the name of
Silence Bellows.

Guy and Will have researched some more which may make you smile.  Where possible we have shown where the names come from. Sadly we cannot guarantee their accuracy:

Footnote:
If you know other funny name / job
combinations like these please send them into us.

An aptronym or aptonym is a name aptly suited to its owner. They can
often be hilarious, amusing and funny. Will and Guy have researched these
examples for you to enjoy.

Ones for luck: Roy Grout is
a bricklayer who has a mate named Morris Glaser who does the windows.

The name 'aptonym' is derived from the old English word 'apt' meaning
'exactly suitable', and the Greek 'onuma' or 'name'.

Here are Relatives of Aptonyms 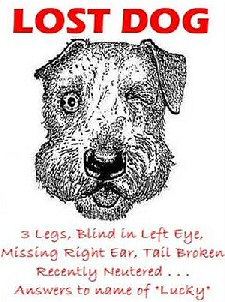 Nominative sounds like Latin grammar, but in this context nominative just
means name.  The underpinning concept is that Asian parents apply
expectation theory to choosing their child's name, as a result their
offspring are pre-determining to get on in life.  While Carl Jung
espoused this view in a paper on synchronicity, this view of selecting boys
names in particular with an eye to their role in society goes back to the
dawn of civilization.

Another variant of nominative determination comes with surnames in
Western societies.  Here are examples

There is a Zulu tradition to name children after events that occur near
their birth - fair enough.  However, Will and Guy pity these poor
children who have been given these unfortunate names following the
2010 World Cup in
South Africa.  Coach Sibise, Stadium Gumbi, Tickets Ngubane and Park n
Ride Khumalo.  We also wonder about the father of Offside Mchunu.