Will and Guy have a wide range of food jokes, funny pictures and amusing stories.  Variety really is the spice of life.

Did you hear about the fight in the biscuit tin?

The bandit hit the penguin over the head with a club, tied him to a wagon wheel with a blue ribbon and made his breakaway in a
taxi!

The names of
chocolate biscuit bars available in the United Kingdom, and perhaps, elsewhere. 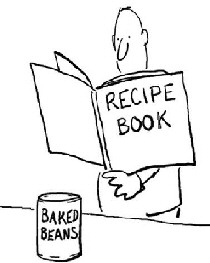 Nigel retired before Sally, and as a result he would do more of the chores.  For example on Friday he would dust and vacuum the house. On two other days he would prepare and cook the evening meal.

Now Nigel's
forté was certainly not cooking. One recipe asked for 'seasoned flour' to be added. Nigel searched the kitchen cupboards and found the plain flour and the self-raising flour. In the end he had to ring Sally at
her work to ask where she kept the 'seasoned flour'. 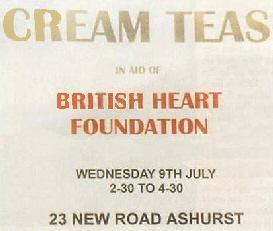 Kevin was furious when his steak arrived cooked too rare.

'Of course I did,
sir, I can't thank you enough, sir,' replied the waiter. 'I hardly ever get
a compliment.'

Last week, Alex and Ann went to a restaurant for dinner in Albert Road,
Southsea. They scanned the menu, then promptly ordered two steaks.

The waiter duly brought the steaks with fries and salad. Alex quickly
picked out the bigger steak for himself

Ann was decidedly unhappy about that, 'When are you going to learn to be
polite, Alex?' she complained.

Alex responded by asking, 'If you had the chance to pick first, which one
would you pick?'

'Then what are you whining about then? The smaller piece is what you
want, right?' Alex concluded.

So Hungry I could Eat the Plate

Chen Liang-erh, 50, an amateur inventor living in Taipei, Taiwan has
perfected an edible plate. It is made from wheat grain, and he plans to
mass-produce it with other edible crockery including cups, bowls and food
containers.

Will and Guy are aware that he argues that hungry diners, tempted to lick
a plate after a delicious meal, can now go a step further and demolish the
whole lot. Sadly, we have learned, the plates have the taste of unsalted
popcorn - not exactly an exciting culinary delight.

In his favour Chen says the crockery can be boiled and will provide a
nutritious meal for your pet. Lovely.

The best way to lose weight is by skipping ..... snacks and dessert.

One guideline applies to fat and thin people alike: if you're thin, don't
eat fast. If you're fat, don't eat - FAST.

Inside me lives a skinny woman crying to get out. But I can usually shut
her up with cookies..........

A women's group was discussing diet tips. When it was mentioned that
getting enough exercise and sleep were just as important as watching food
intake, one woman responded with surprise that sleep was a factor. Another
replied, 'Of course sleep is a factor. The only time I'm not eating is when
I'm sleeping.'

One of life's mysteries is how a two-pound box of candy can make a woman
gain five pounds.

The only exercise I get is jumping to conclusions.
See our
fitness workout.

Half A Diet is Better than No Diet at All 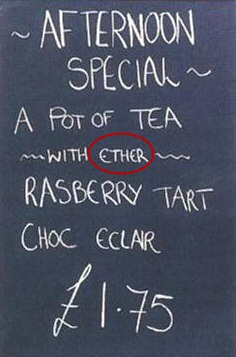 Genevieve belongs to our Diet Club and she was lamenting that she had
gained weight.

She told us that she had made her family's favourite and luscious cake
over the weekend, and added that they'd eaten half of it at dinner that
evening.

The next day, Genevieve continued, she kept staring at the other half,
until finally she cut a thin slice for herself. One slice led to another,
and soon the whole cake had vanished.

Genevieve smiled broadly and quipped, 'He never found out. I made another
cake and ate half of that too.'

My friend Ben is well known for his rather 'in-your-face' eco-friendly
and green credentials.

We were eating at a Chinese restaurant in the High Street when an elderly
waiter set chopsticks at our places. Ben made a point of reaching into her
purse and pulling out her own pair with a flourish.

'As a keen environmentalist*,' Ben declared loudly to no-one in
particular, 'I do not approve of destroying bamboo forests for throwaway
utensils.'

*Fact: China uses 45 billion chopsticks per year. 25 million trees are
chopped down to make them!

Will and Guy have to be honest and tell you that laughter will not enable
you to lose weight. However, if you feel fed-up with all the pressures of
dieting perhaps you can laugh, or at least smile at some of our random Food
and Diet Trivia 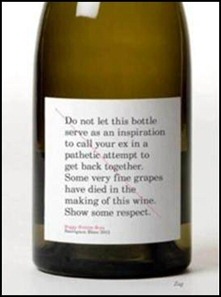 There were 2 eggs boiling in a pan.

One egg says to the other, 'My, it's hot in here.'
The other replies,
'You think that's bad?  When you get out they bash your head in.'

It's more fun to talk to someone who doesn't use long difficult words but
rather short, easy words like 'What about lunch?' from Winnie the Pooh by AA
Milne.

The following are items found overseas in which people have made unusual
and funny use of English words for various products, and bizarre and amusing
menu items in restaurants:

Laugh with us as you read these hilarious examples

Pigeon's milk is one of the desserts on offer at a Latvian restaurant.
Also on the menu is a main course of 'grilled surgeon'.  Here are more
funny food examples:

Six one and half a dozen of the other.

Yvonne arrived at the whopper burger bar and read on the menu that she
could order 6, 9 or 12 chicken nuggets. She promptly and politely requested
half a dozen nuggets.

'We don't do half a dozen nuggets,' responded the teenager at the counter
rather tersely.
'You don't?' Yvonne inquired quizzically.

'We only have six, nine, or twelve,' came the reply from the youngster.

'Right,' said Yvonne with a broad smile, 'Let me get this straight. I
can't order half a dozen nuggets, but I can order six?'

'Correct,' was the bland reply.

Yvonne shook her head rather sadly and ordered six nuggets.

Our overall philosophy on food humour is a varied diet of amusing videos, funny, yet clean
food jokes, blended with thought provoking pictures and the odd story.