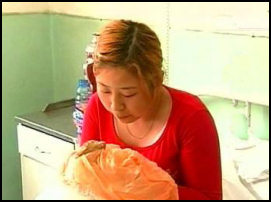 The 18-year-old from Inner Mongolia was taken to Beijing by her parents, who wanted to know why she finds dirt appetising. She told Chinese television that she started the habit when she was just 7 years old when she consumed dirt that was attached to the roots of grass. Yellow mud is her favourite. Her eating habits have caused problems for the family's next-door neighbour, who has a mud roof. Chinese television reported that the woman can't help herself and keeps eating his roof.

Eccentric Chinaman Li Sanju claims to have survived for two years eating nothing but leaves and grass. The Chinaman from Niuwei village, Guangdong province, says he is perfectly happy with his unusual diet. He informed Will and Guy that he looks no different to other people in his village - but admits he does smell strongly of grass. 'I watched a TV programme which said a man can live more than 10 days without food but just water, so I thought I would try living on the natural things near my home,' he said. At first, he tried eating grass in a field like cattle - but it tasted bitter and made him ill, we have found, 'I suspect that the field grass has been polluted by pesticides, so I changed to the plants in the mountain behind my house, and I never had any problem,' he added. 'I used to be known as a sick man in the village, always in hospital, but since I changed my diet, I've never been to see the doctors. Even the tumour on my right foot has disappeared.' The Local Traditional Chinese Medicine Hospital said most of the plants were edible and not toxic but he did not recommend Li's diet to us, which is a great relief. See more funny food stories from China

People Do Have the Funniest Eating Habits [thanks to Frank Sabatini Jnr]: